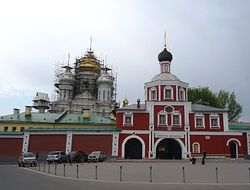 The prefect of the Central Moscow Region, in which the Conception Monastery is located, spoke about the restoration under way there in preparation for its 650th anniversary, reports Patriarchia.ru.

Work on the restoration of the Nativity Cathedral is being directed by Abbess Juliana (Kaleda) of the monastery. The scaffolding around the cathedral domes will soon be removed, and work will soon begin on the iconostasis.

"I think that many construction contractors could learn a thing or two from Abbess Juliana," the prefect remarked. "As a professional builder and manager, she is carrying on the work at an amazing pace."

Part of the restoration work was funded by the Mayor of Moscow, Yuri Luzhkov, and the prefecture of the Central Admistrative Region. Reconstruction of the Church of the Savior on the Sennaya square begins in St. Petersburg The Conception of the Holy Virgin Theotokos by Saint Anna
Commemorated December 9/22
Sergei Bulgakov
Struck by the speech of the High Priest, as though by the awesome verdict of the judgment of God Himself, the righteous man had no time even to withdraw from the altar, as a new heavier insult struck his hearing. One of the Israelites bringing his gifts, pushed him away, said, “Depart from here, did you not hear that you are unworthy to bring gifts to God together with us, because you have not left offspring for Israel?” With deep humility Joachim accepted this accusation as if it were from the mouth of the very God, and with deep sadness left the temple.
×