The Conception of the Holy Virgin Theotokos by Saint Anna 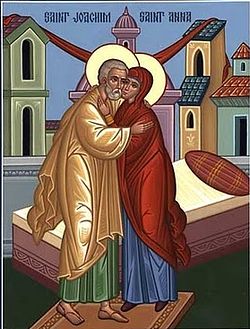 Saints Joachim and Anna who lived in Nazareth in Galilee “in the whole piety of the Mosaic law,” up to their very old age had no children. On one great feast the righteous Joachim, according to the custom of the law, gave gifts and offerings to God in the temple in Jerusalem. The high priest Issachar who accepted the offerings of the numerous throngs of people, did not want to accept the gifts from Joachim, telling him: “It is not right to accept gifts from you as from a true Israelite; for you are childless. Because of some kind of heavy sins you have not received the blessing of God.”

Struck by the speech of the High Priest, as though by the awesome verdict of the judgment of God Himself, the righteous man had no time even to withdraw from the altar, as a new heavier insult struck his hearing. One of the Israelites bringing his gifts, pushed him away, said, “Depart from here, did you not hear that you are unworthy to bring gifts to God together with us, because you have not left offspring for Israel?” With deep humility Joachim accepted this accusation as if it were from the mouth of the very God, and with deep sadness left the temple. With a painful heart he recognized himself unworthy not only to remain in the sight of the house of God, but also to return to his own house, and he withdrew to the desert, where he grazed his cattle. In fasting and repentance, in tears and prayer he spent 40 days, imploring the Lord to forgive him all his sins, to remove his dishonor in Israel, to bless him in old age by the birth of a child.

The inexpressible sadness of heart struck the righteous Anna also, when she heard about the disgrace of her spouse before the altar of God before of the sons of Israel on the day of the great feast of the Lord. She herself was judged by all for the guilt, the sin of all Israelite wives, unworthy to even see the light of God because she was deprived of God’s blessing. Having confined herself to her room, in fasting and repentance, in tears and in sighing she cried out to the Lord day and night, imploring Him not for her sake, but for the sake of the piety of her righteous spouse, to relieve them from the curse of childlessness, and to bless the fruit of her womb.

Alone in the garden, under the shade of a laurel tree, Saint Anna saw a bird’s nest, about which the mother flew feeding her nestlings. Everything in nature, Saint Anna thought, gives birth; everything is by the blessings of God: the birds of the sky, the animals of the forest and the very earth in growing various fruits, but she alone is deprived of happiness and the blessings of God. Even more fervently Saint Anna began to pray to the Lord and the Lord heard her tearful prayer. She heard the voice of an angel proclaiming to her, “God has granted you the desire of your prayer.”

The Angel announced to her: “You will conceive and give birth to a most blessed daughter, whom all with knees to the ground will bless, and who will bear the salvation of the world. Her name will be Mary.” Overjoyed by the heavenly annunciation, Saint Anna quickly sped to Jerusalem to pour out before the Lord in His sacred temple her feelings of thanksgiving and the joy that filled her heart.

At the same time the heavenly messenger brought the same joyful annunciation to Joachim, who was weeping and praying in the desert. The angel commanded him to go to Jerusalem, where he returned to his wife. Before the doors of the temple of God the rejoicing spouses met, with one voice glorified and thanked the Lord God again and again, for He had seen their humility. With one voice they promised before the Lord to devote to Him their promised child. Soon, after returning to their home, Saint Anna conceived in her womb “the divine rod, which will sprout the mysterious flower of Christ, the Creator of all.”

From Manual for Church Servers

Sally Iloff8/12/2015 1:25 am
Wonderful! How wonderful God works in mysterious ways to bring joy to the righteous people!
×