Why is the Feast of the Apostles Peter and Paul on July 12? 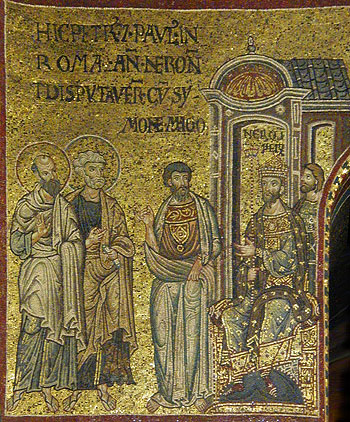 The holy Apostles Peter and Paul before Nero. Byzantine mosaic.
The holy chief Apostles Peter and Paul, according to Church tradition, received their martyrdom on the same day—June 29 (which falls on July 12 NS, for those following the Julian Calendar). This date is shown in the ancient calendars that have been passed down to us (the Roman calendar of the fourth century; the Carthaginian calendar of the fifth century), in the martyrologue of Blessed Jerome (fourth century), and in the sacramentaria of Pope Gregory the Great (fifth century).

Researchers consider that the holy Apostle Peter arrived in Rome in the year 67. There he converted many people to Christ. In Rome he wrote the Second General Epistle to Christians who had converted from Judaism and paganism, and who lived in Asia Minor. The Lord informed him of his pending departure from earthly life: Knowing that shortly I must put off this my tabernacle, even as our Lord Jesus Christ hath shewed me. Moreover I will endeavour that ye may be able after my decease to have these things always in remembrance (2 Pet. 1:14–15). From the beginning of the persecutions begun by Emperor Nero, the Apostle Peter’s disciples persuaded him to leave Rome, so that they would not lose their pastor. Peter consented out of his love for them. When he left the city, he met Jesus Christ on the ancient Appian Way. When Peter asked the Lord, “Whither goest Thou, Lord?” the Savior replied, “I am going to Rome, to be crucified again.” There is now a church on that place (Domine, Quo Vadis?), where is a copy of the stone upon which the Lord’s footprints remained. The original stone with the Lord’s footprints is in the Church of St. Sebastian in Rome. After returning from Rome, the holy Apostle Peter was imprisoned in the Mamertino Prision (Carcere Mamertino), which was situated on the slope of Capitolia Hill below the Church of St. Joseph the Bethrothed (San Giuseppe). From Mamertino prison the Apostle Peter was taken to the Vatican Hill, which is situated on the right bank of the Tiber River. Nero’s circus was located on the hill. Here the holy Apostle Peter received his martyric death. Here were fulfilled the Savior’s words in the Gospel of St. John to Peter about his death. Verily, verily, I say unto thee, When thou wast young, thou girdest thyself, and walkedst whither thou wouldest: but when thou shalt be old, thou shalt stretch forth thy hands, and another shall gird thee, and carry thee whither thou wouldest not. This spake he, signifying by what death he should glorify God. And when he had spoken this, he saith unto him, Follow me (Jn 21:18–19). Just as his Teacher, the Apostle Peter was raised upon the cross, but out of humility asked that he be crucified upside down. Here, on Vatican Hill, he was buried by the holy Hieromartyr Clement of Rome and other disciples. Roman Christians preserved this place with great reverence. In 1941, when excavations were conducted in basement of the St. Peter’s Cathedral, a slab was found in that very place bearing the quite expressive inscription in Greek: “Peter is here.”

We do not know when the Apostle Paul came to Rome. As to the Apostle Peter, the Lord also revealed to His chosen vessel (Acts. 9:15) the time of his death: For I am now ready to be offered, and the time of my departure is at hand. I have fought a good fight, I have finished my course, I have kept the faith: Henceforth there is laid up for me a crown of righteousness, which the Lord, the righteous judge, shall give me at that day: and not to me only, but unto all them also that love his appearing (2 Tim. 4:6–8). The reverent memory of Christians has retained the place where the two Apostles parted with each other from this life. On that place, along the Via Ostiensis (in Italian, Via Ostiense), is a church dedicated to both Apostles. The Apostle Paul was taken to a place outside of the city, now called Aсque salvie. As a Roman citizen he could not be crucified, and so they beheaded him there. Most researchers place the Apostle Paul’s martyric death in the year 67 A.D.

A church was built in the year 324 by St. Constantine the Great over the grave of the Apostle Paul.