Faith and Works in Solovki

In early July, a youth group comprised of people from the various dioceses of the Russian Orthodox Church Outside of Russia made a pilgrimage to the Solovetski Islands. Beforehand, they visited Moscow’s Sretensky Monastery, where Archimandrite Tikhon (Shevkunov) blessed them to perform a moleben to Holy Martyr Archbishop Ilarion and to venerate his relics, and then wished the pilgrims a safe voyage to a site holy to every Orthodox Christian. Upon their return to Moscow, the visitors from abroad shared their impressions. 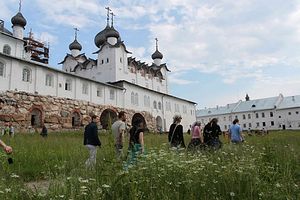 – For four youth, it was very important to make the effort to perform a pilgrimage to Solovki, which is a union of the spiritual, historic and natural.

We spent six days at Holy Transfiguration Solovetsky Men’s Monastery; the kids attended divine services, they prayed, received Communion, met with the brethren of the monastery and other pilgrims, and also made a pilgrimage to Anzer, walking the entire island on foot and ascending the cliffs to Golgotha Skete.

I cannot neglect to recall the story about how, nine years ago, our Metropolitan Laurus of blessed memory, even before his election as First Hierarch of ROCOR, visited Anzer, where he picked up a branch to use as a walking stick during his pilgrimage. After his return to the US, this stick was sanded and lacquered, and Vladyka preserved it as a souvenir of Solovki.

Here, on the Solovetski Islands, one feels a special sanctity, spiritual elevation, the greatness of the Russian spirit and at the same, one feels profound sorrow for the thousands and thousands of people who were martyred, one sees with pain in one’s heart the destroyed churches and the lawlessness—a concentrated point of the fate of Russia. In the world today, one sees the manifestation of one of these extremes or of another, but there they came together, and this made an indelible impression on us.

We were given obediences (we chopped and stacked wood) together with students from the St Tikhon Orthodox Humanitarian University, and at the same time we came to know them better, we talked about problems facing youth, relaxed by the campfire, sang songs… Now we are considering plans of future contact with them, and joint projects along the lines of the meeting of our youth and the young people of St Petersburg Theological Academy last January.

It is worthy of note that the pilgrimage to Solovki, made with the financial support of the Fund for Assistance to the ROCOR, was one of the links in the International Orthodox program “Faith and Works.” I would stress in particular that His Holiness Patriarch Kirill, in his letter to His Eminence Metropolitan Hilarion, Primate of ROCOR, supported our “Faith and Works” endeavor, expressing the hope that “it would enable the mutual enrichment of the youth in joint work to the benefit of the holy Church, and will also make a significant contribution in the work of joint witness in the bonds of love in Christ, which spiritually unites all of us.”

So “Faith and Works” is truly manifested in our faith and our deeds. For it is very important not only to listen to speeches at conferences—though that is important, too—but to work together, as we just did in Solovki. For then young people from different countries—and these are future politicians, diplomats, businessmen, clergymen—will better understand each other and will cooperate in the future.

Of course, we would like to invite young people from Russia to visit us. But for this we need for youth pilgrimage centers to work in the US, which we still need to organize, maybe with the help of the Russian government. Without a doubt, the development of such a network of cultural-pilgrimage centers abroad could help draw our young people together—those abroad and those in Russia. 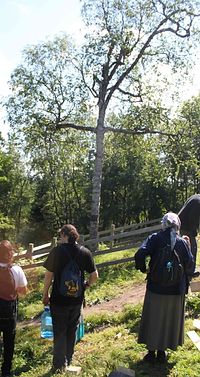 – If you ask me what detail I remember most of all from our pilgrimage, it would be a birch tree that grew among the graves on the island of Anzer in the form of a cross (during the godless years it was a prison camp): a straight trunk rises above, while two branches stretch out in either direction, like the crossbar. There were a great many hand-made crosses erected in Solovki at one time, later destroyed by the Bolsheviks, and here, by Divine Providence, a cross arose, not made by human hands. I must say that this birch-tree cross has fallen into my soul forever.

As we learned, the Bolshoy Island there now has a cross-making workshop where crosses are being made according to ancient samples: they are being erected on the islands of the archipelago in important sites for veneration. In general, I can say that the history of Anzer and the Solovetski archipelago can be read about, but one will never sense the atmosphere until one visits in person. This atmosphere can pour new life into you, give you support.

Many churches are now being restored on the islands by the hands of volunteers and students. It was very interesting for me to get to know the students of St Tikhon Universaity (these are very highly-educated and spiritually-mature young people), to garner the Russian spirit, if one can put it that way. At the same time, we would take hikes, marvel at the wondrous northern landscape, the Svyatoye [“holy”] Lake, the shores of the White Sea, and this time drew us together. Next year, St Tikhon’s students will again have a camp in Solovki, and they invited us to come. When we left Solovki, we took with us a little part of Russia. 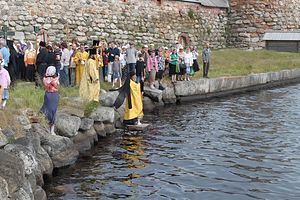 – I had known little about Solovki before. When Fr Andrei invited me to participate in the pilgrimage, my mother reminded me that as a child I often heard her sing the song of Ataman Kudeyar, who was a bandit, and then later went to a monastery to pray away his sins. What monastery exactly was unclear; maybe it was Solovetsky, in the Northern Russian lands…

And suddenly I found myself on that very spot, that legendary place, and I was awestruck, how many people are streaming in to venerate the spiritual wellsprings of Orthodoxy. Here indeed there is an unusual atmosphere of peace and spirituality, especially for someone from New York, with its hellish rhythms. This is especially sensed on the island of Anzer, where, according to tradition, elders who were experienced in piety settled to devote themselves to prayerful podvig in the remote peacefulness.

We learned of the terrible history of Solovki, where many Russians suffered repressions under the communist regime. This was a sad page in history, but the most important thing is that this is a holy place, suffused with prayers and washed with the tears of the New Martyrs. Upon returning to America I will share my impressions of this unforgettable pilgrimage and my new Russian friends. I am happy that a drop of our labor has poured into the monastic life of Solovki: our kids, headed by Fr Andrei, chopped wood, and the girls carried and stacked them. I will definitely come back again! 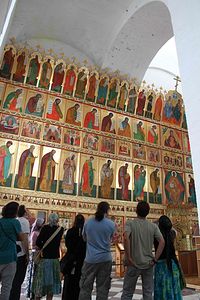 – I was stunned by the podvigi of the monks in Solovetsky Monastery—how those who lived in the monastery, its sketes and hermitages in ages past, and those who are there today. Without exaggeration, this is true podvig—to devote your whole life to serving God.

On this holy land we were able to find new friends from Russia: they have a summer camp for the students of St Tikhon Orthodox Humanitarian University. We exchanged our thoughts, experiences and plans for the future. We made discoveries together about the tragic history of Solovki in the 20th century, when the new militantly atheist state declared war on the Church and all the faithful. As we know, they would exile hierarchs of the Russian Orthodox Church, monks and priests, members of the White Army, to Solovki and tortured them to death: officers and soldiers, anyone who did not suit the new mortal rulers. But if in the 1920’s, the word “Solovki” was imbued with horror, now Solovki is a place of pilgrimage for many, many people from Russia and abroad.

I would very much like to participate in the reestablishment of Solovetsky Monastery. If I were a wealthy man, I would immediate donate a million dollars. But for now, I will at least make plans to make a return visit.

Sometimes I am asked: is it hard to be Orthodox in the West? Yes, sometimes it is, since you are surrounded mostly by irreligious people: on the other hand, it is a great responsibility to clearly and simply talk about our faith. I think that after this trip, I will be able to do this more easily. 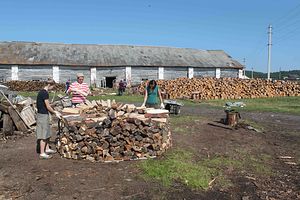 – I am an American, but at the present time I am working in a theatrical school in Hong Kong. At the invitation of Fr Andrei I flew from there to Moscow, where I joined the pilgrim group. Although I had to fly halfway around the world, I simply could not fail to take advantage of a unique opportunity to make a pilgrimage to the Solovetsky Islands in the White Sea, where over 500 years ago, SS Zosima, Savvaty and German founded the monastic life.

The holiness of these places is remarkable, and also how many Orthodox Christians suffered here for the truth. Little is known about this in the United States, and I will definitely tell my American friends about the podvigi of these people.

I was very impressed by the strict monastic life, which we previously only knew of through the movie “Ostrov” by Pavel Lungin (this movie has spread throughout the world, including the US) and the efforts by the Church today to restore the holy sites of Solovki. 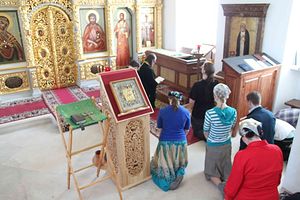 – My father is the rector of St Seraphim Orthodox church, and my mother is the choir director, so I had heard of the pious podvigi which brought glory to Solovetsky Monastery. For me this trip is very important; I saw with my own eyes that no godless powers, no matter how brutal, could overcome the Church. It was very interesting to live in this famous monastery, to participate in the archeological work, as they say, to pass through the history of this holy place myself.

Today it is difficult to preserve one’s Orthodox identity—not only for us in America, but in regard to the outside world. We see that here, in Russia, the Church is beginning to play a more important role in society, influence social processes, and this cannot but bring joy. We became convinced that Russian Orthodox youth holds an active and focused position. It is to our mutual benefit to develop our dialog and cooperation.


Photos by the ROCOR pilgrims

Translation by Russian Church Outside of Russia - Official Site Scenes from Solovki
In honor of these three saints of Solovki whom we celebrate today, we are revisiting selections from an amazing photo exhibit displayed in November of 2010 in the Christ the Savior Cathedral: "Solovki: Golgotha and Resurrection", dedicated to the twentieth anniversary of the renewal of monastic life at Solovki.