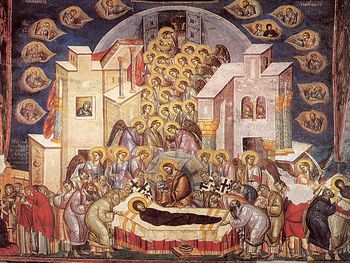 The Dormition fast comes down to us from the early days of Christianity.

We find a clear reference to the Dormition fast in a conversation of Leo the Great from around the year 450 A.D. “The Church fasts are situated in the year in such a way that a special abstinence is prescribed for each time. Thus, for spring there is the spring fast ]—the Forty Days[Great Lent; for summer there is the summer fast… [the Apostles’ fast]; for autumn there is the autumn fast, in the seventh month [Dormition fast]; for winter there is the winter fast [Nativity fast].”

St. Symeon of Thessalonica writes that, “The fast in August [Dormition fast] was established in honor of the Mother of God the Word; Who, foreknowing Her repose, ascetically labored and fasted for us as always, although She was holy and immaculate, and had no need for fasting. Thus, She especially prayed for us in preparation for being transported from this life to the future life, when Her blessed soul would be united through the Divine spirit with Her Son. Therefore, we also should fast and praise Her, emulating Her life, urging Her thereby to pray for us. Some, by the way, say that this fast was instituted on the occasion of two feasts—the Transfiguration and the Dormition. I also consider it necessary to remember these two feasts—one which gives us light, and the other which is merciful to us and intercedes for us.”

The Dormition fast is not as strict as the Great Fast, but it is stricter than the Apostle’s and Nativity fasts.

On Monday, Wednesdays and Fridays of the Dormition fast, the Church rubrics prescribe xerophagy, that is, the strictest fast of uncooked food (without oil); on Tuesdays and Thursdays, “with cooked food, but with no oil”; on Saturdays and Sundays wine and oil are allowed.

Until the feast of the Transfiguration of the Lord, when grapes and apples are blessed in the churches, the Church requires that we abstain from these fruits. According to the tradition of the holy fathers, “If one of the brethren should eat the grapes before the feast, then let him be forbidden for obedience’s sake to taste of the grapes during the entire month of August.”

On the feast of the Transfiguration of the Lord, the Church rubrics allow fish. After that day, on Mondays, Wednesdays, and Fridays, the fruits of the new harvest would always be included in the meals.

The spiritual fast is closely united with the bodily, just as our soul is united with the body, penetrates it, enlivens it, and makes one united whole with it, as the soul and body make one living human being. Therefore, in fasting bodily we must at the same time fast spiritually: “Brothers, in fasting bodily let us also fast spiritually, severing all union with unrighteousness,” the Holy Church enjoins us.

The main thing In fasting bodily is restraint from abundant, tasty and sweet foods; the main thing in fasting spiritually is restraint from passionate, sinful movements that indulge our sensual inclinations and vices. The former is renunciation of the more nourishing foods for fasting food, which is less nourishing; the latter is the renunciation of our favorite sins for exercise in the virtues which oppose them.

The essence of the fast is expressed in the following Church hymn: “If you fast from food, my soul, but are not purified of the passions, in vain do we comfort ourselves by not eating. For if the fast does not bring correction, then it will be hateful to God as false, and you will be like unto the evil demons, who never eat.”

The Great fast and the Dormition fast are particularly strict with regard to entertainment—in Imperial Russia even civil law forbade public masquerades and shows during these fasts.

The Dormition fast begins on the feast of the “Procession of the Wood of the Life-Giving Cross of the Lord.” 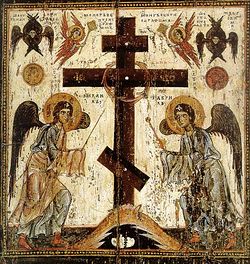 Icon of the Veneration of the Cross. Novgorod. (Preserved in the Tretyakov Gallery, Moscow.) In the Greek horologion of 1897, the origin of this feast is explained: “Because of the illnesses that occur very often during August, the custom was established in Constantinople of processing the Precious Wood of the Cross through the roads and streets to sanctify places and prevent disease. On the eve of the feast it was carried out of the royal treasury and placed upon the holy table of the Great Church (the Hagia Sophia, dedicated to the Holy Wisdom of God). From that day until the Dormition of the Most Pure Theotokos, lityas were served throughout the city, and the Wood of the Cross was then offered to the people for veneration. This was the procession of the Precious Cross.”

In the Russian Orthodox Church, this feast was linked with the remembrance of the Baptism of Russia in 988. The memory of the day of the Baptism of Russia was preserved in the Chronologies of the sixteenth century, which state that, “Grand Prince Vladimir of Kiev and All Rus was baptized on August 1.” In the Discussion of active rites of the Holy Catholic and Apostolic Church on the Dormition, written in 1627 at the request of Patriarch Philaret of Moscow and All Russia, the feast on August 1 is described: “During the procession on the day of the Precious Cross, there is a blessing of the waters for the enlightenment of the people, throughout the cities and villages.”

On this day, a feast was established of the All-Merciful Savior Christ God, and of the Most Pure Virgin, in honor of the victory of Grand Prince Andrei Bogolubsky over the Volga Bulgars, and of the Greek Emperor Michael over the Saracens.

According to Orthodox Church tradition, on this day the Cross is venerated (according to the rubrics of the Sunday of the Veneration of the Cross during Great Lent), and a lesser blessing of the waters is served. Together with the blessing of the waters, new honey is also blessed. (This is where the Russian folk name for the feast, “Savior of the honey,” comes from.)

Official site of the Moscow Patriarchate

John8/14/2020 6:45 pm
The Dormition Fast is observed the same as Great Lent: strict on weekdays, wine and oil on weekends, and fish on the Transfiguration.