Three Glinsk Elders to be Canonized 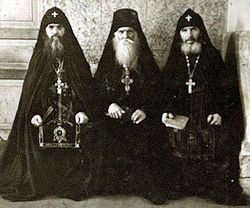 The festal Liturgy will be served in the court of the Church of the Nativity of the Mother of God in Glinsk Stravropegial Monastery.

Glinsk Monastery was founded in the sixteenth century on the border of the Muscovite and Lithuanian princedoms. The monastery is located on what was before the communist revolution Kursk Province, Russia, but is now part of the Ukraine. The monastery began its formation with a miracle—an icon of the Nativity of the Mother of God appeared on a tall pine tree. A spring gushed forth from under the roots of this tree soon afterward, and many spiritual and bodily ailments were healed by its waters.

For several centuries, Glinsk monastery united the prayerful solitude of its sketes with the spiritual and physical feeding of all who came to visit. The monastery gave birth to a host of elders, thirteen of whom were canonized in 2008. These were mostly ascetics who labored in the monastery, and were glorified by miracles during the nineteenth and twentieth centuries.

These three Glinsk elders occupy a special place in Orthodox monasticism of the latter times. They experienced the closing of the monastery, persecutions, exile, and imprisonment. They were known for their deep humility and boundless love for people, who came to them for counsel from all over the former Soviet Union. Even today, there are still those who can testify to their strength of prayer and gift of clairvoyance. The upcoming canonization is a significant event for the monastery and for those places where these elders lived—Abhazia, Georgia, and the Ukraine. The relics of Fr. Seraphim (Romantsov) were brought from Abkhazi to Glinsk Hermitage last summer at the blessing of His Holiness Patriarch Kirill of Moscow and All Russia.

The monastery is preparing to receive potentially thousands of pilgrims for the event, according to the Glinsk tradition of love and hospitality. The monastery's address is: