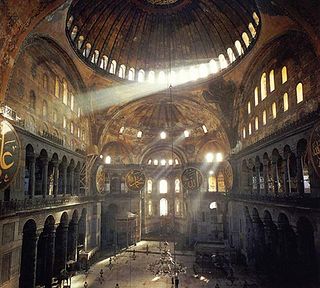 On Friday, September 18, a group of about 250 Greek Orthodox Christians cancelled their plans to hold Divine Liturgy and the Hagia Sophia in Istanbul after statements by Turkish officials that the planned services would not be allowed, reports Today's Zaman. Turkish law forbids any religious service at the basilica, which served as the cathedral of Constantinople until its conquest by the Ottoman Empire in 1453, at which time it was turned into a mosque. It has been a museum since 1935. Officials cited that a service "could spark provocations that could in turn harm the government's efforts to improve religious freedoms." A Turkish Foreign Ministry official earlier said Ankara could stop the group from entering Turkey if they pose a security threat.

But a spokesperson for Stefan Füle, the EU commissioner for enlargement, appeared to agree with Turkish officials, saying on Friday that religious freedom could be restricted for the sake of public safety. “The European Convention for the Protection of Human Rights and Fundamental Freedoms grants the right to freedom of thought, conscience and religion to all, and adds that such freedom can be subject to limitations necessary in a democratic society, such as public safety or protection of public order,” Angela Filote said in a statement. President of the International Congregation of Agia Sophia Issues Statement