The Spiritual Exaltation of the Cross

From: Letters on the Spiritual Life 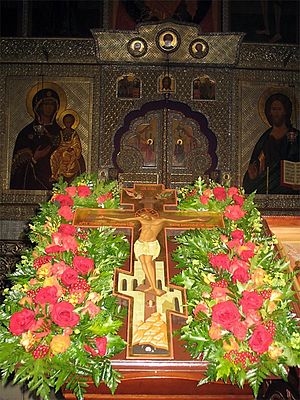 The Exaltation of the Lord’s Cross has arrived. Then the Cross was erected on a high place, so that the people could see it and render honor to it. Now, the cross is raised in the churches and monasteries. But this is all external. There is a spiritual exaltation of the cross in the heart. It happens when one firmly resolves to crucify himself, or to mortify his passions—something so essential in Christians that, according to the Apostle, they only are Christ’s who have crucified their flesh with its passions and lusts (cf. Gal. 5:24). Having raised this cross in themselves, Christians hold it exalted all their lives. Let every Christian soul ask himself if this is how it is, and let him hearken to the answer that his conscience gives him in his heart. Oh, may we not hear, “You only please your flesh in the passions; your cross is not exalted—it is thrown into the pit of the passions, and is rotting there in negligence and contempt!”

When the Lord was taken down from the Cross, the Cross remained on Golgotha, and then it was thrown into the pit that was in that place, where this instrument of execution was usually thrown, together with other refuse. Soon Jerusalem was razed and all of its edifices were leveled to the ground. The pit containing the Cross of Christ was also filled over. When the pagans rebuilt the city (the Jews were forbidden to come near the place where it was), it happened that on the place where the Cross of Christ was hidden, they placed an idol of Venus, the pagan Goddess of fornication and all manner of lusts. This is what the enemy suggested to them. This is how it is with our inner cross. When the enemy destroys the spiritual order in the soul, this is our mental Jerusalem, and then the spiritual cross is thrown down from the Golgotha of the heart and is covered over with the garbage of the affections and lusts. Lustful self-pleasure then rises like a tower over all our inner peace, and everything in us bows down to it and fulfills its commands until grace shines upon us, inspiring us to cast down the idol and lift up the cross of self-crucifixion.