A book on Orthodoxy in China released 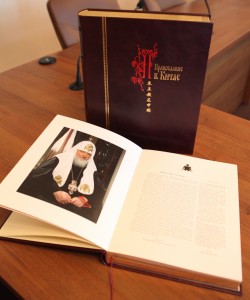 A unique book entitled ‘Orthodoxy in China’ has been published (in Russian). It describes the birth and development of the Orthodox culture in the Celestial Empire. During his official visit to China on 27 September 2010, Russian President Dmitry Medvedev presented the Chairman Hu Jintao with a copy of this book.

The book is an academic edition published in Russian and Chinese with rich illustrations. It was prepared for print and published with the blessing of the DECR chairman, Metropolitan Hilarion of Volokolamsk, and through the efforts of his staff members, as well as the Russian Academy of Science’s Institute of the Far East and the Russian-Chinese Business Council.

‘Russia and China are countries with rich spiritual traditions. At present our countries follow with confidence a path of developing strategic partnership. An important support on this path is provided by the knowledge of our common history, including the history of Orthodoxy in China’, Patriarch Kirill of Moscow and All Russian noted in his address to the readers of the book.

The volume is published to coincide with the 325th anniversary of Orthodoxy in China. To mark this anniversary, Orthodox divine services have been resumed in several churches in Beijing, Harbin and Shanghai – a result of long-standing efforts to find new ways in which the Russian Orthodox Church could help normalize the situation of the Chinese Autonomous Orthodox Church and to broaden cooperation with religious, public, academic and governmental bodies in China.

Orthodoxy came to China in 1685 when a Russian priest by name of Maxim Leontyev came to Beijng together with Cossack captives. In 1712, a Russian Orthodox Mission was established in China, which acted for a long time as Russia’s diplomatic representation. The linguistic and cultural studies undertaken by the Mission made a considerable contribution to the development of sinology in Russia and the world.

The Mission’s principal concern however was the preaching of the Gospel. By the 20th century, a numerous Chinese flock had formed in China with their own national clergy and later episcopate. The Chinese Autonomous Orthodox Church was a fruit of spiritual work of Russian missionaries and Russian re-settlers in China, but the development of this young church body was tragically interrupted by the Cultural Revolution.

Nevertheless the Orthodox Church in China has survived to this day. Today there are about 15 thousand Orthodox believers there. Pascha is celebrated in China

Pascha is celebrated in China
On Paschal night, the Revd. Dimitry Fedorin, dean of the first church district of Vladivostok and a cleric of the Cathedral of the Intercession took part in the procession with the cross held by the Chinese Orthodox community in Harbin, People’s Republic of China.
×