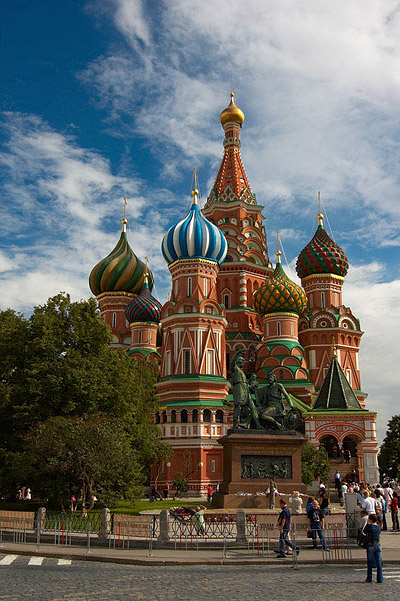 The famous St. Basil's Cathedral, orgininally dedicated to the Protection of the Mother of God.

The Protection of the Holy Virgin is one of the most popular Orthodox holidays in Russia. Thousands of cathedrals were built in Russia in honor of this holiday.

On October 14th, the Russian Church celebrates an event that occurred on that very day in 910 during the siege of the capital of Byzantium, Constantinople. The city was attacked by the pagans and the situation was desperate. The citizens gathered in the Blachernae church and prayed to the Holy Mother. After the Virgin's robe, brought to Byzantine from Palestine, was cast into the sea, a storm rose up, driving the pagan ships away.

Russians learned of this event from the life story of  the blessed fool-for-Christ Andrew, who saw the Queen of Heaven and Earth appear in the Blachernae church, praying for the world and all the people, and blessing the faithful with Her most holy omophorion.

"In Russia, believers have been marking the holiday since the 12th century," Father Georgy Zevershinsky, a representative of the Department of Foreign Relations for the Russian Orthodox Church said. "It is the agency of Providence that the holiday occurs in autumn. It is getting cold and windy and man strongly feels a need for protection, guidance and special prayer, I would say.

The Holy Virgin protects not only from external enemies. She does not let any evil intentions and impure thoughts surface. Prayers on this day are prayers for peace, accord, love and about preserving Christian values in physical and spiritual life," Father Georgy said.

Evidence of the holiday's popularity is the great number of cathedrals built in its honor. The first of them is the Church of the Intercession of the Holy Virgin on the Nerl River in the Vladimir region. It was build seven centuries ago by Prince Andrei Bogolyubsky.

In Old Russia, girls went to church on this very day to pray to God to give them good husbands. According to an old belief, the more snow there is on this day, the more weddings there will be in the coming year. Moscow has already seen its first snow this year, which means that next year there will be more happy families.

The Voice of Russia Rejoice, O Our Joy! Sermon on the Feast of the Protection of the Mother of God
Archimandrite John (Krestiankin)
But during this present, difficult time, when the earth has grown old, is burdened by faithlessness, lawlessness, and ignorance of the knowledge of God’s commandments, has our Fervent Intercessor turned away from us in her zeal for the glory of her Son and God? No, my dears, this could not be. Needy children are dearer to a mother.

The Feast of the Protection of the Mother of God
From The Prologue From Ochrid by Bishop Nikolai Velimirovich
The Church has always glorified the Most Holy Mother of God as the Protectress and Defender of the Christian people, entreating, by her intercession, God's loving-kindness towards us sinners. The Mother of God's aid has been clearly shown times without number, both to individuals and to peoples, both in peace and in war, both in monastic deserts and in crowded cities.
Comments

ADHS7/20/2015 3:35 pm
The Mother of Jesus keep all the world alive.
Thank you for giving us hope from God Russia.
A Greek
Alexandros (seegreek2.blogspot.com)