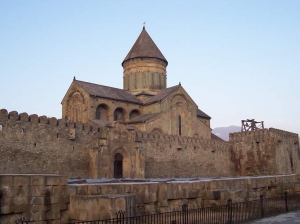 
The festivities are particularly impressive due to the 1000th anniversary of the Cathedral. Several other religious holidays are marked according to the religious calendar today. The faithful are marking the day of King Mirian and Queen Nana, the day of Saint Sidonia, who died with the shroud of Jesus and the Day of Jesus` Shroud.

Along with religious rites, the streets of Mtskheta is hosting various events, exhibitions of folk crafts and paintings, performances and concerts by various ensembles from regions of Georgia, circus and sport competitions. Burial of brother of Catholicos-Patriarch Ilia II takes place in Mtskheta
The elder brother of the catholicos-patriarch reposed at his home in Mtskheta on September 30. Recently he was often ailing. Metropolitan Hilarion takes part in millennium celebrations in Mtskheta
On October 14, 2010, the Day of the Holy Robe and the Life-Giving Pillar (Svetitsovloba), Orthodox Georgia celebrated the millennium of its main cathedral ‘Svetitshoveli’ in the old Georgian capital city of Mtskheta. At the same time, the Church celebrated the 1700th anniversary of the first church built in the place where the Robe of the Lord was buried. Holy Martyr Evstati of Mtskheta (†589)
Archpriest Zakaria Machitadze
Saint Evstati, a Persian by descent, was a fire-worshipper named Gvirobandak prior to his baptism into the Christian Faith. When he arrived in Georgia and settled in Mtskheta, he was deeply drawn to the morals and traditions of the Georgian people, and he resolved to convert to Christianity.
×