On November 8, 2010, five Anglican bishops resigned from their positions and entered the Roman Catholic Church. This change had been brewing ever since the Anglican Church began to make unprecedented changes, most sharply the the ordination of women and homosexuals into the priesthood and even bishoprics. Traditionalists, the departing bishops expressed their regret, but felt they had to do it. Their future is uncertain, as is the future of those traditionally minded Anglicans who remain in their own Church. In view of these historical changes, Pravoslavie.ru/OrthoChristian.com recommends a work by Fr. Andrew Phillips, an Orthodox priest who serves in St John's Orthodox Church, Colchester, England. His booklet provides an insightful overview of Christian history in England; it sheds light upon the true tradition of Anglo-Saxon Christianity, and how the English could regain it. The booklet can be read in electronic form on his website:

‘The Kingdom of the (Old) English is the Kingdom of God,
and God has been pleased to make provision for the future.’

The Vision of St Peter to Bishop Berhtwald 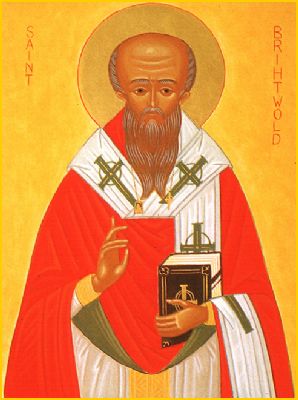 St. Brihtwold (Berhtwald), Bishop of Ramsbury, Wiltshire.
The ecclesiastical history of Pre-Conquest England, and indeed of the British Isles as a whole, is often presented as the history of two great centres, Rome and Canterbury. It is, however, our view that another great ecclesiastical centre deserves to be taken into consideration in the history of the Old English Church, both indirectly at its foundation and directly at its end. This centre, whose importance has been greatly neglected in the writing of Western history for several centuries, is Constantinople, the New Rome of St Constantine the Great.

Indeed, it is our belief that if we are only now awakening to the importance of this centre and all that it represents, then it is also because we are only now awakening to the significance of the first centuries of Roman Christianity among the Old English, awakening to the historical meaning of the Conversion of Anglo-Saxon England by the Apostles. For, as it would seem, there are deep but clear currents linking the Apostles of our land from Old Rome, and the City of Constantinople, New Rome. At the end of the Old English period, these currents appear to be all the more evident, as we shall see. This is not to say that we in any way deny the pre-eminent role of the Papacy in the Conversion of England, rather we wish to underline it but also to make a distinction. This distinction is between the Papacy of St Gregory the Great, and that of Hildebrand, Gregory VII, in the eleventh century. The Rome of St Gregory the Great was an integral and essential part of a Christian Commonwealth, which since the mideleventh century has been no more. Since then, moreover, the Roman Patriarchate has itself fallen into several parts, one of them being Canterbury.

In an age where unity is so much sought after, it is thus our task to present to the reader some little part of the unity of that Christian Commonwealth, as it can be seen in the history of Anglo-Saxon England, most particularly at its beginning and at its ending. This we do with the wish that one day this former Commonwealth will be spiritually drawn together once more. Moreover, it is our belief that this will occur when the Western world itself is rebalanced by its full participation in the spiritual heritage of Constantinople, the Orthodox Church. In so doing it will rediscover its own spiritual roots, from which it has wandered so far. This is not wishful thinking, for one of the greatest saints of the Old English Church, St Edward the Martyr, is today venerated in a monastic brotherhood of the Orthodox Church at Brookwood in Surrey. There his relics, miraculously recovered, are enshrined and the faithful come to venerate them and his holy icon. He, we believe, is the first-fruit of the restoration of England’s spiritual heritage. May Thy Will be done O Lord. A Family of Saints: Sts. Kentigerna, Fillan and Comgan of Scotland
Dmitry Lapa
Amazingly, Celtic holiness is unique for its “families of saints”, which were sometimes very large and included representatives of several generations. There was the spiritual relation between saints; but besides this, there were many saints who were relatives by blood: holy parents and children and grandchildren, holy brothers and sisters, cousins, uncles, aunts, nephews and nieces. Fr. Antonio Arganda11/9/2015 7:24 am
The last Orthodox Catholic king of England was Harold Godwinson who died at the Battle of Hastings. His children and grandchildren migrated to Russia and some became saints of the Russian Church.

Constantine Georgiades11/4/2012 5:24 pm
Once man calls upon the 'Mythical' mother for protection, he immediately becomes paralyzed from the neck downwards!

The above statement excludes the Theotokos, who gave birth to God the Word, O Light-bearing tabernacle.

I use much of Father Phillips excellent written work on my educational web site: www.oldenglishchurch.org.uk, for which I am extremely grateful.

Michael11/11/2010 3:25 pm
Thank you so much for giving this and many other materials of priest Andrew Phillips on your website! I am always delighted to read his accounts of early Church on British Isles and hope that you are going to publish his materials on this theme again and again.
Servant of God Michael

Irina Koreneva11/10/2010 4:18 pm
Thank you for publishing articles of this author in Russian about early Saints of Britain and ones of other authors on this subject too! I would much appreciate if you publish lives of these Saints of the early Western Church (especially British isles and Ireland) more often!
May God bless you! With love in Christ,
Irina

Eugenia11/10/2010 3:04 pm
Dear editors of pravoslavie.ru, I always read wonderful articles of Fr Andrew Phillips about English saints with great interest and joy as well as many of my friends do. Please, can you regularly publish the articles on the same theme (lives of UK saints) futher? It is one of the most interesting sections on your website which I consider to be one of the best existing Orthodox sites.
Eugenia