And Jesus asked him, saying, What is thy name? And he said, Legion:
because many devils were entered into him.
And they besought him that he would not command them to go out into the deep.
And there was there an herd of many swine feeding on the mountain:
and they besought him that he would suffer them to enter into them. And he suffered them.
Then went the devils out of the man, and entered into the swine:
and the herd ran violently down a steep place into the lake, and were choked.

I must confess that I met the idea of preaching upon today’s Gospel with a certain degree of trepidation. For several reasons, we modern people find ourselves particularly disconcerted by accounts of demonic possession and exorcism.

First of all, in recent times there have been disturbing accounts of so called exorcisms which have been nothing other than mechanisms of manipulation, bullying and downright abuse.

Secondly, the mass media has produced a whole genre of entertainments which seems to consistently glamorise supernatural evil whilst depicting all that is good and wholesome as being rather boring and dull.

There is, however, a third: – and I believe a more profound reason for the unease which I (and I suspect you) feel.

Like it or not, we are all modern people: – that is to say people of the post-enlightenment era: – and as such we live with, an often unspoken assumption that everything is perfectly rational. In other words that it should always be possible, at least in principle, to explain things, to predict events and, in the light of all of this, to remain in control of our lives.

Today’s gospel confronts us with the irrational in a dark and menacing form. The demons’ clear understanding and confession that Jesus is the Son of God prevents us from conveniently dismissing the episode in the modern categories of mental illness. We are, rather, confronted by the uncomfortable truth that, what we perceive to be the terra firma of rationality, may in reality be a thin crust overlying the unknown and perhaps the unknowable.

It is disturbing because it means that that the security that we all work so hard to achieve in this life is, in fact, a delusion. A change in the law: – and a pension fund is raided: – A few months of hyperinflation: – and a lifetimes savings can buy a bag of cherries. A stroke: – and years of formal education can be erased. 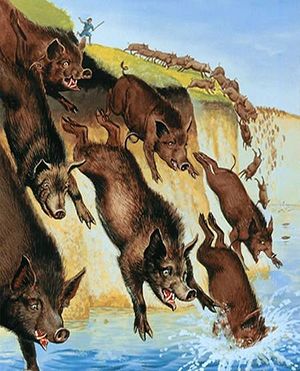 A loss of temper and a cherished relationship can be shattered.

The world encourages us at every turn to be ‘self reliant’.

Yet, if we rely upon ourselves, we become more vulnerable than we can possibly imagine.

When we acknowledge Jesus Christ to be the Lord of all Creation: – it is, perhaps all too easy for us to limit the scope of ‘Creation’ to what is familiar to us.

Even if we include the most distant stars and galaxies together with the most minute particles of matter: – we still limit our understanding to those things which are accessible to our minds.

In doing so He reveals Himself to be the only ground for our well being, our safety, indeed our salvation.
After hearing how the Lord had delivered the man from the legion of daemons:- The locals were frightened and wanted Jesus to go away.

They obviously weren’t frightened because the demons were gone.

Perhaps, they weren’t so dissimilar to us moderns after all!

Perhaps, in this mighty act of the Lord, they had caught a glimpse of the true bedrock of reality and saw that it was not the basis upon which they had chosen to build their lives:- Disconcerting indeed!


May Christ our God:- the Lord and creator of all things, both seen and unseen, be to us the sure foundation. Vrubel: The terrible price of obsession with demons
Mikhail Vrubel (1856-1910), the author of such masterpieces as “Demon and Swan Princess,” is probably one of the most tragic figures among famous Russian painters.
Comments
×