The Nature of Angels — Their Hierarchy and Ministrations 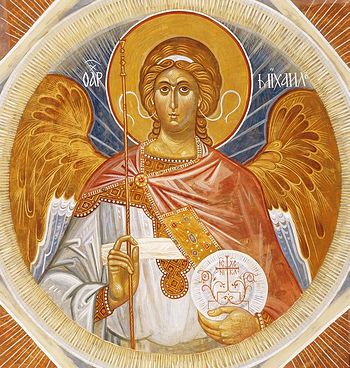 Fresco of Archangel Michael
According to the Holy Scriptures, the angels, human beings, and all nature were created by God. With the words, "In the beginning God created Heaven and earth" (Gen. 1:1), we have the first indication that God created the spiritual world. Here, in contrast to earth, a substantial world, this world of spirits is called Heaven. The angels were already present during the creation of the starry skies, which is evidenced by the words of God spoken to Job, "When the stars were created, all My angels sang praises to Me" (Job 38:7).

On the creation of the angels, Saint Gregory the Theologian expresses the following thoughts: "Since for the goodness of God it was not sufficient to be occupied only with the contemplation of Himself, but it was needful that good should extend further and further, so that the number of those who have received grace might be as many as possible (because this is characteristic of the highest Goodness) — therefore, God devised first of all the angelic heavenly powers; and the thought became deed, which was fulfilled by the Word, and perfected by the Spirit … And inasmuch as the first creatures were pleasing to Him, He devised another world, material and visible, the orderly composition of heaven and earth, and that which is between them."

Angel in Greek means messenger. This word denotes mainly their relationship to man. They, as our elder brothers, reveal to us the will of God and assist us in reaching salvation. Man, from the beginning of his state in paradise, knew of the existence of the angels. This fact is reflected in many ancient religions.

It is difficult for us to comprehend the life of the angels and the world in which they live because they are so different from us. It is known that the angels serve God, carry out His will, and glorify Him. Belonging to the spiritual world, they are usually invisible to us. "When angels, through the will of God, appear to those who are worthy, then they appear not as they are themselves, but in a transformed state, in one that is visible" — explains the blessed John Damascene. In the well-known book of Tobit (Old Testament), the angel who was accompanying Tobit and his son says of himself:"All these days I was visible to you, but I did not eat or drink, and only by your eyes was this imagined" (Tobit 12:19). "Actually," according to John Damascene, "angels are called spiritual and incorporeal only in comparison with us. For in comparison with God all proves to be gross and material. For only the Divinity is truly immaterial and incorporeal."

Angels surpass man in all spiritual strength. However, even they, as created beings, bear in themselves the seal of limitation. Being fleshless, they are less dependent than men on space and time. However, only God is omnipotent and omniscient. The Holy Scriptures represent angels either descending from heaven to earth or ascending back to heaven. Angels are created immortal, as is witnessed by the Scriptures, teaching that they cannot die (Luke 20:36). Nevertheless, their immortality is not a property of their nature, nor is it unconditional, but, just as the immortality of our soul, it depends wholly upon God's will and mercy.

Angels, as fleshless spirits, are capable of inward self-development to the highest degree. Their intellect is higher than that of man. By their might and power, as the Apostle Peter explains, they surpass all earthly authorities and governments (2 Peter 2:11). Nevertheless, even their exalted attributes have their limits. Scriptures indicate that they do not know the depth of the Essence of God, which is known only to the Spirit of God. (1 Corinthians 2:11 They do not know the future, which is also known only to God (Mark 13:32). Likewise, they do not wholly comprehend the mysteries of redemption into which they wish to penetrate (1 Peter 1:12). They even do not know all of man's thoughts (3 Kings 8:39 [Note: 3 Kings in the Slavonic Bible = 1 Kings KJV]). Finally, they cannot on their own perform miracles without the will of God.

The world of the angels is represented in the Sacred Scriptures as being extraordinarily vast. When the prophet Daniel saw God the Father in the form of the "Ancient of Days," he also saw that "A thousand thousands ministered to Him; and ten thousand times ten thousand stood before Him" (Daniel 7:10). During the birth of Jesus in Bethlehem "a multitude of the heavenly host" extolled His coming to earth (Luke 2:13).

Saint Cyril of Jerusalem says the following: "Imagine how numerous is the Roman population; imagine how numerous are other barbarian tribes existing today, and how many of them have died during one hundred years; imagine how many have been buried during a thousand years; imagine all the people, beginning with Adam, to the present day; there is a great multitude of them. But it is yet small in comparison with the angels, of which there are many more! They are the ninety and nine sheep of the parable, but mankind is only one sheep. For according to the extent of universal space, we must reckon the number of its inhabitants. The whole earth inhabited by us is like a point in the midst of heaven and yet contains so great a multitude; what a multitude must the heaven which encircles it contain! And must not the heaven of heavens contain unimaginable numbers? If it is written that `a thousand thousands ministered to Him; and ten thousand times ten thousand stood before Him,' it is only because the prophet could not express a greater number."

In view of such a multitude of angels, it is natural to suppose that in the world of angels, just as in the material world, there are various degrees of perfection and, therefore, various stages or hierarchical degrees of the heavenly powers. Thus, the word of God calls some Angels and some Archangels (1 Thess. 4:16; Jude verse 9).

The Orthodox Church, guided by the views of the ancient writers of the Church and Church Fathers, divides the world of the angels into nine choirs or ranks, and these nine into three hierarchies, each hierarchy having three ranks. The first hierarchy consists of those spirits who are closest to God, namely, the Thrones, Cherubim and Seraphim. Within the second, the middle hierarchy, are the Authorities, Dominions and Powers. In the third, which is closer to us, are the Angels, Archangels and Principalities. Thus, the existence of the Angels and Archangels is witnessed by almost every page in the Holy Scriptures. The books of the prophets mention the Cherubim and Seraphim. Cherubim means to be near; hence it means the near ones; Seraphim means fiery, or filled with fire. The names of the other angelic ranks are mentioned by the Apostle Paul in his epistle to the Ephesians, saying that Christ is in the heavens "far above any Principality, and Authority, and Power, and Dominion" (Ephesians 1:21).

Besides these angelic ranks, Saint Paul teaches in his epistles to the Colossians that the Son of God created everything visible and invisible,"Thrones, Dominions, or Principalities, or Powers" (Colossians 1:16). Consequently, when we join the Thrones to those four about which the Apostle speaks to the Ephesians, that is, the Principalities, Authorities, Powers and Dominions, there are five ranks; and when to these we add Angels, Archangels, Cherubim and Seraphim, then there are nine angelic ranks.

In addition, some Church Fathers expressed the opinion that dividing the angels into nine choirs touched only upon those names that are revealed by the word of God but in no way encompasses other names and choirs of angels that have not been as yet revealed to us. For example, the Apostle John the Theologian mentions in the book of Revelation mysterious creatures and the seven spirits by the throne of God: "Grace be to you and peace from Him who is and who was and who is coming, and from the seven spirits who are before His throne" (Apocalypse 1:4). The Apostle Paul in his epistle to the Ephesians writes that Christ resides in heaven far above the enumerated angels and "every name that is named, not only in this age but also in that which is to come" (1:21). Thus he hints that in Heaven there are other spiritual creatures whose names are yet not revealed to mankind.

In the Holy Scriptures, some angels are called by their own names. For example, the prophet Daniel, the Apostle Jude, and the book of Revelation mention the archangel Michael (Joshua 5:13; Daniel 10:13 and 12:1; Jude verse 9; Revelation 12:7-8). The name Michael in Hebrew means Who is like God? In the Scriptures he is mentioned as the army of God and is depicted as the main fighter against the devil and his servants. Usually he is painted with a flaming sword in hand. The name Gabriel means strength of God. Both the prophet Daniel and the evangelist Luke mention Gabriel (Daniel 8:16, 9:21; Luke 1:19-26). In the Scriptures he is represented as the messenger of God's mysteries. In icons he is painted with a lily in his hand. The Scriptures mention by name three more angels: Raphael — Assistance of God, Uriel — Flame of God, and Salathiel — Prayer book to God (Tobit 3:16 and 12:12-15; 3 Esdras 4:1 and 5:20; 3 Esdras 5:16 [Note: 3 Esdras in the Slavonic Bible = 2 Esdras KJV, or 4 Esdras in Vulgate Appendix]).

What are the tasks of the beings of the spiritual world? Evidently they are designated by God to be the most perfect reflections of His greatness and glory, with inseparable participation in His blessedness. If of the visible heavens it is said, "the heavens proclaim the glory of God," then all the more is this the aim of the spiritual heavens. The prophet Isaiah was honored to see "the Lord sitting on the high extolled throne, the hems of His vestments filling the whole temple. Surrounding Him were the Seraphim, each having six wings; with two they covered His face, with two they covered His feet, and they flew with the other two. And they called to each other and said: Holy, Holy, Holy, the Lord Sabaoth! The whole world is filled with His Glory'" (Isaiah 6:1-4; Ezekiel ch. 10).