THE WAY Introductory Course to the Orthodox Faith Published in the U.K. 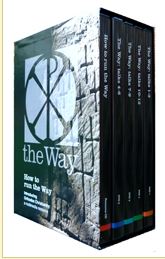 The Introductory Course to the Orthodox Faith, THE WAY, has been launched as a DVD & CD boxset on 7 October 2010, at St Botolph’s Church without Bishopsgate, London, in the presence of Archbishop Elisey of Sourozh, representing the Pan-Orthodox Assembly of Bishops with Churches in the British Isles.

THE WAY is the outreach programme of the Institute for Orthodox Christian Studies. It is a course of 12 sessions, run usually over 12 weeks, and consists of: a meal together, a talk on a central aspect of Christian belief, free discussion in small groups and a ‘question and answer’ session, where members of each group put questions to a panel. The course aims to present the basics of Orthodox Christian faith in an atmosphere of friendship, free exchange and trust, where no question or opinion is treated as unworthy of attention.

THE WAY course has been presented with great success in London, twice at the Greek Orthodox Cathedral (in 2004 and 2007) and at the Russian Orthodox Cathedral in 2005. Two of the team offered the course overseas in the first part of 2005, at the Greek Orthodox Church of the Holy Resurrection, Singapore, and at the Antiochian Orthodox Cathedral of St George, Sydney, Australia. The course has been offered in Cambridge and in North London by the original team, by local presenters in Manchester, and it has been experimentally tested by parishes as far afield as Boulder, Colorado, USA and Melbourne, Australia.

World Vision has made available funds for the publication of the course as a boxed set. The aim of the set is to serve as a model for local presenters of how to run the course in their parishes. The published course offers the texts of all talks, all necessary materials, instructions and advice on a range of topics, from publicity and brochures to catering or the handling of the ‘Q & A’ sessions. THE WAY derives its authority to teach from the blessing given to the Institute for Orthodox Christian Studies by those Orthodox bishops with responsibilities in Great Britain. All the initial talks were vetted by Metropolitan Kallistos of Diokleia and ongoing revisions and expansions have been scrutinized by him.

The general public may order the box set from Gazelle, http://www.gazellebookservices.co.uk, or from Amazon UK. The Institute is currently organizing to market in the Americas and in Australasia. The recommended retail price in the United Kingdom is Ј23.50 (which includes VAT).

More information on THE WAY course can be found on the IOCS website at http://www.iocs.cam.ac.uk/courses/courses_way.html. Catechetical website opened by the Ukranian Orthodox Church
On December 9, 2010, at the blessing of Bishop Ilary, Vicar of the Kiev Metropolia and head of the Synodal department of religious education and catechism of the Ukraninian Orthodox Church, an official website was became active, reports Patriarchia.ru.