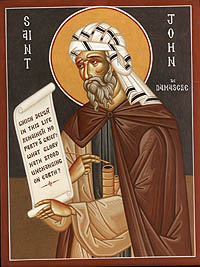 St John has sometimes been described as an unoriginal thinker, a mere compiler of the existing tradition. It was not St. John’s intent to come up with ideas unique to himself. Toward the beginning of his work, The Fountain Head of Knowledge, he writes, “I will say nothing of my own.” While that may not be acceptable or rewarded in the scholarship and academia of today, it reveals St. John’s faithfulness to the tradition. Andrew Louth, quoting Zissimos Lorenzatos, suggests that St. John can be better understood when we remember that “originality means to remain faithful to the originals, to the eternal prototypes.”

The exact dates of St. John’s birth and death are difficult to determine. It seems, however, that Saint John was born in Damascus to a Christian family in the mid to late seventh century and died in the latter part of the eight century. The Prologue of Ohrid says this of the Damascene:

John was first the chief minister to Caliph Abdul-Malik and later a monk in the Monastery of St. Sava the Sanctified. Because of his ardent defense of the veneration of icons during the reign of the iconoclastic Emperor Leo the Isaurian, John was maligned by the emperor to the Caliph, who cut off his right hand. John fell down in prayer before the icon of the Most-holy Theotokos, and his hand was rejoined and miraculously healed. Seeing this miracle the Caliph repented, but John no longer desired to remain with him as a nobleman. Instead, he withdrew to a monastery, where, from the beginning, he was a model to the monks in humility, obedience and all the prescribed rules of monastic asceticism.

The writings of St. John of Damascus can be read here. See also the Icon of our Lady With Three Hands.

St. John was a defender of the holy images. He understood that God works with, in, and through the material:

I do not venerate matter, I venerate the fashioner of matter, who became matter for my sake and accepted to dwell in matter and through matter worked my salvation, and I will not cease from reverencing matter, through which my salvation was worked.

He also challenges us to consider our relationship to matter and what it says about our faith:

Show me the icons that you venerate, that I may be able to understand your faith.

On the Holy Trinity

St. John’s understanding of the Blessed Trinity is in the twofold context of the mysterious nature of God and the limitations on human thinking or speaking of God.

There is nothing created, nothing of the first and second order, nothing lord and servant;
but there is unity and trinity
- there was, there is, and there shall be forever -
which is perceived and adored by faith -
by faith, not by inquiry, nor by searching out, nor by visible manifestation;
for the more He is sought out, the more He is unknown, and the more He is investigated, the more He is hidden.

And so, let the faithful adore God with a mind that is not overcurious. And believe that He is God in three hypostases, although the manner in which He is so is beyond manner, for God is incomprehensible. Do not ask how the Trinity is Trinity, for the Trinity is inscrutable.

But, if you are curious about God, first tell me of yourself and the things that pertain to you. How does your soul have existence? How is your mind set in motion? How do you produce your mental concepts? How is it that you are both mortal and immortal? But, if you are ignorant of these things which are within you, then why do you not shudder at the thought of investigating the sublime things of heaven?

Think of the Father as a spring of life begetting the Son like a river and the Holy Ghost like a sea, for the spring and the river and sea are all one nature.

Think of the Father as a root, and of the Son as a branch, and the Spirit as a fruit, for the substance in these three is one.

The Father is a sun with the Son as rays and the Holy Ghost as heat.

Be persuaded, moreover, that the incarnate dispensation of the Son of God was begotten ineffably without seed of the blessed Virgin, believing Him to be without confusion and without change both God and man, who for your sake worked all the dispensation. And to Him by good works give worship and adoration, and venerate and revere the most holy Mother of God and ever-virgin Mary as true Mother of God, and all the saints as His attendants.

Doing thus, you will be a right worshiper of the holy and undivided Trinity, Father and Son and Holy Ghost, of the one Godhead, to whom be glory and honor and adoration forever and ever. Amen

Vespers Prayer on the Feast of St. John of Damascus

What shall I call you, divine sweetly-speaking John: most radiant star, one whose sight is illumined by the lighting flash of the Trinity? You entered into the dark cloud of the Spirit; you were initiated into the ineffable mysteries of the Divine; like Moses you made things clear in the beautiful language of the Muses. Intercede that our soul may be saved.