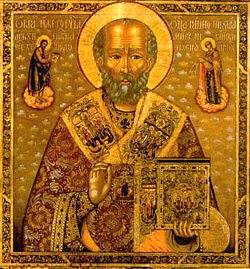 St. Nicholas the Wonder Worker, icon, 1713.
The question, "Is there a Santa Claus?" has led by association to the question, "Was there a St. Nicholas?" among secular historians. The issue seems to revive every December before Christmas, although everyone knows that St. Nicholas's feast day does not fall on Christmas, and he is only associated with the Nativity of Christ by the proximity of his own feast day. Well, and because he always gave people gifts.

Holy Hierarch Nicholas of Myra and Lycia is commemorated by the Church on December 6/19. Anyone who has ever prayed to St. Nicholas for help knows beyond a shadow of a doubt that he not only did exist, but still does exist, for our God is a God of the living (cf. Mt. 22:32).

Archimandrite Alipy (Voronov +1975) was abbot of the Pkov Caves Monastery, located in Russia near the Estonian border, from 1959–1975. The parishioners of the Monastery remember Archimandrite Alipy's wise reply to an article in Pechorskaya Pravda stating that St. Nicholas never existed. The Father Superior of the monastery gave a sermon on the subject:

One time in the Holy Trinity-St. Sergius Lavra, after doing some restoration work, I met and talked with one naval commander. Here is what he told me: 'I don't know if there is a God, but I know for certain that there is a St. Nicholas.' Then he told me this story: During the war, our ship was hit in the Black Sea, and it began to sink. We saw that the situation was bad. Nevertheless, atheistic fear wouldn't allow us to pray. Suddenly, one of our sailors proposed that we pray to St. Nicholas, the patron saint of sailors. Everyone agreed; we all kneeled and asked for his help, in whatever way we were able. Then, our ship just straightened up and started sailing, as if nothing had happened. It took us—with a hole in its side—straight to the shore. It's amazing to say that I did not even have time to give a command before the entire crew had run to the church to place a candle to St. Nicholas.

That's what the commander told me—that's no Eusebius of Samosata for you.[1]

Fr. Dorotheos is the abbot of the St. Nicholas Monastery on the Island of Andros, Greece. Below are some incidents he related that also leave no doubt about the existence of St. Nicholas.[2] 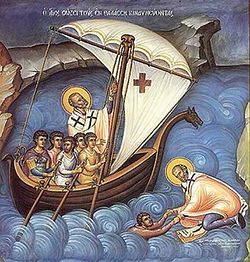 Every year on St. Nicholas’ feast-day, Abbot Dorotheos gives out little packets of blessed wheat from the lity in honor of the saint. A few years ago, just as he had given out the last packet, a local fisherman came in and hurried to the altar to receive his wheat. Instead, the abbot gave him a small bottle of oil from the kandili hanging over the saint’s icon. The fisherman put it in his coat pocket and left. A few weeks later he was at sea when a sudden storm arose. Although he was a skilled sailor, the storm became violent and, unable to get to shore, he feared that his boat would capsize. He began to pray to St. Nicholas, and remembering the holy oil, took the bottle from his pocket and poured it into the sea. Immediately the wind ceased, and in a short time the water around the boat was as smooth as glass. The fisherman sailed back to Andros, giving thanks for the saint’s intercession.

Fish for the Feast

In the 1980’s, Father Dorotheos was acquainted with the abbot of a small skete on Mount Athos near Karelia where there is a church dedicated to St. Nicholas. On one of the saint’s feast-days, however, there was no fish, and the monks were left with only beans and bread for the celebration. Fr. Damaskenos, the abbot, was unhappy about keeping such a poor feast, and prayed to the saint, “I’m sorry, but we have no fi sh to honor you with.” A few hours later a fisherman walked into the skete carrying a large bag of fish. Setting the bag down, he said to the abbot, “These are for you.”

The abbot asked where he had come from and the man replied that he was from the middle peninsula,[3] but had been blown off-course while fishing and landed miles away on the Athonite coast. Knowing that he was too far from any settlement to get his fish to market before they spoiled, the fisherman was surprised to see an old man suddenly emerge from the woods, who asked him where he was from. The fisherman told his story and the old man replied that he would buy the fish. He paid him, and told the fisherman to take the fish to the skete “for my feast.” The simple fisherman didn’t think about the strange words until the abbot asked him what the old man had looked like. Pointing to an icon of St. Nicholas, he replied, “Like that.” The monks celebrated the feast with great joy, and the abbot, in relating the story to Father Dorotheos, told him that to his great regret, he had not thought to ask the fisherman to trade him the money given to him by the saint.

One woman from Thessalonica came to the monastery a few years ago and told Abbot Dorotheos and the monks that one day, while walking to church with her four year-old son, the child was attracted by something in the road and letting go of her hand, darted into the busy street. A huge truck was approaching, and just before it hit him she screamed out for St. Nicholas. After the truck passed over her son’s body, she ran terror-stricken into the road, expecting to find him dead. Instead, he stood up seemingly unscathed, and when she asked him if he was hurt he said matter-of-factly, “Oh no, the old grandfather laid on top of me in the road.”

The Guardian at the Gate

About twenty years ago, when Father Dorotheos was living alone in the monastery, two of the monastery’s tenant farmers became dissatisfied and irrationally demanded that they be granted clear title to their farms. If this didn’t happen, they threatened, they would make trouble for the monastery. They were as good as their word and one night showed up intending to break in. As they approached the big front gate (now fitted with a heavy wooden door and iron bars, but then only an open archway) they were met by an old man, slightly balding, with gray hair and beard, wearing a long brown cloak. He stopped them and said, “Go away, I’m here.” The men rudely replied, “What’s that to us? Out of the way, old man!” and started to push past him. He answered with the compelling command, “Look at me!” Surprised, they turned, and as they looked at him, rays of light shot from his eyes. Terrified, they ran to Apikia, the nearest village, where they told everyone they had seen the saint.

On the next St. Nicholas Day, not long after, one of the men brought a huge artos[4] for the feast, and the abbot, smiling, asked him, “Are you still planning to make trouble for me?” Embarrassed, the man replied softly, “No,” and gave the abbot his offering for the saint.

Saved from an icy death 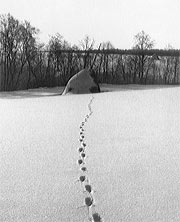 Archimandrite Philadelph (Mishin) recalls a miracle of St. Nicholas that happened while he was in exile (from The Sretensky Calendar: Testament of the New Martyrs and Confessors of Russia):

“I was in exile. It was a hungry year. The work was very, very hard. There was nothing to eat. Absolutely nothing. And it was a harsh, grey winter. Transportation was stopped, and deliveries ended. We were completely hungry and cold for several days, and to make matters worse, the temperatures dropped to forty below. Birds froze in flight. And the rags we wore… Many of my brothers fell; they lost their strength and couldn’t walk. I was also getting ready to die from hunger and cold.

“We spent the night in separate huts—tiny, shabby ones. We stuffed the window with rags. There was snow on the floor—it blew in through the cracks. The door was half-open. A whole mass of ice had frozen on it.

“There was a cold wind. I lay there, wrapped in rags. The frost crept up and turned my whole body to ice. Suddenly, I wanted to sleep, badly. I knew perfectly well—that is the herald of death. Had I dozed off but a little… that’s all, I would not have risen for ages. Rising with all my strength, I decided to pray for the last time to St. Nicholas the Wonderworker. “O God-pleaser,” I said to him, “I’m dying. You see everything. You are the quick helper, so come and help me.” I don’t remember what happened after that, what I said or didn’t say—I don’t remember. I only heard a loud knocking at the door. I opened it. There was a strong gust of wind and cold snow smacked my face. There was no one there.

“But what was this? There were fresh footprints going from the door. I looked on around the corner… A large sack was standing there, and the snow had not yet covered it. My God, what sort of phantom was this? I looked around again for tracks. They went off in the direction of the forest. Not a soul anywhere around—only the snowstorm gathering strength.

“I took the sack. It was heavy. I took it inside the hut and opened it… My dear children!...” the elder began to sob. “There were fresh loaves of bread in the sack. And they were still warm, absolutely hot! As if they had just taken them out of the oven. But what oven could be there?! There wasn’t a single home within fifty versts, only exiles and prisoners.

"Well, we lived on this bread a whole week. When the snowstorms quieted they brought us rations, and no one died then. In other camps, we heard, many froze in that storm. But none of ours froze. Wonderworker Nicholas, save us!...”

[1] "Pskov Caves Patericon, Tatianin Den', 1996:9.
[2] From Nun Nectaria McLees, "St. Nicholas Monastery and the Island of the Winds," The Road to Emmaus, 2:4 (#7)
[3] Mt. Athos is the most eastward of three peninsulas that jut out of the mainland of northeastern
Greece.
[4] Artos: A round loaf of bread (sometimes very large) that Greek Orthodox Christians bring
as an offering during the lity, at the end of the Vespers service. The blessed bread is eaten
after the vigil.
Comments

Sterling Bowen12/24/2011 12:03 pm
I ask my inner self: "Do you really believe all that which has just been related?" i.e. the miraculous stories re St. Nicholas

The self replies: "Yeh, I kinda do. But only because it comes from the ancient faith, which in our day might be called Pravolsalvie, giving the stories therefore, verisimilitude."
×