A true incident which shocked and brought repentance to hundreds of people in the Russian Soviet city of Kuibyshev (modern day Samara), in the year 1956.

In the city of Kuibyshev there lived a family: a pious mother and her daughter Zoë. On the evening of New Years Eve (December 31) of 1956 Zoë invited seven of her girlfriends - and just as many young men - over for dinner and dancing. At that time it was the fast for Christmas* and Zoë’s mother begged her not to plan a dinner, but the daughter insisted on having things her way. That same evening her mother went to church to pray.

A true incident which shocked and brought repentance to hundreds of people in the Russian Soviet city of Kuibyshev (modern day Samara), in the year 1956.

In the city of Kuibyshev there lived a family: a pious mother and her daughter Zoë. On the evening of New Years Eve (December 31) of 1956 Zoë invited seven of her girlfriends - and just as many young men - over for dinner and dancing. At that time it was the fast for Christmas* and Zoë’s mother begged her not to plan a dinner, but the daughter insisted on having things her way. That same evening her mother went to church to pray.

All those invited came over, except for Zoë’s fiancé who hadn’t arrived yet. His name was Nicholas. The young ladies and the boys got in pairs and Zoë was left alone. Not knowing what to do and without really thinking, she took down the icon of St. Nicholas the Wonderworker from the wall and said, “I’ll take this Nicholas and I’ll go dance with them,” not paying any attention to her friends, who advised her not to commit such a blasphemous act. “If God exists, let Him punish me,” she said. And so she started to dance, did two or three twirls, when all of sudden there was a fearful noise in the room, a whirlwind, and a blinding light flashed like lightening. 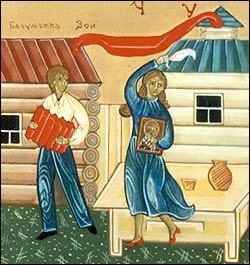 The former joy turned into fright. Everyone fled from the room scared. Only Zoë stood there motionless, with the icon of St. Nicholas stuck to her chest, petrified and frozen like marble. The doctors, who arrived quickly, were not able to bring her to her senses in spite of their attempts. The injection needles, which they tried to stick in her, bent and broke as they hit her marbleized body! They wanted to take her to the hospital, but were unable to move her from her spot. It was as if her feet were nailed to the floor. But her heart was beating! Zoë was alive. However, she was no longer able to eat or drink…

When her mother came back and saw what had happened, she fell unconscious and they took her to the hospital, which she didn’t leave from for a few days. Her faith in the compassion of God and her warm motherly prayers for the forgiveness of her unfortunate daughter, by the Grace of God, restored her vitality.

Zoë came to consciousness and with tears she sought forgiveness and help.

Zoë’s house was surrounded by a crowd of people for the first few days, faithful who came or, even yet, walked from afar: the curious, doctors, and spiritual personalities. But according to an order from the authorities, the house was quickly closed to visitors. There were always two policemen guarding the house, in alternating eight-hour shifts. Some of the guards’ hair turned white, even though they were still young (28-30), from the fright of hearing the terrifying cries that Zoë made every night.

Night after night her mother was next to her praying. “Mama, pray! Pray, because I’m lost on account of my sins! Pray!” Zoë would cry out.

Because of all the things that were happening they even informed the Patriarch and asked him to pray for Zoë’s recovery. The Patriarch replied, “The one who is punishing her will also have mercy on her!”

From then on, among those who were allowed to visit Zoë were:

1. A professor of medicine of high prestige who came from Moscow. He had confirmed that her heart did not stop beating.

2. Priests, who the mother had invited in order to take St. Nicholas out of Zoë’s hands. But neither were they able to pull the icon away from Zoë’s petrified hands.

3. The Hieromonk Seraphim from the Glinsk desert, who had come to Kuibyshev for the feast of the Nativity, performed the Holy Water service and had blessed the icon. Afterwards he said, “Now we must wait for some sign at Pascha! If nothing happens, it means that the end of the world is drawing near!” showing by these words his deep faith in miracles.

4. The Metropolitan Nicholas, who also read the Paraklesis and said, “We must wait till Pascha for a new miracle,” repeating the saying of the pious hieromonk.

On the eve of the feast of the Annunciation (which that year fell on the Saturday of the third week of Great Lent) some genial elder approached the guards and asked them to allow him to see Zoë. But the police guards refused to allow it. The elder came again the following day, but neither did those guards allow him. The third time, on the day of the Annunciation, the guards allowed him in. They heard with how much compassion he spoke to Zoë as he entered, “Now then, did you get tired from standing?”

A little time passed and when the guards wanted to kick the elder out, he wasn’t to be found in the room… Everyone was sure that it was Saint Nicholas himself.

Thus, Zoë had stayed there standing for exactly 4 months (128 days) until Pascha, which that year had fallen on April 23 (May 6 on the New Calendar).

On the night of the Glorious Resurrection of Christ Zoë started to cry out especially loud: “Pray!”


The nightshift guards started to tremble and asked, “Why are you crying out so frightfully?” Pay attention to her answer. “How dreadful, the earth is burning! Pray! The whole world is lost because of its sins, pray!” From that moment Zoë was revived, her muscles started to become soft; she came back to life. They eventually put her on a mattress but she continued to cry out and call all to pray for the world which is lost because of its sins, for the earth which is burning because of its lawlessness.

“How did you stay living up till now? Who fed you?” they asked her. “Doves, doves fed me” was her answer. From this it was apparent that she had received mercy and forgiveness from the Right hand of the Lord Almighty. The Lord forgave Zoë’s sins, by the attendance of St. Nicholas the Wonderworker, and because of her great tribulations and her standing for the duration of 128 days. 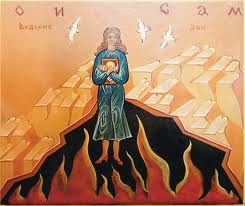 All of these events shocked the inhabitants of Kuibyshev and the surrounding areas. Many people again found their faith in God, having seen the miracles, hearing her screams and her entreaties for us to pray for the people who are lost on account of their sins. They returned to the Church with repentance. Those who didn’t wear a cross started to wear one, when at that time you might have paid with your life just for that. The return was so en masse that the churches didn’t have enough little crosses for everyone who sought one.

On the third day of Pascha Zoë left for the Lord, since she had traveled the difficult road of standing for 128 days before the face of the Lord for the forgiveness of all of her sins. The Holy Spirit had preserved her life all of these days for the resurrection of her soul from the death of sin, just as in that eternal day to come it will resurrect her bodily for life everlasting; for that matter, just as her name itself means: Zoë.

Note (from the Russian original): In the Soviet press of that time period Zoë’s incident was brought up. Answering the letters that came to the management of a well-known newspaper, one haughty scientist claimed that the occurrence with Zoë is really not that incredible, but he declared that it is one form of muscular rigidity still unknown to science. This falsehood of such a hypothesis is apparent, seeing that: First, with rigidity such a petrified hardness of the skin does not occur, so much so that the doctors are not able to inject the sick. Second, a person infected by such a sickness can be moved from one place to another, while they were not able to move Zoë; she was standing up straight definitely much longer than average people can. Third, a sickness by itself does not return a person to God and does not bring revelations from Heaven. While in Zoë’s case, not only thousands found their faith again in God, but they showed their faith in deed, that is, they were baptized and lived morally. Not only did they believe that God exists, but they became Christians. From this it is clear that we are not talking about some simple illness, but about divine economy. He [God] truly makes fast the faith, to deliver people from their sins and from punishment because of them.

Artem Zinin1/4/2021 1:43 am
@Frans Van Brussel: Are you calling Amoris Letitia heretical, or St. Nicholas heretical? St. Nicholas couldn't leave the Roman Church because the Roman Catholics seceded from Orthodoxy in 1054. The root of heresy lies in Roman Catholicism, such as the papal office, papal infallibility, the Filioque, ecumenism, etc. To call a verified and canonized Saint heretical is absolute nonsense...

Frans Van Brussel6/6/2017 4:27 pm
How should Catholic believers react to the heresies of
"Amoris Letitia"... Like Saint Nicolas ???? Leaving the
Roman Church????

Ksenia11/5/2015 6:15 am
Does anyone know how they know if it is really true? I don't have any trouble believing Saint's stories. Has anything like this ever happened before in a Saint story? That doesn't mean something completely new could not happen, especially in these last times.

there are also the Orthodox movies- in English subs:
The Island-(Ostrov). English Subtitles.
http://ireport.cnn.com/docs/DOC-864883

Elder Paisios - An Orthodox Saint of our times.
http://ireport.cnn.com/docs/DOC-865254