St. Joasaph of Belgorod, in Verse and Song 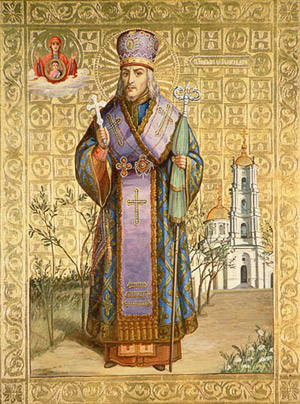 Holy Hierarch Joasaph of Belgorod.
Saint Joasaph of Belgorod was born in Proluka, Poltava province, on September 8, 1705, on the Feast of the Nativity of the Mother of God. He was a descendent of the noble Ukrainian Gorlenkovi family. His name in holy Baptism was Joachim.

Joachim's father enrolled him in the Kiev theological academy at age seven. There the boy came to love the monastic life. Although his parents were against it at first, Joachim held to his intention, and in 1727 he was tonsured a monk at the Kievo-Bratsk Monastery.

Joachim's virtues were noticed by his ruling hierarch. He was brought through the ranks of service in the Church, showing himself to be an able administrator, but also an ascetic and man of prayer. He served as abbot of the Mgarsk Monastery of the Transfiguration, and later as vicar of the Holy Trinity-St. Sergius Lavra. He was finally elevated to the rank of bishop in 1748, and appointed bishop of Belgorod.

St. Joasaph labored constantly and tirelessly in his service to the Church, with no regard for his health. He died at age 49, on December 10, 1754. St. Joasaph was canonized by the Church on September 4, 1911.

The following vignette about the saint is from Patristic Talks with Children (Moscow, 1997, reprinted from a 1901 edition), translated by Maria Naumenko.

The Queen of Heaven is particularly close to children who call upon her. She loves and helps them. Once the father of the holy Russian hierarch Joasaph of Belgorod was sitting on his porch at sunset pondering on what awaited his son when he grew up and finished his studies. Suddenly he saw the Mother of God in the air and his son on his knees, praying at Her feet. Then he heard her say to Joasaph, "Your prayer is enough for me," and from the heights an angel flew down and cloaked the youth in a bishop's mantle. Thus Saint Joasaph, while still a child, prayed to the Queen of Heaven, entreating her never to leave him, and she never did!

We must also pray to the holy God-pleasers, the saints, those fervent intercessors before God for us. There are entire books written about the miracles wrought by Saint Nicholas, Saint Sergius of Radonezh, Saint Seraphim of Sarov, and others. The holy ones are very close to children who call upon them. Listen to what happened to one little boy. From the age of four, his legs and arms were bent and he was unable to walk. Once, when all in the house were sleeping, the mother heard her son's voice: "Mama, Mama!" She asked what he wanted. The boy replied: I saw a dream. An old man appeared to me and said, "Why are you crying?" I replied: "I am a cripple and can't work, my father is poor, I am a burden to him and he grumbles." "It is good that you pray to God," continued the old man, "but do not cry. Go to Belgorod, pray at the tomb of Saint Joasaph, and you will walk." The words of the hierarch came true. When the boy was brought to the relics of the Saint, he began to cross himself and then he was able to walk. Prayer is so soul-saving. Therefore I beg you, children, make a habit - and never leave it - of praying morning and evening and before beginning and ending any work. Children who turn to the Queen of Heaven and to the God-pleasing saints in their needs and sorrows draw closer to them and are protected from many calamities. Pray to the Mother of God and the saints. The Mother of God and the saints once lived on earth and were themselves in need of help from people, asking their protection and intercession.

St. Joasaph has been an inspiration to many Orthodox Christians—even to verse. This poem was written by L. N. Pogozheva, and put to music by the well-known spiritual bard, Archdeacon Roman Tamberg (+1998). The song can be heard in the original Russian, sung by Archpriest Alexei Grachev (+1998), who died together with Fr. Roman in an automobile accident. The simple tune can be readily applied to the English translation. May this little song make St. Joasaph ever dearer to the parents and children who sing it, and may they pray for the peaceful repose of Fr. Roman and Fr. Alexei.

A Song to St. Joasaph of Belgorod 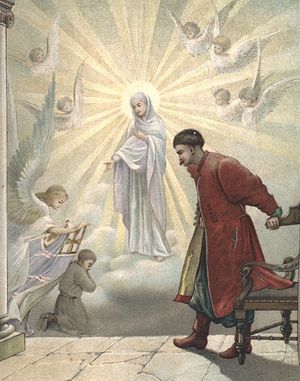 Appearance of the Mother of God to St. Joasaph's father, Andrei Gorlenko.
A frost-covered moon shines above in the night
The light of the lamp flickers, quiet.
A saint contemplates in his chamber the sight,
Of visions that passed, of his childhood.

Bright was his youth, and yet brighter his dreams,
Heavenly visions so sinless,
He joyously fasts in repentance and weeps,
Prayers through the night, labors endless.

The far away Lavra then rose up again,
St. Anthony's relics so fragrant,
The monks in the choir in prayerful chant,
The boisterous bell ringing trailing…

Zealous in services, fearless in speech,
Rebuking the sins done in darkness,
Sermons of truth, like the angel's sword breach
The sin from the sinner who hearkens.

Hushed in the house in Graivoron town,
The lamp's holy flame is now dying,
In the dark wood stands a hut all alone,
An elder sits weeping and sighing.

A heavenly voice from above he has heard,
"Your son, the good bishop's departed."
He looks to the skies, and lo there in the stars,
A choir of angels imparted.

The old man remembers yon forty years past,
He saw then so clearly a wonder:
The Heavenly Queen 'pon the heavens abreast,
His son knelt in prayer thereunder.

From heaven She sends him a mantia down,
And says to the boy in assurance,
"I hear all your prayers, my own little one,"
God's Mother then heavenward turning.

The vision came true! Thus he ponders in tears,
Trembling in spiritual wonder,
And whispering soft in his in his awe and his fear,
"A good man of prayer has gone yonder."

Frosty the evening, the bright moon is whole,
The twinkling stars by it paling,
While up to the heavens a saintly soul
To God the Creator is sailing.