When and How Should We Celebrate the New Year? 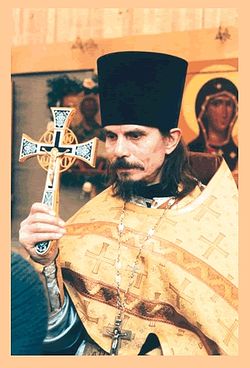 Archpriest Alexander Shargunov
Throughout the Nativity fast, there are not a few Church feast days on which the typicon allows fish and wine. Christian love and discernment allows an Orthodox Christian to sit at the table with his friends and drink a glass of wine in the normal manner. We always serve a moleben of Thanksgiving on civil New Year's Eve, and that is the proper thing to do. Some people mistakenly believe that Orthodox Christians should not participate in this event. "That has nothing to do with us," they say. "We are on another calendar, and New Year's Day can only come according to the old calendar—that is, on January 14."

There was a time in Russia when New Year's Day was celebrated on September 1, and it coincided with the Church New Year. Even now, we begin the cycle of our Church feasts from that day. However, under Tsar Peter I, the civil New Year was transferred to January 1, as it was in Europe. In general, this date is quite relative, and in the final analysis we could choose any date at all to begin the New Year.

Celebrating the New Year is a matter of natural human relations, and we can participate in it like everyone else. It is just as normal as calling a city by its current name and not by whatever name we want to call it.

Furthermore, there is particular significance in this: it is a kind of prophecy about what is happening with us today. When God came into time He sanctified this time, and it is sanctified throughout time by His presence. If our society would live according to this mystery which Christ brought, then it would make sense to celebrate the New Year according to the Church calendar—on January 14. But mankind is becoming less and less involved in Church life, and lives on his own, according to his own rules. This "de-churching" is leading to the dehumanization of society. Nevertheless, we live in this society; and the difference in dates reminds us of the reality we live in.

Regarding this, we would like to look at two points that are very important in understanding what is happening to us today.

Beginning from a certain time, the goal of time has changed; it has become something different. As we know, the West changed calendars in the sixteenth century. This coincided with an era when human society began living differently from the way it did before. Instead of striving towards eternity, which is natural to man by nature, people began striving towards an enigmatic future. They ceased to live according to the goals of the present day, but rather according to the goals of tomorrow. This finally led to revolution in Europe, and the devastating revolution in Russia.

Today people sacrifice the present for the future. Thus they lose both the future and the present, the heavenly and the earthly; they lose both eternity and time. Today, a process of unification is afoot for the sake of the future. Borders are being erased—not only political and economic, but also the inimitable national, and simply human, characteristics that belong to every unique and inimitable human being. This unification will end, as we know, in the reign of the man of iniquity, who will establish the supposed triumph of all times and of all achievements that could take place in time—but with the total loss of grace-filled eternity.

For the sake of this grace-filled eternity, we should take care to preserve our "sacred time"—the Church services according to the "old style"—although we live in society according to the civil calendar. For the sake of keeping our fasts and feasts with the saints of all ages, our Church calendar should remain unchanged, unmoved, like eternity, which enters into our life through these events.

A Christian lives in two dimensions—time and eternity. May God grant us in this new year to be worthy citizens of our Fatherland, both earthly and heavenly. No matter what trials await us on earth, if we are faithful to the Lord, He will once again prepare heavenly consolations for each of us on the feast of the Nativity of Christ, and later on the Pascha of the Lord, and on all the great feasts, inviting us to become participants in His eternal joy. The holy fathers say that when there is no festival in the soul, one cannot create any real external celebration. People so often live according to the principle of "killing" time; but the meaning of a Christian life is to revive the time.

In connection with this, let us contemplate the mystery of time. The holy fathers have an interesting explanation of the mystery of emptiness and boredom in human life. This mystery consists in the fact that the time in which mankind lives has lost its connection with eternity, and the days do not have the blessing of God. This happens to people who do not know God. It also happens to people to participate in the Church feasts in a purely external way. It even happens to people who have had some contact with grace-filled life, but that grace did not fill their entire being; it did not expel the deception and death that is in each person.

In the beginning, Adam possessed everything, but felt that there was something missing, and he was bored alone. Then Adam and Eve were bored together. Then Adam, Eve, Able, and Cain were bored as a family. When people began to proliferate on the earth, the boredom only increased. What happened as a consequence of that boredom? First, man fell into sin; then, mankind fell into building of the tower of Babylon.

The fall happened because man desperately sought false happiness and false joy, not knowing the cause of the boredom that filled him, but clearly aware that no earthly care, no work, no outward glitter, no success can fill this emptiness within him. To this day, man has a poor understanding of how significant he is, and that he can only be filled with God Himself and the life that the Lord gives him.

Man tries to fill this emptiness with alcohol, narcotics, or some other sin—even the most despicable ones. The more he fills the emptiness, the more dreadfully it yawns, and he can go on like this to the point of madness. One priest told me about a person who killed himself only because it became unbearable for him to do the same thing every day: again get out of bed, again wash up, again get dressed. When the last thread uniting time with eternity breaks, a person can come to a state of the darkest despair.

Man is by nature inclined to participate in celebrations, so that his life would be festive and joyful. Man suffocates in three-dimensional space. The "wearisome repetition" of earthly existence, as it is described in the Holy Scriptures, is unbearable. Man is overcome by such boredom that he loses his mind. He must fill this emptiness inside him with something, for he is created for eternal life. What doesn't he do, what substitutes doesn't he allow!

For example, take Sunday. For a Christian, this is the day when the Lord was victorious over the death that reigned in time. It is our communion with eternity.

Nevertheless, for the majority of people, who live only in time, this is called the "weekend"—no more than a day of rest from work—dead time. But man's nature remains unearthly. Some recollection of happiness remains in these people's memory, and they feel as if morally obligated to make merry and be happy. But this merriment can be dangerous. Trying to quench this absence of joy in his life, a person may seek it in wine, for example. Not finding consolation in time, he sinks deeper and deeper into false sweetness, and the deeper he sinks, the greater his boredom. This sometimes takes on insane forms. Why are our people now drinking more and more, and there is nothing to stop the process? Because without God, people cannot find real joy in anything, nor can they comprehend any meaning in the sorrows sent to them. This is also the reason for the current spread of sexual sin.

On New Year's Day, the Church commemorates the martyrs Boniface and Aglaida. People pray to these saints for deliverance from the passions of drunkenness and fornication, because these saints also suffered from those vices for a long time. But the Lord revealed to them that life is a treasure, that there is higher joy prepared for man; and these two became capable of giving their lives for Christ, for the sake of eternal life. Only this can prevent us from losing the meaning of our existence. But until we strive for eternity, we are doomed to live in dead time.

May God grant us awareness of ever approaching death—not to fear it, as do those who do not know Christ, but rather to be filled with joy because we are coming ever closer to our meeting with the Lord. May He grant that our New Year's wish for happiness might not sound false, for it implies the newness of that eternal, incorruptible, unaging life which the Lord gives us in time, and reveals to us in its fullness in eternity. We wish you all a happy New Year!

Gregorios1/1/2016 5:19 pm
I believe the Church (which is one and undivided) uses both the Julian and the revised Julian calendars. I have never heard of any Orthodox Church using the Gregorian calendar. Since anathemas have not been pronounced between brothers who use either of these calendars, I think it is not safe to say that one calendar is true and one false. Our liturgies have undergone revision through the centuries yet we do not call the first forms of worship alone "true."

Matthew1/1/2015 2:18 am
Joanna,
Fr. Alexander is not following the New Calendar at all, but rather the opposite. In the second to last paragraph, he is merely pointing out that the feast of St Boniface and St Aglaida, which falls on Dec. 19th, corresponds to New Year's Day on the secular calendar, and how their example and our prayers directed to them lift our mind towards eternity, thus giving meaning to our present existence, which is otherwise 'dead time'. This is an excellent message to receive amidst the noisy festivity which can so often be a distraction from our true purpose.

Your comments are incoherent. I can't understand what you are trying to say. At the end, you still mix the two calendars. Jan. 1st is not St. Boniface. Jan. 1st is the Circumcision of Christ and St. Basil the Great. This falls on Jan. 14h of the Gregorian Calendar. St. Boniface is Dec. 19th, which is YOUR Jan. 1st, of the Gregorian calendar. So you're celebrating the New Calendar.

If you want to uphold the "old style" then get your calendars straight. But, it's really not an "old style". It's the true style. Why do you new calendarists continue to reject what God has established with the Julian calendar?