The Peace of Christ

Glory to God in the highest, and on earth peace, good will toward men.
Lk. 2:14 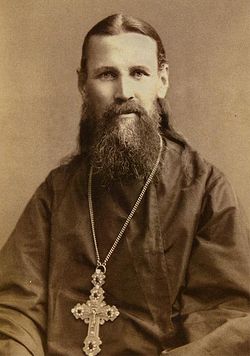 Our holy righteous Father John of Kronstadt reposed in the Lord on December 20/January 2, 1908, just a few years before the revolution in Russia that would topple the order that he mentions in this homily. But his message remains timely even to this day—and not only in Russia.

This song to the incarnate God, the Infant Christ, was sung by the angelic hosts on earth at His Nativity. It is a brief song, but its meaning and significance are wise and full of substance. In it is contained and revealed to us the mystery of the incarnation of the Son of God for the salvation of the world. This mystery, in the words of the Church, amazed all the angelic powers.

But where is this peace on earth, which the angels announced to the Bethlehem shepherds?

In Jerusalem itself, the city of David, where was the temple of the living God, there was no peace. When the magi who came from the East to Jerusalem asked, "Where is the King of the Jews Who is born?" King Herod was enraged just to hear it, as was all of Jerusalem with him. In the world empire of Rome, there was no peace. Contemporaries describe in dark colors the moral degradation of the nations, and the deformation of God's image in people. All manner of defilement and iniquity was practiced then. Idol worship replaced the worship of the one God. Iniquity, shame, satiety, and drunkenness were what comprised mankind's earthly happiness, aim, and striving. Enmity, civil strife, and disorder reigned everywhere. Pride, inhumanity, and all manner of vice corrupted social and family life.

The period that followed was no better. Terrible persecutions against those who believed in Christ drenched the world in blood over the course of three centuries: brother betrayed brother to torture, husbands betrayed their wives and children, children betrayed their parents. Human relations, blood ties, and family were all profaned and scorned. And in Jerusalem itself, there was the abomination of desolation.

In our times also, societies and kingdoms are also being shaken, international and civil wars and dissention continue, there are heresies and schisms, conspiracies and criminally destructive teachings are intensifying to topple age-old state institutions and foundations of family, civilian, and religious community.

Evil raises its sacrilegious hand against the anointed of God, to whom God Himself has entrusted nations. The savages want to install unbelief atop the sacred remains, destroy the state, the family, and law in the guise of equality and brotherhood.

This is the mystery sung by the angels: with the coming of the Son of God on the earth, peace began to reign at first in the small, chosen flock—His Church, in the Apostles whom He often taught this peace, and later in the whole kingdom of grace, His Church, which spread throughout the world.

Yes, brothers, a whole kingdom of God's world is established by the Lord—a kingdom which is eternal, universal, and orderly; with laws, rules, and sacraments; with an order of services, guidelines for life and inter-personal relationships. This kingdom is the holy, Orthodox, Apostolic Church, where there ever abides peace and joy in the Holy Spirit, the grace of our Lord Jesus Christ, and the love of God the Father.

True, the Church of God on earth was always under the cross, always persecuted, and hated. But nevertheless, it always possessed an inner grace-filled peace—even during the cruelest persecutions, for God has always been and always will be in it, delivering it from all calamity according to His word that the gates of hell shall not prevail against it (Mt. 16:18).

Therefore, every truly believing person who keeps Christ's commandments, every truly repentant sinner has the peace of Christ within himself, and no external troubles of this world can destroy it—if only that person does not will to step once more upon the path of iniquity and sin.

Therefore, if earthly kingdoms and civil societies in general wish to attain and establish the peace brought to earth by the King of righteousness, peace, and love—our Lord Jesus Christ, then they should be closely united with the kingdom of the Lord, or His holy Church on earth; they should submit themselves to the commandments of Jesus Christ and the rules of His Church. Should these commandments be broken, they should quickly straighten themselves out, after a sincere admission of their mistakes and iniquity. Members of a state that confesses the Christian faith should be kind, honest, and sincerely dedicated members of the Church. Disruption of this union between the Church and state, that is, its citizens, neglect of faith, the commandments, and the Gospels give birth to unbelief and all social disorder and vice, cause moral or political impotence in that society, and deprive it of the blessing of heaven.

Russia as a great nation was always closely tied with the Church; and only within this union was it able to grow, strengthen, and ascend to the heights of its might and glory. May God grant that this union of the state and the Church—this kingdom of peace—always continue! Then Russia will be a kingdom of peace, and God's blessing will be upon it. Then no sedition will be frightening, because it will not find a place to settle in.

May our Lord Christ reign in our hearts, and may peace and blessing reign with Him! Amen.

Editor1/7/2016 11:22 pm
Chris, OrthoChristian.com is the English edition of Pravoslavie.ru, which is a website produced by the Moscow Sretensky Stavropegic Monastery. This monastery is under the Moscow Patriarchate. Thus, it is monitored by monks and clergy of Sretensky Monastery, who are answerable to the the Patriarch of Moscow and All Russia.

Chris Ulan1/5/2016 3:55 am
There are many jurisdictions in the Holy Orthodox Church.

This site does not give any information as to who monitors the entries and how legitimate they are.

What is the jurisdiction that is responsible for this site?