From the book Church Indestructible, published by the Moscow Sretensky Monastery. 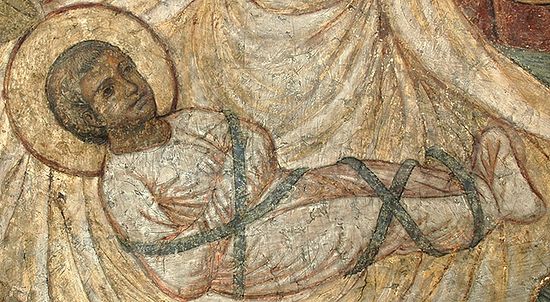 Fresco of the Christ Child, Sretensky Monastery, Moscow.
It happened in 1986 in the old age home where I was working as a therapist. There was an old woman living there on the third floor… The "third floor" most likely means little to you—what difference does it make what floor she lived on? But for those who worked in that old age home, and especially for its residents, the words "third floor" had a specific, ominous meaning. There were two departments on the third floor: one for the bed-ridden and dying, and another for those with psychiatric problems. The entrance to the third floor was kept locked; not all personnel were even allowed there, never mind other patients or relatives. If a person ended up on the third floor for one reason or another, he was as if vanished from the land of the living, even though he might still exist somewhere up there, behind the closed doors of the third floor…

Well, on the third floor there lived an old woman with the last name, Makarenko. Unfortunately, I have forgotten her first name—perhaps Eudocia, or Parasceva. But I do remember what the orderlies called her behind her back—Banderovka.[1]

She was brought to our old age home from some distant forestry station, although she was not a native of the north, but of the Ukraine. She had no living relatives. Here is why they called her Banderovka: Whenever she saw someone wearing a white hospital smock she would start begging with fear, muttering, "I'm Ukrainian. I'm not a Banderovka, no, I'm Ukrainian… Save me… I can work. I can milk a cow, I can sew, clean… Save me…

The present did not exist for her, only the horrifying past, about which we could only guess. She lived in that past. She was always trying to run away and hide. That is why they put her on the third floor. If one of the medical personnel neglected to lock the door, she would run away from there, also. Every escape would end the same way—they would catch her hiding somewhere under the staircase or in the park near the home, or even in the neighboring village, and return her to the third floor, under lock and key.

Her illness was incurable. No one had any hope that reason would ever return to her.

In 1986, a few days after New Year's Day—January 7, to be precise, the residents of the old age home improvised a concert in the second floor hall, near the library. I can still see that scene before my eyes today. About fifteen people gathered in the hall—twenty elderly men and women. Some had settled into armchairs, others pulled up folding chairs, while others stood who found no place to sit, holding on to the backs of armchairs or window sills for support. One emaciated, gray-haired man, with what was left of war medals on his jacket, sat in an armchair with worn and tattered green upholstery, playing an old-fashioned accordion, his fingers not so obedient as in days of old. He was playing something merry and dancy. When the elderly were admitted to the old age home, they were allowed to bring only the most basic necessities, or the most valuable thing. Some would bring their pillow or other moth-eaten content of a cherished trunk. This old man had brought his accordion…

Next to the man, a hunch-backed old woman was tapping her feet in her felt boots, hands on her hips, gray wisps escaping her flowered headscarf. It probably seemed to the poor thing that she was sixteen again, dancing like the wind, her thick, crimson braid flowing behind.

Then suddenly, the old lady—Banderovka—appeared from somewhere on the third floor. Apparently, the nurses and orderlies were still celebrating the New Year, and had left the door unlocked. When the man stopped playing, she walked up to the gathering and said that she wanted to sing, "Because today is the Nativity of Christ." Without waiting for an answer, she began to sing a little song in her trembling, aged, but pure voice.

Now I know that it was not just a little song, but a Ukrainian Christmas Carol. Christmas carols are usually happy. But the carol this old lady sang was sad, even tragic. It was a lullaby to the Christ Child, "Sleep, Jesus, sleep…" In this carol, the Christ Child was called "Little One," "The Lily," and even "My Little Heart"; in short—all the affectionate appellations used by temperamental Ukrainians to describe the one they love more than anything else on earth.

A few lines of this carol immediately come to my mind. True, I might not have understood them properly since I do not know the Ukrainian language. But translated into Russian, they would mean this:

Isn't it frightening? After all there He is, this defenseless Infant, this Little Lily, this Little Heart, lying in the manger, smiling and trustingly stretching His hand toward the Virgin Mary, Joseph, and all he sees before Him. Meanwhile, wicked people seek His soul, and prepare a terrible death on the cross for this innocent Babe.

The carol was pretty long, but amazingly, no one interrupted the old woman's singing. All stood silently listening. Even those whose wall or window sill was adorned with a postcard or newspaper portrait of Lenin… Even we, the medical personnel, forgot in that moment all we had learned in our "scientific atheism" classes.

The old woman finished singing her carol; then without saying a word, bowed deeply to all, and walked slowly toward the staircase leading to the third floor… After her departure, all the merriment somehow ceased. The gathering dispersed, each one thinking his own thoughts.

The weekend arrived. When I returned to work on Monday, I learned that the old woman from the third floor had died that Saturday night. Thus, that carol she had sung two days before her death turned out to be her swan song. But the strange thing is that this woman was, as we in medicine say, "disoriented in time and space." She lived with the terrifying memories of her past. Nevertheless, on that day she had behaved not like a mental patient, but like a healthy person. She even returned to the third floor of her own will in order to die there. Most important of all, that day was Christmas, the Nativity of Christ.

I recall a poem that we learned by heart in school. It was written by Nekrasov about the prophet that God had sent so that "the slaves of the earth would remember Christ." I think that the Lord had returned reason briefly to the old woman from the third floor in order to remind us, the mindless "slaves of the earth," of the sin of not knowing God, the most important thing; to remind us that on that day, "for us and for our salvation," was born the Savior of the world, Christ.

[1] Stepan Andriyovych Bandera (1 January 1909 – 15 October 1959) was a Ukrainian politician and nationalist in the western Ukraine, assassinated by the KGB for his collaboration with the Nazis. His movement is still controversial due to the violence and terrorism it involved.