The Word Became Flesh. A Sermon on the Nativity of Christ 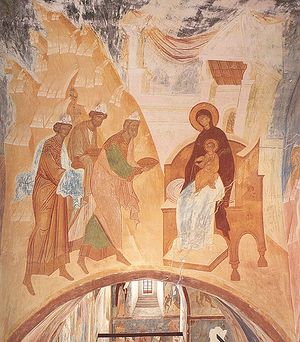 Adoration of the Magi. Fresco by Dionisy and sons, 1500 - 1501.
The Word became flesh; that is, the Son of God, co-eternal with God the Father and with the Holy Spirit, became human – having become incarnate of the Holy Spirit and the Virgin Mary. O, wondrous, awesome and salvific mystery! The One Who had no beginning took on a beginning according to humanity; the One without flesh assumed flesh. God became man – without ceasing to be God. The Unapproachable One became approachable to all, in the aspect of an humble servant. Why, and for what reason, was there such condescension [shown] on the part of the Creator toward His transgressing creatures – toward humanity which, through an act of its own will had fallen away from God, its Creator?

It was by reason of a supreme, inexpressible mercy toward His creation on the part of the Master, Who could not bear to see the entire race of mankind – which, He, in creating, had endowed with wondrous gifts – enslaved by the devil and thus destined for eternal suffering and torment.

And the Word became flesh!...in order to make us earthly beings into heavenly ones, in order to make sinners into saints; in order to raise us up from corruption into incorruption, from earth to heaven; from enslavement to sin and the devil – into the glorious freedom of children of God; from death – into immortality, in order to make us sons of God and to seat us together with Him upon the Throne as His royal children.

O, boundless compassion of God! O, inexpressible wisdom of God! O, great wonder, astounding not only the human mind, but the angelic [mind] as well!

Let us glorify God! With the coming of the Son of God in the flesh upon the earth, with His offering Himself up as a sacrifice for the sinful human race, there is given to those who believe the blessing of the Heavenly Father, replacing that curse which had been uttered by God in the beginning; they are adopted and receive the promise of an eternal inheritance of life. To a humanity orphaned by reason of sin, the Heavenly Father returns anew through the mystery of re-birth, that is, through baptism and repentance. People are freed of the tormenting, death-bearing authority of the devil, of the afflictions of sin and of various passions.

Human nature is deified for the sake of the boundless compassion of the Son of God; and its sins are purified; the defiled are sanctified. The ailing are healed. Upon those in dishonour are boundless honour and glory bestowed.

Those in darkness are enlightened by the Divine light of grace and reason.

The human mind is given the rational power of God – we have the mind of Christ (Cor. 2, 16), says the Holy apostle Paul. To the human heart, the heart of Christ is given. The perishable is made immortal. Those naked and wounded by sin and by passions are adorned in Divine glory. Those who hunger and thirst are sated and assuaged by the nourishing and soul-strengthening Word of God and by the most pure Body and Divine Blood of Christ. The inconsolable are consoled. Those ravaged by the devil have been – and continue to be – delivered.

What, then, O, brethren, is required of us in order that we might avail ourselves of all the grace brought unto us from on high by the coming to earth of the Son of God? What is necessary, first of all, is faith in the Son of God, in the Gospel as the salvation-bestowing heavenly teaching; a true repentance of sins and the correction of life and of heart; communion in prayer and in the mysteries [sacraments]; the knowledge and fulfillment of Christ’s commandments. Also necessary are the virtues: Christian humility, alms-giving, continence, purity and chastity, simplicity and goodness of heart.

Let us, then, O brothers and sisters, bring these virtues as a gift to the One Who was born for the sake of our salvation – let us bring them in place of the gold, frankincense and myrrh which the Magi brought Him, as to One Who is King, God, and Man, come to die for us. This, from us, shall be the most-pleasing form of sacrifice to God and to the Infant Jesus Christ.

Translated into English by G. Spruksts, from the Russian text appearing in Chapter 2 of "Solntse Pravdy: O Zhizni i Uchenii Gospoda Nashego, Iisusa Khrista" ["The Sun of Righteousness: On the Life and Teaching of Our Lord, Jesus Christ"], by Protopriest [Saint] Ioann [John] (Sergiev) of Kronstadt, pp. 4-6. English-language translation copyright © 1983, 1996 by The Saint Stefan of Perm' Guild, The Russian Cultural Heritage Society, and the Translator. All rights reserved. Reprinted by permission from "KITEZH: The Journal of the Russian Cultural Heritage Society," Vol. 12, No. 4 (48).