The Holy Innocents Killed by Herod 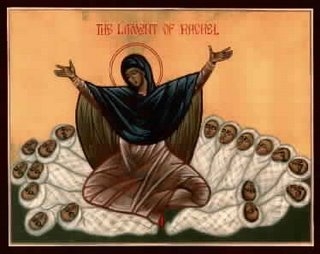 One of the oddities of the Church calendar is that there are certain feasts that are celebrated on one day in the East, but another day in the West. This is the case of the Feast of the Holy Innocents. The West celebrated that feast yesterday, but the East celebrates it today [December 29, according to the Gregorian calendar. Those Orthodox Churches on the Julian calendar commemorate the Holy Innocents on January 11]. Here is what one of our synaxarions says:

The Holy Infants were killed by King Herod in Bethlehem. When the time came for the Incarnation of the Son of God and His Birth of the Most Holy Virgin Mary, Magi in the East beheld a new star in the heavens, foretelling the Nativity of the King of the Jews. They journeyed immediately to Jerusalem to worship the Child, and the star showed them the way. Having worshipped the divine Infant, they did not return to Jerusalem to Herod, as he had ordered them, but being warned by God in a dream, they went back to their country by another way. Herod finally realized that his scheme to find the Child would not be successful, and he ordered that all the male children two years old and younger at Bethlehem and its surroundings be killed. He thought that the divine Infant, Whom he considered a rival, would be among the dead children.

The murdered infants thus became the first martyrs for Christ. The rage of Herod fell also on Simeon the God-Receiver (February 3), who declared before everyone in the Temple that the Messiah had been born. When the holy Elder died, Herod would not give permission for him to be properly buried. On the orders of King Herod, the holy prophet and priest Zachariah was also killed. He was murdered in Jerusalem between the Temple and the altar (Mt. 23:35) because he would not tell the whereabouts of his son John, the future Baptist of the Lord Jesus Christ.

The wrath of God soon fell upon Herod himself: a horrid condition struck him down and he died, eaten by worms while still alive. Before his death, the impious king murdered the chief priests and scribes of the Jews, and also his brother, and his sister and her husband, and also his own wife Mariam, and three of his sons, and seventy men of wisdom who were members of the Sanhedrin. He initiated this bloodbath so that the day of his death would not be one of rejoicing, but one of mourning.

The murder of the rabbis is also confirmed by Jewish sources, it is not simply a Christian myth. In fact, Herod was so paranoid that history records that he killed his brother-in-law, by drowning him, as well as his own sons whom he accused of plotting against him. This is confirmed by multiple records. It is recorded by one later pagan writer that the Emperor Augustus commented that it was better to be one of Herod’s pigs than one of his sons. In other words, there is ample evidence that Herod was the type of person who murdered apparent rivals at a moment’s notice. Or to put it another way, there is no reason to doubt that Herod would have swiftly and perversely ordered the murder of the Holy Innocents. There is no historical reason to doubt that Herod was capable of such a deed, given the other deeds for which there is ample evidence.

But Herod was a relative amateur in comparison to those who perform abortions today. What Herod did, he did in a fit of jealous rage, a jealousy not for a woman but to preserve his kingdom. What the Nazis did far surpassed anything that Herod did. But, what the Nazis did, they did by brute force, like rabid dogs who bit everything about them. But, not such for those who perform abortions. No, they have perfected the art of child murder. Not for them the emotional and livid anger that leads to the destruction of other human beings. Not for them the political and philosophical madness that leads to mass extinction. Not for them such histrionics and theatricality.

Rather, for those who perform abortions today, there is the quiet hiss of the door opening as another woman comes into their parlour. In sterile clinical cleanliness and in hushed tones is yet another human being removed from life. Not for them the cry of anger or of victory, but the hushed tone of clinical pseudo-concern. A Herod is much more understandable for he wished to preserve his rule; a Nazi makes sense in comparison because they wished to bring about the perfect race while wiping out those who supposedly had kept them in financial subjugation, but in reality had not. But those who perform abortions do so in a neutral emotionality that makes their sin all the more horrid. The cold, stainless steel, easy-to-sterilize [or quite disposable] medical instrument is a metaphor for the approach that they use. In just such an efficient fashion can one imagine the executioner approaching his/her charge in order to calm him/her down and prepare the condemned to quietly walk to their final end.

And so, let us remember the Holy Infants today. They were but the most minute beginning of a horrific parade of innocent children who would die in the madness of cold rationality. May they, and all their brethren who have now joined them in the many centuries since Bethlehem, intercede for us before the throne of God Our Father, and of His Son Our Lord Jesus Christ.