Sermon on the Epiphany 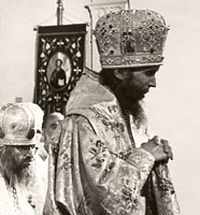 On the feast day of the Theophany, the Baptism of the Lord, every Orthodox Christian would do well to remember another baptism, the one performed over each one of us Orthodox Christians, the baptism in which each of us, through the mouths of our Godparents, gave God an oath that we would always renounce Satan and his works and would always join with, “unite with” Christ.

I repeat, this is especially fitting for this day. Now we will begin the ceremonious rite of the great blessing of the water. Its center, one might say its main part, is the grand prayer in which the Lord is glorified and the grace of the Holy Spirit is invoked upon the water which is being blessed. This prayer begins with the wonderful words: “Great art Thou, O Lord, and wonderful are Thy works, and no word doeth justice to the praise of Thy wonders.” Those who have attended the rite of baptism and listened carefully know that this prayer for the blessing of the water in which a person is to be baptized begins with the same words, and the first part of this prayer is performed in the same way as during the great blessing of the water. Only later, in the last part, does the prayer change at the completion of the Mystery of baptism, which is composed for this Mystery, as a new human soul is to be baptized.

It would be worth remembering the promises made during baptism on behalf of each one of us. When a person is baptized as an adult, which happens these days sometimes but happened much more often in ancient days, he makes these oaths himself, but if he is baptized as a child, his Godfather or Godmother make these promises—they are the “adopters,” as the Church calls them. And these promises, in which the Christian makes a promise to God to renounce Satan and all his works, and joins with, unites with Christ, are not only forgotten by people, but many do not even know about them or that they were spoken, and that they must think about how these promises are to be fulfilled.

What if on the last day of the history of mankind, the Day of Judgment, it turns out that a person made some promises (or that promises were made on his behalf by his Godparents), but he doesn’t know what these promises were? What will happen with such a person? Think, brethren, what it means to renounce Satan and all his works and to unite with Christ.

The time has come when mankind has been consumed with activities which displease God, in which the Enemy of mankind reigns, and, as they said in old days, this Enemy makes everyone dance to his flute. This fuss and bother, which envelops our daily lives, is distasteful to God, and God is absent from it, and the Enemy of God is master and ruler of it. If we gave the promise to renounce Satan and all his works, then we must fulfill it, and try not to crush our souls with daily cares, remembering what the Church teaches: “there is one thing needful,” only one thing necessary—to remember that we must unite ourselves with Christ, that is, not only fulfill His commandments but to try to unite with Him.

Think about this, Christian soul, on this bright and great feast day, think about it and, as you pray that the Lord sends you staunch faith and the decisiveness to fulfill these promises, do not drown in the daily cares of this world and thereby lose your bond with the Lord, with Whom you promised to be united forever.

Today’s holiday is called the Baptism of the Lord, or the Theophany, but those who know the Church rule well know that it is also called “the feast of the holy Theophanies” in the plural.

Why? Because of course, the central commemoration of this feast day is that the choir sang the words “God the Word shone forth in the flesh to the human race.” The Incarnate Son of God, of Whose birth only a few knew at the time, “shone forth to the human race,” for His baptism is as His ceremonial appearance in His service, which He performed until His death and resurrection.

But at the same time, today’s holiday is also noteworthy, as is sung in the troparion, because it is during this very holiday that “the worship of the Trinity was made manifest.” All three Persons of the Holy Trinity for the first time appeared in Their distinctness, which is why this is called “the feast of the holy Theophanies.” People heard the voice of God the Father “This is my Son, the Beloved, with Whom I am well pleased,” the Son of God received baptism from John (meanwhile, we know from the Gospel that John the Baptist, distraught when the Savior of the world came to him, tried to refuse), and the Holy Spirit in the form of a Dove descended from the Father to the Son. In this way, “the worship of the Trinity was made manifest,” and that is why the Church sings this in the troparion, and calls this holiday “the feast of the Theophanies.”

Christ the Savior appeared in order to commence His salvific service. Not long ago, we celebrated another great feast day here, the Nativity of Christ, when we spoke about how the Lord in His birth in a poor cave, condescending to lie in a manger for beasts, emphasized His rejection of any earthly glory or vanity and pomp, for He did not appear in a royal palace or mansion, but amid such humble surroundings. He showed right away that He was bringing to earth a new beginning, the beginning of humility.

Note how He was, in a way, true to Himself, how today, on this great fast day, He also brings humility to us clearly and without a doubt. For where did He go? To Jordan. Why? To receive baptism from John. But sinners were the ones who came to John, confessing their sins and receiving baptism. Yet He was without sin, “untouched by sin,” absolutely free of it and pure, and yet he humbly took his place among the sinners, as though He were in need of cleansing by water. But we know that it was not water that cleansed Him, Most-Holy and sinless, but that He sanctified water by consenting to be washed by it, as we sang today during the blessing of the water: “today the nature of water is sanctified.” So Christ brought to earth the beginning of humility, and was devoted to it throughout His earthly life. But there is more. He also left us the commandment: “Learn of me; for I am meek and lowly in heart: and ye shall find rest unto your souls.”

Here the Most-Blessed Virgin Mary hears from the Archangel the good news that through Her, the Incarnation of God is to be manifested. What does Her most-holy, most-pure and sinless soul say when she comes to visit Her relative Elizabeth in order to share Her joy? She says only: “My Soul magnifies the Lord, and my spirit rejoices in God my Savior.” This humility was the beauty of Her soul. From the account of the Annunciation we know that the Archangel appeared to her at the very moment when She, having read the prophesy of Isaiah about the Incarnation of God from a virgin, did not think to associate this to Herself, but only thought within the depths of Her humility: "How joyous I would be if I were the last of servants of this blessed Virgin,” and suddenly Archangel Gabriel appears before Her with his Annunciation. The Lord beheld Her humility, Who Himself was meek and humble.

He gave us the commandment of humility, in opposition to pride and self-love, which mankind today flounders in.

See how many conflicts we have, even within the church and within our parishes? Because everywhere the stoked passions of human pride cause strife, and if we only had humility, towards which the Lord calls us, we would have none of this.

Let us learn, brethren, from our Savior, Who like the last of sinners went to John in order to be baptized by him, let us learn from this God-loving and aromatic good, without which, as the Holy Fathers said, no other good deed can be performed. Amen.