Sermon by Benjamin T. Peck given at the 2011 Festival of Young Preachers. 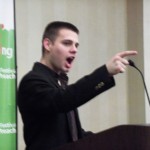 Young Orthodox Preacher Benjamin T. Peck
In the name of the Father and of the Son and of the Holy Spirit. Glory to Jesus Christ!

For He is the one who has given us a gift that cannot be matched by anyone on this Earth, or anything in Heaven. Through His death and resurrection, Christ has given us the power to say the word “no”.

We have all been called here today to speak on behalf of our Lord and Savior, about His commandments to us. Speaking specifically of the 10 Commandments. But what we must ask ourselves today is “why?” Why did God choose these specific ten things to ask of us? Why are these things singled out more than any other laws? We do not ask because we feel the need to second guess our Lord, or doubt His laws. Far from it in fact. But instead it is to understand the Law of the land, for we all know that to understand is to have knowledge and to have knowledge is to have power. And to truly preach the Gospel, we must have that knowledge. We must know the rhyme to His divine reason in order to achieve the one thing we are to have passion for; to be like Jesus Christ and be free of the world, free of the passions, and just free in general.

Our sins are like a maelstrom; one sin, one fault sends us into that maelstrom without a raft, and the longer we stay in that storm the harder it is to get out. It’s like trying to swim in a hurricane, which no one here has done because if you had swam in a hurricane you would probably be dead.

We know that to tell one lie begets a second, which begets a third and a fourth to cover the first lies. Eventually we are caught in that storm of sin because we’d rather lie to a friend’s face than merely tell them the truth. But lying isn’t so bad right? It can help a friend feel better because of a little white lie, it can get you out of trouble with you parents. I believe I can safely say that we’ve all been in the position where our parents discovered our lie, came to us and said “if you had told us the truth first, your punishment would not have been as severe as it is now.” God, is that parent. He is our Father coming to us saying “why did you not tell me first? Because now I have to punish you not only for the first offense, but for the lie as well.”

And brethren, this doesn’t just apply to lying. Even if you have remained abstinent to this day we all know that sex is supposed to feel really good. Sometimes so good it becomes addicting. Some of us, myself included, probably know someone who is addicted to their lust, and that lust burns the wings of the angels to dust. These people fall under a guise of “personal freedom”, but they are not free. Rather they are slaves to their passions! Slaves! And right now they are the kind of slaves that have been tricked by their masters into thinking “it’s not so bad, being a slave.”

When Jesus said “if a man slaps you, turn your cheek so he may slap the other side,” He was not telling us to let the world walk all over us in attitudes of pacifism. He was not telling us not to defend our family and friends if they are in harms way. The modern context of what He said that day is “if a stranger replies to you with ‘your mom’ don’t punch him in the face for it!” God doesn’t want us to rise, or rather lower, ourselves to petty anger because to do so is to not only become slaves to our passion, but now we are slaves to the passion of the one who insulted us. Which is harder to do? To meet the insults of the stranger, or to simply walk away? We know the it is the latter, because it is easier to succumb to our passions.

St. Isaac the Syrian wrote “Death to the World!” Not because we as Christians are called to homicidal tendencies about the world, but because the world is a representation of our passions. The world is a thorn in our side that we must continually try and yank from our flesh. So when we say “Death to the World” we are saying death to passion, death to sin! So that one day we may say death to death itself, for we shall live forever. As we live, our sins and passions are like diamonds; they sparkle, they’re pretty. They feel nice when we’re surrounded by them. But one day those diamonds will lose all of their luster, and they will split the sky in half! Imagine that, one lie, capable of tearing the sky apart.

Yes, it’s hard. It’s hard to resist those diamonds, but we know it can be done. Because it has been done time and time again before us. The Saints and Martyrs of Christianity were men and women and CHILDREN who were tortured, cut, burned and mercilessly executed all for believing in Christ. They died because they said “yes” to God, and “no” to the world. These were sometimes children who were no older than 16 years old, who had such incredible strength in Christ, that they went through the most gruesome torture imaginable.

So now, I ask that you compare the pain of telling the truth, compare your sexual attention your irritation with those who insult you, to the pain suffered by the Saints. Compare your passions to the torture suffered at the hands of those who were so faithful, they said “Kill me, because I will never renounce Christ.” Suddenly saying “no” isn’t that hard, is it?

This does not mean that God is a childish masochist who enjoys watching us suffer and die. It means that God looks upon us always, and when He sees us die for Him; when we take that bullet for Christ, He knows that we have made ourselves free of the world and of our passions. He sees us saying “yes” to him and “no” to the world. He sees that dying on the cross was not in vain.

And why did He choose to die? For the One who created everything, every tiny detail of our universe, it would have been so easy to just snap His fingers and make everything right again. Make it possible for us to enter the gates of Heaven once more. Instead He chose to become flesh and blood, be tortured, spat on and humiliated, and then ultimately killed in the most brutal way the Romans could conjure. The crosses we bear on our necks, at one time, were symbols of pain, torture and hopelessness. And Christ has made this now an avatar of hope, freedom and love. He has made this our key to the iron shackles that we bear as our sins. When He died for our sins, He created a key to relieve us from our bondage.

We have all seen and heard the story of A Christmas Carol, and we know the scene where Jacob Marley comes to Scrooge and says “these are my passions in life! My lust, my greed, my anger and my lack of love. Now they are iron chains that I must bear for all eternity, and I have no escape.” Brethren, we are like Scrooge. We are still alive, and are chains are still invisible to us. We still have the chance, the choice to escape those chains. Christ gave us the key, now all we have to do is use it.

The only thing we have to do is use the key that Christ has put in our hands and said “this is my gift to you!” And we will sit on thrones in Heaven next to God, Christ, the saints and even the angels.

In all you do, remember the end of your life and you shall never sin ~ Sirach 7:36.

That is our parted Red Sea to freedom. Our Savior has already made the wet land dry and made the path clear, now all we have to do is step onto it.