Abbess Barbara of Pukhtitsa Convent Reposes in the Lord 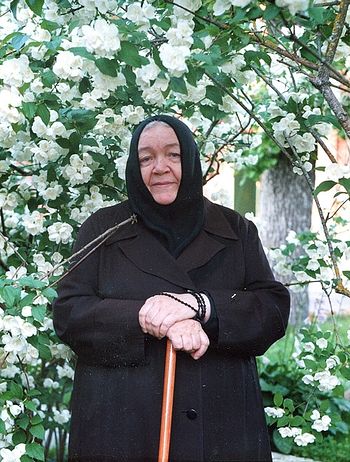 It can be said without exaggeration that Mother Barbara personified a whole epoch in the existence of Russian women's monasticism, and monasticism in general. She labored in monasticism for fifty years, forty-three of which she served as the abbess of Piukhtitsa Monastery in Estonia. When monasteries were being re-opened in various dioceses of the Russian Orthodox Church, the majority of the new abbesses came from Piukhtitsa Convent, which was never closed during the soviet period. Under Matushka Barbara, Piukhtitsa became a unique "smithy of monastic personnel," a capital city of women's monasticism. But mainly, here one could feel true Christian love, kindness, hospitality, and spiritual nobility, combined with deep monastic work.

Abbess Barbara had been ailing for a long time and was able to move around only with difficulty; however, she never ceased her tireless labor of governing the monastery. Several months before her death, she was tonsured in the great Schema with the same name. Her authority among the sisters was enormous, and her maternal love for all was boundless. In August of last year, Matushka marked her eightieth birthday. Patriarch Kirill awarded her in honor of that date with the medal of St. Euphrosyne of Moscow, first degree. Sretensky Monastery congratulated Mother Barbara, saying, "For many of the children of the Russian Orthodox Church, you are a true example of self-sacrificing love for God and people, an example of unwavering following of the commandments of Christ, and an example of spiritual progress."

The monks of Sretensky Monastery visited Piukhtita Convent many times, and were invariably greeted with great warmth, vouchsafed conversations with Matushka Barbara, and received important spiritual advice. The natural continuation of this spiritual friendship was the album entitled, Piukhtitsa, the Holy Mountain, published by the Sretensky Monastery publishing house in 2006. It contains information on the monastery's historical background, the recollections of His Holiness Patriarch Alexy II, who was very active in the convent's modern-day development, recollections of the sisters, and a vast array of photographs.

In her own recollections, Mother Barbara related how Patriarch Alexy I persuaded her to accepted the obedience of abbess of Piukhtitsa Convent, despite her protests and doubts. "I came here neither dead nor alive. [I thought,] what am I going to do? How shall I do it? Where should I begin?..."

Gradually, through Mother Barbara's wise governance, Piukhtitsa Convent was transformed, and became a true stronghold of Orthodoxy in the Estonian land. Every day, hundreds of Estonians and pilgrims from all over the world come here, and for many tourists their visit becomes a turning point in their lives; they receive holy Baptism and begin to lead a Christian life. Abbess Barbara enjoyed great authority not only among the pilgrims, but also with the civil and governmental authorities—each considered it a great fortune to have had a chance to talk with her and receive her blessing.

The abbot of Sretensky Monastery, Archimandrite Tikhon, and brothers, express their deepest condolences to the sisters of Piukhtitsa Convent. This heavy and irreplaceable loss can be lightened only through our faith in eternal life, and our hope in the prayers of our dearly beloved Matushka Barbara in the Kingdom of Heaven. May her memory be eternal!

Abbess Barbara (in the world, Valentina Alexeyevna Trofimova) was born on August 17, 1930, in the town of Chudovo, Novgorod Province, to a pious family, where she received a deeply Orthodox upbringing. At the onset of World War II, her family evacuated to the town of Luga, Leningrad Province. There, Valentina received her high school education, and sang and read in the Kazan Church. After graduating from accounting school, she worked in her field.

But the young girl's heart yearned for another life, and in 1952, her desire was fulfilled: she became a novice in the Convent of the Mother of God—in the Piukhtitsa Dormition Convent. In 1955, Valentina Trofimova continued her obedience in the Vilnius Convent of St. Mary Magdalene, under the leadership of the experienced eldress and abbess, Nina (Batasheva) (later Schema-Abbess Barbara), seven of whose wards—including Valentina—later became abbesses. On March 5, 1958, Ryassafore Nun Valentina Trofimova received the tonsure into the mantia, with the name Barbara.

Nun Barbara's obedience was in the chancery conducting correspondence, as the assistant to the treasurer, and as an assistant in the restoration and construction work at the Vilnius St. Mary Magdalene Convent.

On January 3, 1968, by order of His Holiness Patriarch Alexy I (Simansky) of Moscow and All Russia, Nun Barbara (Trofimova) was appointed Mother Superior of the Piukhtitsa Convent. On January 18, the eve of the feast of Theophany, Archbishop Alexy (Ridiger; later Patriarch of Moscow and All Russia) raised Nun Barbara to the rank of Abbess in the Tallinn St. Alexander Nevsky Cathedral, and on the next day, January 19, entrusted her with the abbess's staff in Piukhtitsa Convent. In the Holy Trinity-St. Sergius Lavra, His Holiness Patriarch Alexy I placed upon her the pectoral cross.

The new abbess became the third "builder" of the convent. During the forty-two years of her leadership, the monastery was transformed to the point of being unrecognizable. With Mother Barbara's arrival, a comprehensive building project began. In the monastery were built an electric mill, new living quarters, and stone utility structures. All the monastery churches were restored, the cupolas and crosses gilded, and the wall paintings of Dormition Cathedral were renovated. A guesthouse was set up for pilgrims on the monastery grounds, a structure was built near the holy spring for bathers, and a chapel dedicated to Great Martyr George was built on the monastery farm.

Also in 1990, the status of Piukhtitsa monastery changed completely: it received the title of a stavropegic monastery; that is, it went directly under the administrative rule of the Patriarch, Alexy II [rather than that of the local diocesan bishop].