Why Buy the Cow When You Get the Milk for Free?

The love of husband and wife is the force that welds society together
St. John Chrysostom

"In the current environment, where we are witnessing the collapse of the family, I have encountered many cases of possessed people who, in addition to other sins, were living in irregular marriages" (Fr. Gabriel Amorth, An Exorcist Tells His Story.) 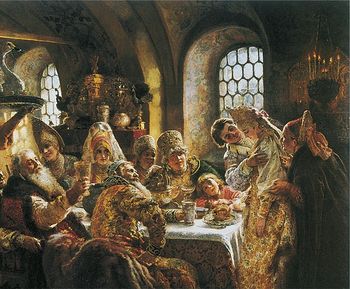 Boyar wedding feast in the 17the century. Constantine Makovsky, 1883.
One of the most visible signs of the "anti-Christian" and "anti-faith" shift in society has been the widespread acceptance of the practice of men and women living together without the benefit of marriage. Thirty or forty years ago this practice was known by a variety of terms ranging from the elegant, "common law marriage," to the less than elegant term, "shacking up." The people who did this sort of thing usually lived on the wrong side of town and their lack of matrimonial status was spoken about in hushed tones.

Today, we have become liberated from such antique attitudes, or at least we have bought into the delusion that we are liberated. Living together in imitation of marriage has become so common and so accepted that it no longer raises any eyebrows, even among many Orthodox Christians.

The couples that practice imitation marriage are now encountered in every social position, not just the lower ones. In addition, family and friends no longer shun them. Their living arrangements are accepted by their families and, in some cases, even by their churches.

Many circumstances motivate these "imitation marriages." Some couples feel that living together will allow them to see if the deeper commitment of marriage is in order. If not, they can simply "break-up" without a divorce. Statistics surprisingly show that the marriages of people who have first lived together are more likely to break-up than those who haven't. Anyone who has been married for any length of time can understand this - living together is simply a prolonged date. When the marriage commitment occurs, the date ends and something new must take its place.

Some couples feel that "as long as we are in love," the "formal" commitment of marriage is simply optional. After all, "God is love." This sort of thinking confuses love with lust. The words of St. John in his First Letter, "God is love" (I John 4:8), must be read in the context of the following verse:

"Herein is love, not that we loved God, but that He loved us, and sent His Son to be the propitiation for our sins. Beloved, if God so loved us, we ought also to love one another" (I John 4:10-11).

God is love, not lust. Love demands sacrifice; lust demands only satisfaction. St. John instructs us that our love for each other, including our natural sexual desire, must be based on a love that sacrifices, not one that is sacrificed to.

Couples who live together, precisely because they lack the commitment of marriage and its demands for the sacrifice of the self to the other, can never achieve the love that is found in marriage. This is why the Epistle reading at the Orthodox wedding service, drawn from chapter five of St. Paul's letter to the Ephesians, emphasizes that marital love is the icon of the sacrificial love between Christ and His Bridge, the Church:

"Husbands, love your wives, even as Christ also loved the Church, and gave Himself for it; That He might sanctify and cleanse it with the washing of water by the word, That He might present it to Himself a glorious Church, not having spot, or wrinkle, or any such thing; but that it should be holy and without blemish"(Ephesians 5:25-27).

Through the Incarnation, God took the absolute risk that mankind, the future Church, would accept His Only-Beloved Son as Her Bridegroom. Those who marry take the risk that their marriage may fail. This fear of failure is what keeps many couples that live together from getting married. This fear can only be overcome by a renewal of faith and the acceptance of Christ as the Lord and Saviour of both their bodies and souls and their marriage.

For the salvation of those who may currently be living together it must be plainly stated: couples who live together without marriage, even though they may have the intention of marriage, are living in a state of serious sin. The only remedy for this sin is either marriage in the Church or a termination of the relationship.

Apart from any social concerns, couples that live together diminish each other's spiritual dimension. It is ultimately an arrangement of convenience that is entered into in order to satisfy their lust and loneliness, covering itself with the names of love and companionship. It rarely leads to happiness. More often it leads to bitterness when the "party is over" and each person realizes that they have given away something very precious, their sexual self, so cheaply to someone else.

There is no love without sacrifice. If you are in such a relationship, seek to resolve it so that you might give "the good answer at the fearful judgement seat of Christ." Seek the counsel of your pastor and family members. Remember the words of our Lord: "For what is a man profited, if he shall gain the whole world, and lose his own soul?" (Matt.16:26). If someone in your family is in such a relationship, speak to them in love for the sake of their soul and yours.

The Biblical story of Tobias, found in the Book of Tobit, relates an understanding of the true nature of marital love. In the narrative, Tobias betroths himself to a girl named Sarah, who has had seven husbands. The book relates how each of these husbands, in turn, was slain by the demon of lust, Asmodeus, on their wedding night.

However, unlike the other bridegrooms, Tobias, first burns incense to God, driving off the demon of lust, and with his bride begins his wedding night with prayer:

"...And now O Lord I am not taking this sister of mine out of lust, but with sincerity. Grant that I may find mercy and grow old together with her. And she said with him, 'Amen'" (Tobit 8:7).

Officical site of the American Carpatho-Russian Orthodox Diocese of the U.S.A.