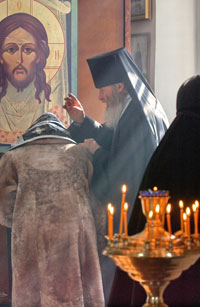 Tomorrow is Monday. Not just any Monday, but Clean Monday, the first day of Clean Week, the beginning of Great Lent, a time of particular prayer and fasting. Great Lent will take us on a journey through forty days, or six weeks, to Lazarus Saturday, Palm Sunday and then Holy Week. At the end of that Week, God willing, we will celebrate the Resurrection of Christ on Easter Night. For we are now fifty days exactly from Easter Day.

This Sunday is known as Forgiveness Sunday, and also Cheesfare Sunday for it is the last day on which we may eat dairy produce. On it we remember the Fall of Adam and Eve and how they lost Paradise by eating 'the forbidden fruit', which is why we fast, eating only 'the permitted fruit'. How exactly did that Fall happen?

We know from the Scriptures that the first man and the first woman lived in Paradise, in Eden. We know also that they walked with God, meaning that they lived in harmony and communion with God, suffering neither sin, nor sorrow, neither aging, nor death.

We know also that they disobeyed God. The cause of their disobedience was in the temptation of pride: they thought that they knew better than their Maker. Creation, given freedom, thought that it was greater than the Creator. The fact that the first man and first woman preferred to trust in themselves, rather than in God, to trust in their proud self-importance, led to their fall from communion with God. But once they had rejected God, they also rejected freedom from sin and its result, sorrow, and freedom from aging and its result, death.

The cure for their Fall was made clear to them; it was in doing the opposite of all they had done. Instead of disobedience, they needed obedience; instead of pride, they needed humility. In other words they had to turn back on what they had done in repentance and ask forgiveness. At first they had been unable to do this. When God had first spoken to Adam and Eve after their act of disobedience, Adam had blamed Eve, and Eve had blamed the serpent. Neither had had the humility to take responsibility for his errors and ask for forgiveness. It was not that God did not know what they had done; it was simply that He wanted to give them the opportunity to ask Him, and to ask each other, for forgiveness. Instead they blamed each other and in the process blamed God their Maker. We can hear the Devil laughing.

To us, as children of Adam and Eve, God also gives opportunities to ask for forgiveness, as Adam and Eve should have done. He gives us the sacrament of Confession. Confession does not exist because God wants to know what we have done or left undone. He already knows that. Confession exists because God is giving us an opportunity to own up to our mistakes and failings. He wants us to ask for forgiveness, so that we can then take strength from Him through the prayers of the priest, so as to clean ourselves and strive not to repeat our mistakes.

God does not need our confession, but we do.

Every confession is a repeat, in the New Eden of the Church, of that opportunity given to Adam and Eve in Eden, to ask God for forgiveness.

Unlike human-beings, God always forgives those who sincerely, with repentance, ask Him for forgiveness.

And just at this time, on Forgiveness Sunday and all during Clean Week, it is the custom of Orthodox throughout the world to come to Confession, to ask God for forgiveness, preparing ourselves for Communion next Sunday. First, therefore, we must ask each other for forgiveness. We can ask forgiveness of those who are not here by visiting them or telephoning them. But of those who are here, we can now ask forgiveness directly, for all our errors towards them in thought, word or deed, whether conscious or unconscious.

Forgive me, brothers and sisters.