The Goal of Earthly Life: Prayer 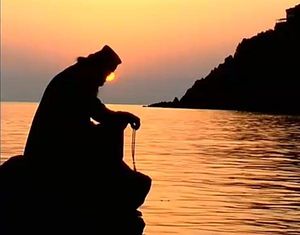 He came to me with the question, "I do not pray very much lately. I think I'm falling into negligence. What should I do to bring my prayer back?"

If you truly want to bring your prayer back, then you are able to do this in an instant. Through prayer you acquire prayer. Prayer is an act of will. Pray regularly. A little or a lot? It doesn't matter. With feeling or without feeling? That doesn't matter either. You begin with the body, with words and motions. What's important is that you do it attentively. Don't be hasty and don't be slow. Don't raise your voice and don't hush it. Be moderate. Put your mind on what you are saying, on each word. Understand what you are saying. Whenever your mind wanders, even a little bit, bring yourself back. Prayer with the body, with the tongue, the hand, the fingers, bending the body in bows and prostrations, keeping attention and understanding the meanings, all of this and similar things, is the introduction to the prayer of the heart. In prayer, the motion is from the outside towards the inside, and upwards. Prayer through control of the body enters one into tranquility. Tranquility enters him into humility, and humility raises up within him the fragrance of peace. Everything else follows after this.

Prayer is not an issue of temperament. This is why it only comes by force. A person forces himself, and it is given to him. Indeed, it is given to him as a gift from above! Likewise, if one waits to be overcome with a desire for prayer in order to pray, then he will never pray. Prayer with desire is in general psychological prayer with no spiritual value. The basic desire for prayer, or you could say spontaneous prayer, only comes with strength and grace from the Most High. The beginning of prayer is not like this. Zeal for prayer might arise in the soul after encountering a person praying or after hearing or reading words about prayer that move the heart, and then when he begins to pray his interest quickly ceases and he finds prayer monotonous and dry. If he goes back, he loses it and if he stays firm and constant then he arrives at true prayer that spreads its roots in his soul, little by little, until it reaches its depths!

Usually the Lord God comforts one who prays at the beginning of the path, in order for him to stay firm. However, the comfort does not come when watched. You do not know when it will come to you. Pay attention that you do not wander off into imagination. Do not make room for images and feelings to slander you. That will lead you astray! Just the opposite, once you become familiar with prayer, beware of fantasies, images, and feelings because in that is a departure from prayer. Likewise be careful about sentimentality and mental laxity. Prayer is something calm and firm! Standing before God in prayer is something very serious. Naturally, God is not harsh, but He is not indulgent either. Prayer has its own special characteristics. Its joy is tranquil and its peace is alert. Its solace is mixed with thanks, a sense of unworthiness, and repentance.
Prayer connects you to God, to the Holy Trinity, to the Father, Son, and Holy Spirit. Prayer is God's language to man so that he will rise up to Him and enter into a relationship with Him. Thus, Prayer teaches prayer and what comes before in it leads you to what comes after, just as the number one leads you to the number two and on to three and so forth. You do not needs techniques in prayer. It comes to you of itself when you insist on standing in the presence of God and when your Lord gives you what you ask. God seeks communion and calls you to Him and when you take a step in His direction, He leads you to Him, just as a father takes the hand of his child or a guide walks ahead of a traveler. Nothing is closer to the human heart than prayer. Man is put together to be a being of prayer. At the deepest level, man realizes his humanity in which God created him in prayer. Why does the heart not incline to it spontaneously from the very beginning? Because the passions of the soul and the body have murdered man's heart and taken control of it. For this very reason at the beginning a person needs to force himself to prayer, and then his heart will welcome it and take joy in it because it matches what is deeply rooted in him, even if it was hidden at first.

So prayer is the greatest gift to man, not only because it connects man to God, but because it is also the need and the solution for all things that man faces. People imagine that their problems and worries can be solved on the horizontal level, through human capacities. No doubt something of this is necessary, but everything without exception, all the cares and difficulties should first be faced with prayer, that is on the vertical level, by casting them at the feet of Jesus. It is no surprise that the Lord said, "Come to me all who are burdened and heavy-laden and I will give you rest." Our rational solutions and initiatives are not always correct, but the Lord God knows exactly what we need. This is why through prayer, through putting the matter in God's hands, through giving oneself and one's concerns over, one finds the appropriate solution to all one's problems!

However, if you correctly practice prayer, it draws you to the divine commandments, to repentance, to faith, to gentleness, and especially to love. Then if you practice the divine commandments, God's presence will become deeper in your life and the commandments will then nourish your prayer and press you on to prayer. But if you disregard the commandments, then prayer will quickly wither. If the commandments cause the relationship with God to grow, then prayer does too. For this reason, the commandments and prayer support each other so that the faithful will grow and attain the fullness of stature of Christ, love. This support is also accompanied. One prays and one works. One strives to lift his heart upwards at every moment and in every occasion. This is with regard to ordinary believers. But there are those for whom prayer becomes their work. Such people reach the end of prayer and the goal of work at the same time!

The truth is that prayer invites prayer. As long as one is engrossed in prayer, as long as one makes a habit of it, it rules his heart. At the end of the day, it is not as prayer that it satisfies man's being. The way is open for man to drink from prayer as much as he wants. Prayer is the goal of man's path on earth. A person who does not pray and who does not lift his heart and his mind upwards remains just the outline of a person, no matter what he has accomplished! "What use is it for a man if he has gained the whole world but lost his soul?"