Pray for the Reposed! 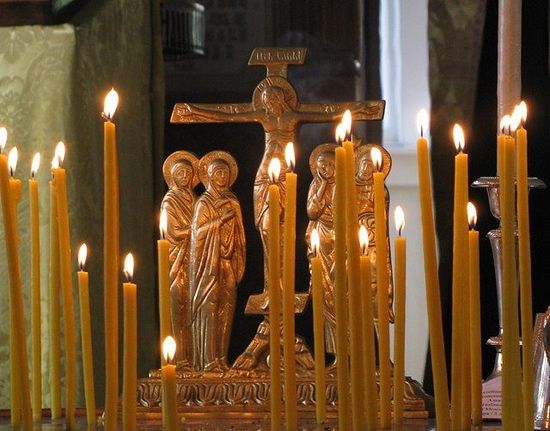 The death of people who are close and dear to us is one of the most difficult trials sent to us by the Lord God during this temporary life. There are no tears more bitter than the tears of a mother for the beloved child of her heart who goes to the grave before his time. What sorrow can we compare to the sorrow of widows and orphans? Nonetheless, our Lord and Saviour turns to these people, the most unfortunate ones in the eyes of the world, saying respectfully, "Do not weep!" The Apostle Paul commands these sorrowing ones, saying, "Do not sorrow!"

What does all this mean? Of course, it does not mean that we should forget those dear loved ones of ours who have departed, that we should cast them out of our hearts. No. We should love them after their death just as we loved them in life. However, we should not sorrow over their death. Death does not separate us who are Christians from communion in love with those who are dear to us. The Lord Himself has given us the very grace-filled means needed to have communion with them. The first among these means is prayer. Prayer is the best means for spiritual communion among people who are still alive. The Apostle Paul beseeched the believers to pray continually for him in order that the Lord would grant him strength and power to preach. Likewise, St. Paul prayed for others that the Lord would confirm them in the Faith and in a Christian life. There is no doubt that the prayers of believers strengthened the Apostle and that his prayers strengthened them.

We find an amazing example of the power and action of mutual prayer in the Acts of the Apostles. While St. Peter was in prison sleeping between two guards, prayer was made without ceasing of the Church unto God for him (Acts 12:5). What was the result of this prayer? During that very night, the Angel of the Lord appeared in the prison, awoke the sleeping Apostle, and led him out of prison.

The power and action of prayer for the souls of the departed is even greater than prayer for the living. There is no greater comfort than prayer and no greater joy than joy in the Lord for those who are separated from their bodies. It is unjust, as some think, to assume that the needs of our departed brethren are unknown to us. However, this is not true. The spiritual needs of the dead are the same as the spiritual needs of the living. The dead need the mercy and goodness of the Heavenly Father, forgiveness and remission of sins, grace-filled help from God in the fulfillment of all good desires, and the peace and ease of the heart and conscience. These things are most important both for the living and the dead. Give rest, O Lord, to the souls of Thy departed servants is the continual prayer and best intention of our Mother Church for the souls of Her departed. We should also beseech the Lord with this intention for the departed souls of our own loved ones.

Perhaps, having confessed at the hour of death, some soul did so quickly, in a confused manner. This soul might have forgotten something because of troubled feelings, and he now grieves over this. Perhaps, this soul did not have time to offer God true repentance, to fully cleanse his sins by tears of compunction. Perhaps, the awareness of unconfessed and unforgiven sins tear and torture this soul. Pray for this soul who is suffering. Pray that the Lord God might comfort him with the protection of His inextinguishable mercy Pray that this soul might receive, albeit at this late hour, remission of sins because of his sincere remorse.

Who can enumerate all those bonds with which our soul might bind itself in this lifetime and by which it might remain bound for eternity. One might have been envious of his neighbor in the depths of ones soul and bound himself thus. Another person might have mocked the weakness of His neighbor and become according to the words of the Lord, worthy of Hell. Another person might have lied and as a result became the son of the father of lies. If Thou shouldest mark iniquities, O Lord, O Lord, who shall stand? Therefore, no matter how holy a man's life might be, no one can be sure that he will pass into the next world completely reconciled with God. No man can say that the prayerful intercessions of those brethren who are left alive are unnecessary for him.

Was not the repentance of St. Ephraim the Syrian sincere and deep? Even he, sensing that his end was near, besought his brethren, "O Brothers, accompany me into the world above with prayers, psalms, and offerings. Remember me on the fortieth day after my death; because prayers and offerings made by the living help the departed."

Works of charity are another means of communion with the departed. "If you desire to honor the dead, offer a gift for him. Honor him by good works, charitable offerings, and services" (St. John Chrysostom). Send gifts for the reposed through the hands of the poor and the hopeless. In the name of the reposed, do acts of charity to the best of your ability and be assured that your gift will be received by God. Our Lord Jesus Christ has assures us that our gifts will be received, saying, In as much as ye have done it unto one of the least of these My brethren, ye have done it unto Me (Matt. 25:40). Can it be that He Who is all-powerful will remain in debt to us? If you give food and drink to the hungry and the thirsty in His name, then the Lord will fill the soul of your departed brother with the appearance of His light-bearing and joy-filling Image.

It could be that the soul of your relative is ashamed before the holy angels because of his lack of good deeds and because of his wretched sins, and he hides in darkness and in murky depths from the face of God. Clothe the naked; wash the feet of the tired; receive and give rest to the traveler in the name of such a soul; and the merciful Lord will vest this soul in the Garment of His Mercy, will adorn it in the Robe of His justification, will wash its sinful filth in His Most Precious Blood...

It could be that the soul of your friend bound by sins languishes in a dungeon without the vision of God's face. Hurry to a prison and assuage the heart of a suffering prisoner in the name of your departed friend. The Lord will send His bright angels to comfort the soul of your sorrowing friend, to strengthen him with hope, and make him rejoice in the promise of God's mercy.

It could be that a soul has left this world for the spiritual world without having drawn close to the holy inhabitants of that world through prayer; he may have appeared in that higher sphere as one entering a strange and unfamiliar land and may not find any spiritual 'relative' in this upper Sion. Take in the stranger; give rest to the beggar; give him a place to rest his head, and the Lord will grant the soul, for whom you do this, one of the bright dwellings in His Father's mansion. The souls of the righteous will receive this soul in bright and joyful communion. St. John Chrysostom says, "If we desire to relieve the sufferings of a sinner, let us do acts of mercy in his name. Though he be unworthy, the Lord will comfort and pity him."

When we pray for the reposed and do charitable works in their name, it is necessary, Brethren, to reflect on our own death while there is still time. We should prepare now so that we will not pass into the future life of torture bound by bonds of sin. No matter how short or how long the Lord has determined that we will live on earth, there is no doubt that our entire present life is a road leading to death and to the threshold of eternity There is nothing better or of more value for us to acquire than a peaceful, blameless, repentant, and Christian end to our life. He who has lived piously will repose piously. He who has lived with the Lord will die with the Lord. He who zealously serves the Lord before death will be with the Lord after his repose. Where I am, there shall also My servant be. For if we believe that Jesus died and rose again, even so them also which sleep in Jesus will God bring with Him.