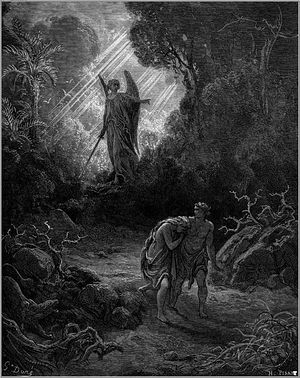 Martin Heidegger, the German philosopher, characterized the human situation in terms of “being thrown into the world”. Thrown into the world, literally headfirst, we eventually crawl to our feet, and begin to ask, “Where in the world are we? What time is it?” We spend the rest of our lives trying to find out. Our answers to those questions are to be found in the season of Great Lent. Cheesefare Sunday, the last preparatory Sunday before the start of Lent, recalls Adam’s Expulsion from Paradise, “Therefore the Lord God sent him forth from the garden of Eden, to till the ground from which he was taken. He drove out the man; and at the east of the garden of Eden, he placed the cherubim, and a flaming sword which turned every way, to guard the way to the tree of life” (Genesis 3:23-24).

We are just outside of Eden, but on this side of Pascha. Bishop Kallistos observes, “Lent is a time when we weep with Adam and Eve before the closed gates of Eden, repenting with them for the sins that have deprived us our free communion with God. But Lent is also a time when we are preparing to celebrate the saving event of Christ’s death and rising, which has reopened Paradise to us once more (Luke 23:43).” But we would not know it if someone had not told us. We are just outside of Eden. We have been driven out. We are not sitting in paradise. Outside of Eden everyone is confused; people are struggling to survive, just hanging on. But Eden has left its mark on our memory. We live and work somewhere in a field of thorns and thistles, somewhere between paradise lost and paradise regained. That is why we are not satisfied where we are. To borrow from St. Augustine, our hearts are restless. There is no place between the Greek Isles and West St. Paul that will ever be fully satisfying. That is why we hunger not only for bread, but for absolute meaning. That is why we long not only for a few slices of life, but for the whole loaf of its fulfilling meaning. That is why we look beyond our immediate world and call out to the mystery we cannot see; and call it “God.”

We cannot go back to Eden. The gate is guarded by a flaming sword. We cannot go back; we must go forward. We cannot hope to regain a paradise for ourselves anywhere just outside of Eden. Lent is a time tense with contradictions. So full of sadness, so full of joy; so close to hell, so close to heaven; the cross is not far from the empty tomb. Those who are bent low in pain and suffering will leap with the joy of Pascha. Lent gives us a glimpse of the future that the resurrection of Christ brings, a foretaste of joy and victory, and an eternal celebration of redeemed life, that gives unconquerable hope in the midst of the dark ages—that gives hope that God can take what is weak, and broken and good for nothing, that God can take the crucified, the outcast and the damned, and make us all free and alive.

At a rally sponsored by the Communist Party in the old Soviet Union, the speaker eloquently extolled the virtues of communism, pronounced the death of God and debunked the myths on which the Christian faith is based. After his hour long presentation, the speaker invited the village priest to make a five-minute rebuttal. The priest, a very simple man, came forward. He said that he did not need five minutes. He turned to the assembly and said: “Brothers and sisters, Christ is risen!” The villagers responded with the words of the Paschal greeting, “Indeed He is risen!”

It was outside the gate of Eden that the hope of humanity was put to death, nailed to a cross, then placed in a grave. It was amidst the dead and discarded heap of humanity that a new and true and finally fulfilling hope for all of humanity and the world was born from the grave. St. Ephrem The Syrian said of Christ, “Blessed is he who was pierced and so removed the sword from the entry of paradise.” We can, therefore, thumb our nose at the evil that runs riot in the land, to make a mocking attitude toward sin, death, and hell and all the demons of damnation that our souls and bodies sick, that still subject our world to suffering. As we begin Lent we are straining forward to hear the glorious exclamation, “Christ is risen.”

A Lenten Primer
Fr. Evan Armatas, John Maddox
How did the Church arrive at such a season and structure of services? And whether you've been through Lent before or this is going to be your first season, you will see that this is a rather complicated season; there is a lot going on, a number of services you haven't seen. There are new names and phrases for things. Certain spiritual disciplines are highlighted that you may not be aware of, or at least you don't typically them see during the rest of the season.
Comments
×