In Memory of the Forty Martyrs of Sebaste—A.D. 320 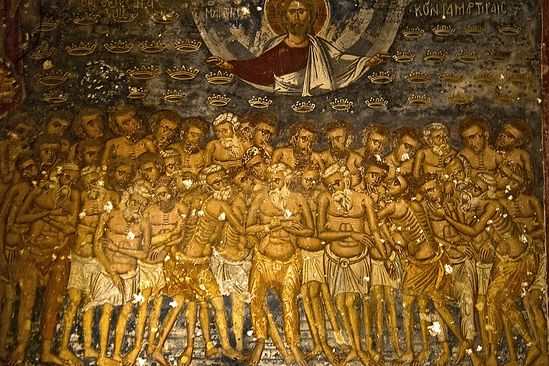 Icon of the Holy Forty Martyrs of Sebaste

When the pagan Licinius ruled the eastern half of the Roman Empire (307-323 AD), it was his evil intent to eliminate Christianity from the lands under his control, and especially, for fear of treason, among the troops. One of his supporters was a cruel man by the name of Agricola who commanded the forces in the Armenian town of Sebaste, in what is now eastern Turkey. Among his soldiers were forty devout Christians who wielded equally well the sword of battle and the sword of the spirit, which is the word of God (Eph. 6:17). These men formed an elite bodyguard. When it came to Agricola's attention that they were Christians, he determined to force them to renounce their' faith and bow down to the pagan gods. He gave them two alternatives:

"Either offer sacrifice to the gods and earn great honors, or, in the event of your disobedience, be stripped of your military rank and fall into disgrace."

The soldiers were thrown into jail to think this over. That night they strengthened themselves singing psalms and praying. At midnight they were filled with holy fear upon hearing the voice of the Lord: "Good is the beginning of your resolve, but he who endures to the end will be saved" (Matt. 10:22 ).

The next morning Agrricola summoned them once again. This time he tried to persuade them by flattering words, praising their valor and their handsomeness. When the soldiers remained unmoved, they were again thrown into prison for a week to await the arrival of Licius, a prince of some authority.

During this time they prepared themselves for the trial of martyrdom. One of them, Cyrion by name, exhorted his fellow soldiers:

"God so ordained that we made friends with each other in this temporary life; let us try not to separate even in eternity; just as we have been found plea sing to a mortal king, so let us strive to be worthy of the favor of the immortal King, Christ our God."

Cyrion reminded his comrades in arms how God had miraculously helped them in time of battle and assured them that He would not forsake them now in their battle against the invisible enemy. When Licius arrived, the soldiers marched to the interrogation singing the psalm, "O God, in Thy name save me" (Ps. 53), as they always did when entering upon the field of contest.

Licius repeated Agricola's arguments of persuasion, alternating between threats and flattery. When he saw that words were of no avail, he ordered the soldiers sent to jail while he thought up a form of torture sure to change their minds.

After prayers that night, for a second time the soldiers heard the voice of the Lord:

"He who believes in Me, though he die, yet shall he live. Be bold and have no fear of short-lived torment which soon passes; endure...that you may receive crowns."

The next day the soldiers were led to a lake. It was winter and a frosty wind was blowing. The soldiers were stripped of their clothes and ordered to stand through the night in the freezing waters. A guard was set to watch over them. In order to tempt the holy warriors of Christ, warm baths were set up on the side of the lake. Anyone who agreed to sacrifice to the idols could flee the bitterly cold waters and warm his frozen bones in the baths. This was a great temptation which in the first cruel hour of the night overpowered one of the soldiers. Scarcely had he reached the baths, however, than he dropped to the ground and died.

Seeing this, the rest of the soldiers prayed the more earnestly to God: "Help us, O God our Saviour, for here we stand in the water and our feet are stained with our blood; ease the burden of our oppression and tame the cruelty of the air; O Lord our God-on Thee do we hope, let us not be ashamed, but let all understand that we who call upon Thee have been saved."

Their prayer was heard. In the third hour of the night a warm light bathed the holy martyrs and melted the ice. By this time all but one of the guards had fallen asleep. The guard who was still awake had been amazed to witness the death of the soldier who had fled to the baths and to see that those in the water were still alive. Now, seeing this extraordinary light, he glanced upward to see where it came from and saw thirty-nine radiant crowns descending onto the heads of the saints, immediately, his heart was enlightened by the knowledge of the Truth. He roused the sleeping guards and, throwing off his clothes, ran into the lake shouting for all to hear, "I am a Christian too!" His name was Aglaius, and he brought the number of martyrs once again to forty.

The next morning the evil judqes came to the lake and were enraged to find that not only were the captives still alive, but that one of the guards had joined them. The martyrs were then taken back to prison and subjected to torture; the bones of their legs were crushed by sledge-hammers. The mother of one of the youngest, Heliton, stood by and encouraged them to endure this trial. To their last breath the martyrs sang out, "Our help is in the name of the Lord," and they all gave up their souls to God. Only Meliton remained alive, though barely breathing.

Taking her dying son upon her shoulders, the mother followed the cart on which the bodies of the soldiers were being taken to be burned. When her son at last gave up his soul, she placed him on the cart with his fellow athletes of Christ.

The funeral-pyre burned out leaving only the martyrs' bones. Knowing that Christians would collect these relics to the eternal glory of the martyrs and their God, the judges ordered them to be thrown into the nearby river. That night, however, the holy martyrs appeared to the blessed bishop of Sebaste and told him to recover the bones from the river. Together with some of his clergy, the bishop went secretly that night to the river where the bones of the martyrs shone like stars in the water, enabling them to be collected to the very last fragment. So also do the holy martyrs shine like stars in the world, encouraging and inspiring believers everywhere to be faithful to Christ even to the end.

The Troparion of the Forty Martyrs in Tone 1

Those noble soldiers of the Master of all let us honor, for they were united by their faith as they passed through fire and water, and being enlisted by Christ they entered to divine refreshment. Now those pious warriors stand and intercede with Christ God for those who cry out. Glory to Him that hath given you strength. Glory to him that hath crowned you. Glory to Him that made you wondrous, Holy Forty Martyrs.

Another Troparion of the Forty Martyrs in Tone 1

Be Thou entreated for the sake of the sufferings of Thy Saints which they endured for Thee, O Lord and do Thou heal all our pains, we pray, O Friend of man.

The Kontakion of the Forty Martyrs in Tone 2

Having left every military array on the world, ye cleaved unto the Master Who is in the Heavens, O Forty Prizewinners of the Lord; for having passed through fire and water, O blessed ones, ye rightly received glory from Heaven and a multitude of crowns.

The Church of the Holy Forty Martyrs