I Look for the Resurrection of the Dead, and the Life of the Age to Come 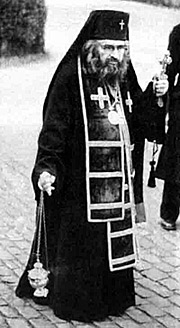 Holy Hierarch John (Maximovitch)
Our grief for our loved ones who have died should be inconsolable and boundless, had the Lord not given us eternal life. Our life would be senseless if it ended in death. What benefit would there be from virtue, or from good deeds? Then they would be right who say, “Let us eat, drink, and be merry, for tomorrow we die!” (cf. 1 Cor. 15:32). But man is created for immortality, and Christ by His Resurrection threw open the gates of the Kingdom of Heaven and eternal blessedness to those who believe in Him and live righteously. Our earthly life is preparation for the future, and our death is the end of that preparation. And as it is appointed unto men once to die, but after this the judgment (Heb. 9:27).

Then, a person leaves all his earthly cares and the body decays, in order to rise again at the general resurrection. But his soul continues to live, and does not cease its existence for a moment. The many dead who have appeared to us allow us to know to some extent what happens to the soul when it leaves the body. When it ceases to see with its earthly eyes, its spiritual sight opens up. This often happens to the dying even before the end, and they see what others do not see, while still seeing those around them and even talking with them. Coming out of the body, the soul finds itself amongst other spirits, both good and evil. Usually it goes toward those who are closer to it in spirit, but if it was under the influence of others while it was in the body, it will remain dependent upon them when it leaves the body, however unpleasant that meeting may be.

For two days the soul is relatively free and it can visit its favorite places on the earth, but on the third day it departs for other spaces. In this process it passes through the hordes of evil spirits who block its path and accuse it of various sins—sins that they tempted the person to commit. According to certain revelations, there are twelve such obstacles, the so-called “tollhouses,” and one or another kind of sin is examined at each tollhouse. Having gone through one, the soul goes on to the next; only after having passed through them all can the soul continue on its path, and not be cast forthwith into Gehenna. These demons and their tollhouses are so horrifying that when the Mother of God herself was informed by the Archangel Gabriel of her coming death, she prayed to her Son to deliver her from those demons. Fulfilling her prayer, the Lord Jesus Christ Himself appeared from Heaven to receive the soul of His Most Pure Mother and carry it to Heaven. The third day is dreadful for the soul of the reposed, and therefore the soul especially needs prayers then. After successfully passing through the tollhouses and bowing down before God, the soul over the next thirty-seven days visits the Heavenly Habitations and the abysses of hell, not yet knowing where it will end up, and only on the fortieth day is its place appointed until the resurrection of the dead. Some souls will be in a state foretasting eternal joy and blessedness, while others will be in fear of eternal torments that will come in full after the Last Judgment. Until then the souls’ condition can change, especially through the Bloodless Sacrifice (commemoration at the Liturgy), and through other prayers.

That the commemoration at the Liturgy is so important can be seen in the following event. At the opening of the relics of St. Theodosius of Chernigov (1896), the priest who was re-vesting the relics grew tired, and sitting down near the relics, dozed off. He saw before him the saint, who said to him, “I thank you for laboring for me. I ask you also to commemorate my parents when you serve the Liturgy,” and he said their names (Priest Nikita and Maria). The priest asked him, “How can you, a saint, ask me for prayers, when you yourself are standing before the heavenly Throne, granting God’s mercy to people?!” “Yes, that is true,” replied St. Theodosius, “but the sacrifice at the Liturgy is more powerful than my prayers.”

Thus, pannikhidas (requiems) and prayers at home for the reposed are beneficial, as are good deeds done in their name—for example alms or donations to the church, but commemoration at the Liturgy is especially helpful. There have been many appearances of the reposed and other occurrences that confirm how beneficent it is to commemorate the reposed. Many who have confessed before death but did not have a chance to manifest their repentance during life have been freed from torments and received rest. Prayers are always said in church for the eternal rest of the reposed, and even on the day of the Descent of the Holy Spirit (Pentecost), during the “kneeling prayers” at Vespers, there is a special prayer “for those held captive in hell.” Each one of us who wishes to show his love for the dead and give them true help can best do this by praying for them, and especially by having them commemorated at the Liturgy. They need this always, but particularly during those forty days in which the soul makes its way to the Eternal Habitations. Then, the body feels nothing, it does not see its gathered loved ones, does not smell the fragrance of the flowers, does not hear the eulogies. But the soul feels the prayers made for it, and is thankful to those who make them and spiritually abide near it.

Relatives and friends of the reposed! Do for them what they need, and what is within your power! Spend money not on the outer adornment of the coffin and grave, but on help to the needy in memory of your reposed loved one, and donate to the church where prayers are made for him. Show mercy towards the reposed, take care for his soul. All of us must make that journey. How we will wish then that people would pray for us! So let us also be merciful towards the reposed. As soon as someone dies, call or send a message without delay to ask a priest to read the “Prayers at the departure of the soul,” which are to be read over every Orthodox Christian just after the moment of their death. If possible, try to have the funeral service in a church, and have the Psalter read over the body of the reposed up to the commencement of the funeral. The funeral service can be without pomp, but must be served in full, without any abbreviating; do not think about yourself and your own comfort, but about the reposed one with whom you are parting forever. If there are several reposed ones in the church, do not demand that the funerals be served separately. It is better that two or more be included in one funeral service than to have them served in turn, and the services be shortened due to lack of time; for every word of prayer for the reposed is like a drop of water to the thirsty. Take care without fail to request a forty-days Liturgy—that is, the daily commemoration for the next forty days at the Liturgy. In a church where the Liturgy is served daily, the reposed who have had their funerals there will usually be commemorated for forty days or more. If the funeral was served in a church where there is no daily service, the loved ones should order a forty-days Liturgy in a place where there are daily services. It is also good to send prayer requests to the monasteries in Jerusalem, where prayers are continually made at holy sites. But the forty-days Liturgy should begin immediately after death, when the soul especially needs prayerful help, and therefore the forty-days commemoration should begin in the nearest place where there are daily services.

We shall take care for those who have departed before us to the other world, and to do everything we can, remembering that Blessed are the merciful, for they shall obtain mercy (Mt. 5:7).

From May the Russian Land be Renewed,
Moscow: Sretensky Monastery, 2006