Troparion of the Bridegroom 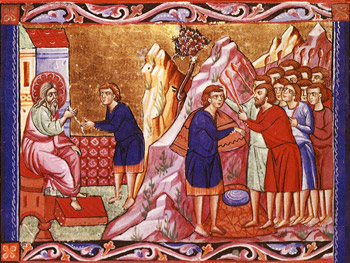 Jacob, Joseph, and his brothers.
Behold! The bridegroom approaches in the middle of the night,
And blessed is that servant whom He shall find watching;
But unworthy he whom He shall find careless.
Beware, therefore, O my soul.
Be not overcome with sleep,
lest thou be given over to death and shut outside the kingdom.
But arise and cry:
Holy, holy, holy art Thou, O God!
Through the Theotokos have mercy on us!

Jacob lamented the loss of Joseph,
But his noble son was seated on a chariot and honored as a king.
For he was not enslaved to the pleasures of the Egyptian woman,
But he was glorified by God, Who sees the hearts of men
and bestows on them a crown incorruptible.

Ikos: Let us now add our lamentation to the lamentation of Jacob, and let us weep with him for the ever memorable and chaste Joseph, who though enslaved in body preserved his soul free from bondage and became lord over all Egypt. For God grants His servants a crown incorruptible.

The Exapostilarion (The Hymn of Light)

Thy bridal chamber, O my Savior, I see adorned,
and I have no raiment with which to enter therein.
Enlighten the garment of my soul, O Giver of Light, and save me.

On Holy and Great Monday we commemorate the blessed Joseph the All-comely and also the withered fig tree. Inasmuch as the Passion of our Lord Jesus Christ has its beginning on this day, and as Joseph is regarded as an image of Christ from former times, he is thus set forth here.

Joseph was the son of the Patriarch Jacob, born to him by Rachel. Being envied by his brethren on account of certain of his dreams, he was first concealed in a dug-out pit, and his father was tricked by a bloody garment and the deceit of his children into thinking that he had been devoured by some beast. Joseph was then sold to some Ishmaelites for twenty pieces of silver; they, in turn, sold him to Potiphar, captain of the eunuchs of Pharaoh, king of Egypt. His wife was enraged by the young man's chastity, because not wishing to commit sin, he fled from her, leaving behind his garment. She slandered him to his master, and he was put into bonds in a harsh prison. Afterwards, he was released because of his ability to interpret certain dreams; he was brought before the king and appointed governor of the whole land of Egypt. Later, he was made known to his brethren through his distribution of grain. Having spent the whole of his life well, he died in Egypt, recognized as being great in his chastity and kindness toward others. He is, moreover, a prefiguring of Christ. Christ was also envied by His own people, the Jews: He was sold by a disciple for thirty pieces of silver and was imprisoned in the dark and gloomy pit of the grave, whence He broke out by His own power, triumphing over Egypt, that is, over every sin. In His might He conquered it, and He reigns over all the world. In His love for mankind He redeemed us by a distribution of grain, inasmuch as He gave Himself up for us, and He feeds us with Heavenly Bread, His own Life-bearing Flesh. For this reason, Joseph the All- comely is brought to mind at this time. He is also commemorated on the Sunday before the Nativity of Christ.

At the same time, we also commemorate the withered fig tree, because the divine Evangelists Matthew and Mark tell of it after their accounts of the palm branches. One says, "Now the next day, when they had come out from Bethany, He was hungry" (Mark 11:12); while the other says, "Now in the morning, as He returned to the city, He was hungry. And seeing a fig tree by the road, He came to it and found nothing on it but leaves, and said to it, 'Let no fruit grow on you ever again.' Immediately the fig tree withered away" (Matt. 21:18-19). The fig tree, then, is the Jewish synagogue, in which the Savior did not find the necessary fruits of obedience to God and faith in Him, but only the leafy shade of the Law; He took away even this, leaving it completely bare. But if anyone should ask, "Why did an inanimate tree wither and fall under a curse when it had committed no sin to make it wither?" It was because some people, seeing that Christ went about doing good to all, never causing real suffering for anyone, imagined that He had only the power to do good and not to do harm. The Master, who loves mankind, did not wish to demonstrate His power on a man and commit such a deed. To convince an ungrateful people, however, that He also possessed the might to impose punishment, but not wishing to use that power in His goodness, He inflicted such punishment upon inanimate and insensible nature.

There is also another mysterious explanation, which has come down to us from the wise elders. As St. Isidore of Pelusium says, "This was the tree of the transgression of God's commandment, whose leaves, the transgressors, also used to cover themselves. Because it did not suffer at that time, Christ, in His love for man, cursed it, so that it would no longer bear the fruit that was the occasion of sin."

It is also quite clear that sin is likened unto the fig, inasmuch as it possesses the "delight" of sensual pleasure, the "stickiness" of sin itself and the "hardness and sharpness" of a guilty conscience.

The Fathers, moreover, put the story of the fig tree here to arouse compunction and in relation to the story of St. Joseph, since he is a prefiguring of Christ.

The fig tree is also every soul which is devoid of all spiritual fruit. In the morning, that is, after this present life, if the Lord finds no refreshment in such a soul, He withers it with a curse and hands it over to the everlasting fire. It remains standing as a dried-up post, striking fear into those who do not produce the fitting fruit of the virtues.

Through the prayers of St. Joseph the All-comely, O Christ our God, have mercy on us and save us. Amen.