For Orthodox Christians, the red Easter egg is much more than a celebration of the end of fasting -- it is an attestation of the Resurrection of Jesus Christ. 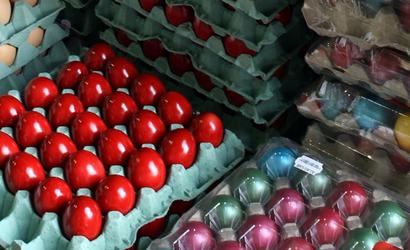 Traditionally, Easter eggs are dyed throughout the Orthodox Christian world on Holy Thursday, and they are dyed red to represent the redeeming blood of Christ that was shed on the Cross, the white egg (before being dyed) represents the white marble tomb were Christ's body was laid after He was taken down from the Cross, and the hard shell of the egg symbolises the sealed tomb of Christ.

On Easter Sunday, a ritual of the cracking of the eggs take place, with people tapping each others' egg, symbolising the 'cracking' of Christ's tomb and the bonds of death and His resurrection.

The traditional greeting on Easter, and for the next 40 days until the Ascension, is "Christos Anesti" (Christ is risen), followed by the response "Alithos Anesti" (Truly he is risen).

The egg was a symbol of life in antiquity and from the tomb life came out, the Risen Lord, while the red colour of the Easter egg symbolises crucified and resurrected Christ’s life-giving blood.

In the Orthodox faith, the red colour of the eggs symbolises several things. The Roman soldiers put a red cloak on Christ, as the King of the Jews, while mocking and torturing Him.

Also, two years after the Resurrection, Mary Magdalene was carrying a basket full of white eggs as she went to Jerusalem, and met up with Tiberius, the governor after Pontius Pilate, whom she welcomed to Jerusalem and wished him to be righteous to the people of Jerusalem, unlike his predecessor, who crucified the Son of God who was resurrected on the third day.

Tiberius replied that, if all she had told him of the resurrection and the miracles performed by Christ were true, the white eggs in her basket should turn red and then he would believe. And behold, the eggs turned red. Mary Magdalene gave one red egg to the governor Tiberius and took one herself, saying "Christ is Risen", to which he replied "Truly, he is risen".

In another account, a woman who did not believe in the Resurrection of Christ said "if the white eggs I am holding turn red, then I will believe", and the eggs miraculously turned red.

Still yet, the red colour symbolises the joy of the Resurrection, and also wards off all evil.