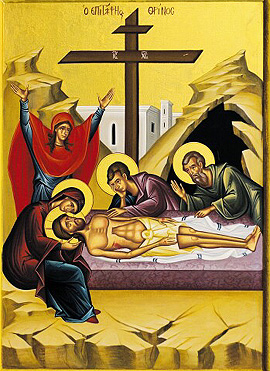 Holy Friday, the burial of Jesus Christ
Holy Friday, also known as Good Friday, or Great Friday, is a holiday observed primarily by Christians commemorating the crucifixion of Jesus Christ and his death at Calvary. The holiday is observed during Holy Week as part of the Paschal Triodion on the Friday preceding Easter Sunday.

Based on Christian scriptural details of the Sanhedrin Trial of Jesus, the Crucifixion of Jesus was most probably on a Friday (John 19:42). The estimated year of Good Friday is AD 33.

In the afternoon, around 3 pm, all gather for the Vespers of the Taking-Down from the Cross, commemorating the Deposition from the Cross. The Gospel reading is a concatenation taken from all four of the Gospels. During the service, the body of Christ is removed from the cross, as the words in the Gospel reading mention Joseph of Arimathea, wrapped in a linen shroud, and taken to the altar in the sanctuary.

Near the end of the service an epitaphios or “winding sheet” (a cloth embroidered with the image of Christ prepared for burial) is carried in procession to a low table in the nave which represents the Tomb of Christ; it is decorated with many flowers.

The epitaphios itself represents the body of Jesus wrapped in a burial shroud, and is a cloth icon of the body of Christ. Then the priest may deliver a homily and everyone comes forward to venerate the epitaphios. In the Slavic practice, at the end of Vespers, Compline is immediately served, featuring a special Canon of the Crucifixion of our Lord and the Lamentation of the Most Holy Theotokos by Symeon the Logothete. 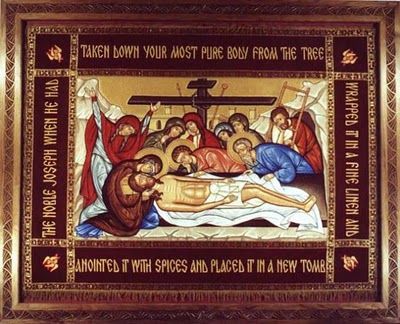 The epitaphios ("winding sheet"), depicting the preparation of the body of Jesus for burial.

Before the service begins, a “tomb” is erected in the middle of the church building and is decorated with flowers. Also a special icon which is painted on cloth (in Greek, epitaphios; in Slavonic, plaschanitsa) depicting the Saviour is placed on the altar table. In English this icon is often called the winding-sheet. 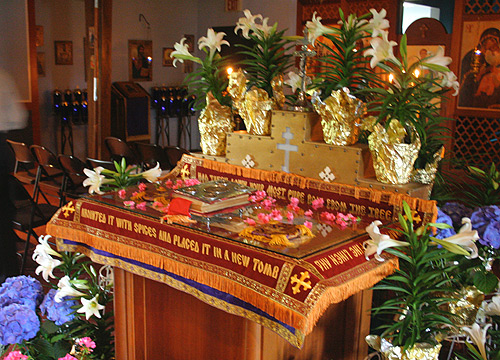 Vespers begin as usual with hymns about the suffering and death of Christ. After the entrance with the Gospel Book and the singing of Gladsome Light, selections from Exodus, Job, and Isaiah 52 are read. An epistle reading from First Corinthians (1:18-31) is added, and the Gospel is read once more with selections from each of the four accounts of Christ’s crucifixion and burial. The prokeimena and alleluia verses are psalm lines, heard often already in the Good Friday services, prophetic in their meaning:

They divided my garments among them and for my raiment they cast lots (Psalm 22:18).

After more hymns glorifying Christ's death, while the choir sings the dismissal song of St Simeon, the priest vests fully in his dark-colored robes and incenses the winding-sheet which still lies upon the altar table. Then, after the Our Father, while the people sing the troparion of the day, the priest circles the altar table with the winding-sheet carried above his head and places it into the tomb for veneration by the faithful.

The noble Joseph, when he had taken down Thy most pure body from the Tree, wrapped it in fine linen and anointed it with spices, and placed it in a new tomb (Troparion of Holy Saturday).