Even If I Descend into Hell… 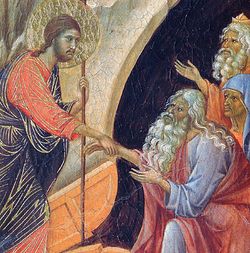 Charles Williams, one of C.S. Lewis’ circle of friends, once wrote a book entitled, The Descent into Hell. In it he chronicles the slow inexorable damnation of a soul. Choices made or not made – a chronicle more of spiritual ennui than of willful rebellion – it is a very sobering read.

There is an understanding of hell that goes far beyond the typical lake of fire and burning Gehenna. Those images, though Biblical, frequently do not speak to the full existential character of hell. Thus it becomes something of a commonplace in our time to think of hell much like heaven – just one of the alternatives we face in life after death. Neither are considered alternatives within the present or having anything to do with daily life other than as eventual consequences.

This is a tragedy, both for its failure to give a more compelling account of the “nowness” of the Kingdom of God (which Christ certainly preached – Luke 17:21), and for its frequent caricature of hell which falls far short of describing the emptiness of humanity apart from God (even now).

The Orthodox faith, particularly in its liturgical cycle, makes much of the descent of Christ into Hades. The service on Holy Saturday is very much about this descent, noting that the victory of Christ over death and hell, begins first in hell (I am using “hell” and “hades” interchangeably at this point – a common practice within Church language).

The closest thing to a definition of hell given in Scripture is not the imagery of burning gehenna, but in a statement Christ makes in the Gospel of John. “This is condemnation, that Light has come into the world, and men preferred darkness to the Light” (John 3:19). This image is, for me, far more poignant than the lake of fire and such. The weakness found in the frightening, graphic imagery of the fire, gnashing of teeth, etc., are their passive character. It is easily translated into something that is done to us. It might even imply that one would have wanted things to be different.

The verse in John implies just the opposite – hell (condemnation) is what it is – only because we want it so. As a priest this portrayal of condemnation has been by far the most helpful approach in dealing pastorally with people. It is not the threat of what someone (God) may do to them, but the existential reality of what you are doing to yourself – even now.

For some, thinking about hell as a choice sounds absurd. They reason within themselves, “Who would willingly choose hell?” I think to myself, “Plenty of people – I meet them all the time and sometimes I am one of them.”

In the gospel the story of the rich young ruler is the story of someone who meets Christ, is loved by Christ, and is invited into the intimacy of discipleship by Christ himself! The cost, however, is everything he owns. And we are told he went away sad because he was rich. He went away sad, but he went away. Human beings frequently choose something other than God – even though it makes them sad – because they love darkness more than they love the light.

That is the story of our descent into Hell. It is a movement away from God, away from the light and a descent into darkness, alienation, and self-love. It is a hell that infects our hearts even in the present and has the potential for becoming the very definition of the state of our souls beyond the grave.

But this is where the liturgical celebration of Christ’s descent into hell becomes particularly joyful. The love of God is such that He entered into hell – into the depths of darkness where we had plunged ourselves. “The people who sat in darkness have seen a great light,” refers not only to the Gentiles who can now hear the gospel, but to those souls in Hades who behold the Light of Christ in the midst of that great darkness.

“Hell was embittered!” is the refrain in St. John Chrysostom’s Paschal homily. The darkness did not want to give up its captives.

St. Silouan of Mt. Athos (+1938) heard from God, “Keep your mind in hell and despair not.” It ranks among the most peculiar sayings in the lives of any of the saints. For him, it meant that he was to enter into the despair and darkness of others, in prayer, but not to despair himself. He was to pray for the world as though we were responsible for the sins of all. He was, like Christ, to follow love to its complete conclusion and extend his love to the uttermost. This is the love that we see on the Cross – the love of God that reaches even to the depths of hell.

If we are not bound by forensic imagery, but instead understand heaven and hell as the state of the soul before God, then we can see far more clearly the extent of the love of God. “Lo, if I make my bed in hell, Thou art there” (Psalm 139:8). It also is the measure of the love that is expected of us. Thus we are commanded to forgive even our enemies.

On a day to day basis we are called to descend into the darkness of those about us and pray. We should pray for Light, for forgiveness for grace to do whatever mysterious work it does in creating a clean heart. To follow the path of Christ always leads us to the Cross – but we should see that the Cross stands firmly in the midst of man’s darkness. Glory to God who has shown us the Light!