Pascha: The Feast of Feasts 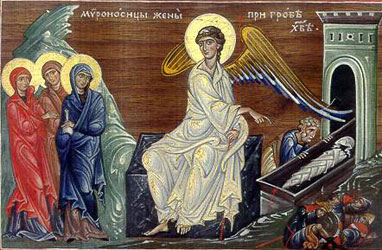 My first experience of Easter services in an Orthodox church was not what I had expected. In the spring of 1997, I had only recently felt the tug toward Eastern Christianity that would culminate in my Chrismation into that body a year and a half later. Before that first Easter, I had attended the common Sunday service, the Divine Liturgy, only a few times earlier in the spring, so I didn't have much upon which to base any of my several expectations.

In any case, when I arrived that Sunday morning for what I thought would be my first Orthodox Easter liturgy, I was astonished to see that I was one of only three people sitting in the airy expanse of Saint Nicholas Orthodox Church in Virginia Beach. The other two were a pious elderly couple, a couple -- I would eventually learn -- who never missed church under any circumstances.

The two priests serving at the altar and the four drowsy altar boys assisting behind the iconostasis had our little congregation outnumbered precisely two-to-one.

I remember thinking (and may have even said aloud) Where is everyone?

About an hour later, over coffee and a plate of sticky baklava, Father George Paulson would tell me the answer: they were all home sleeping. And God bless them! he added. They're exhausted!

What I had attended that Sunday morning was not, it turned out, the actual Easter service, was not the resurrection service of Holy Pascha; it was, rather, the Agape Vespers, a relatively brief but joyful proclamation of God's love for all people, something of a denouement to the climactic celebration of the night before -- or, rather, of a very, very much earlier Sunday morning.

As it happened, while the nearly four hundred parishioners of Saint Nicholas Church were observing the central liturgical celebration of their entire year, I had been the one home asleep.

What I have come to understand -- and have profoundly come to love -- since that day is the Feast of Great and Holy Pascha itself, as well as the many services of a Holy Week that follows on the heels of an also significant Lenten season.

That's a lot to take in, and I daresay that while I have been taking it in, incrementally, for the past fifteen years, I have a strong sense that I have only scratched the surface of what and how these worship services work on those of us who observe them.

And we're just getting started.

This morning (Thursday) we celebrated the Vesperal Divine Liturgy of Saint Basil the Great, and tonight we will return to have our hearts broken anew by the Twelve Gospel readings that lead to the Holy, Saving and Dread Passion of Our Lord God and Savior Jesus Christ. At that service, we will nail his icon to his cross.

Holy Friday will lead us to the service of the Great Hours in the morning, the service of the Unnailing in the afternoon, and in the evening the soul-rending service of Lamentations.
Saturday morning will find us once more at a Vesperal Divine Liturgy of Saint Basil the Great.
And Saturday night, at 11:30 p.m., we will gather to celebrate that for which all of the above has served to prepare us: The Anastasi, the Resurrection of Jesus Christ.

Having gathered amid readings from the Psalms, we will settle in with our unlit candles. At midnight, the lights will go out, and moments later a single candle -- the Paschal candle -- will be lit at the altar.

With this flame, passing the flame from wick to wick, all 300-plus celebrants will light their own candles, and the glorious hymn of Christos Anesti, Christ is Risen will resound throughout the nave.

We will celebrate, thereafter, the sweetest liturgy of the year, the sermon of which was supplied by Saint John Chrysostom in the fourth century:

"And he shows mercy upon the last, and cares for the first; and to the one he gives, and upon the other he bestows gifts. And he both accepts the deeds, and welcomes the intention, and honors the acts and praises the offering. Wherefore, enter you all into the joy of your Lord; and receive your reward, both the first, and likewise the second. You rich and poor together, hold high festival. You sober and you heedless, honor the day. Rejoice today, both you who have fasted and you who have disregarded the fast. The table is full-laden; feast you all of it, sumptuously. The calf is fatted; let no one go hungry away.

"Enjoy, all of you, the feast of faith: Receive the riches of loving-kindness, and let no one bewail his poverty, for the universal kingdom has been revealed. Let no one weep for his iniquities, for pardon has shown forth from the grave. Let no one fear death, for the Savior's death has set us free. He that was held prisoner of it has annihilated it. By descending into Hell, He made Hell captive. He embittered it when it tasted of His flesh. And Isaiah, foretelling this, did cry: Hell, said he, was embittered, when it encountered Thee in the lower regions.