The Faith of the Myrrhbearing Women 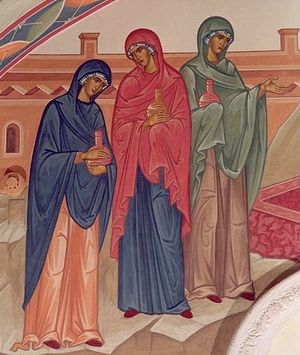 The Myrrh-Bearing Women. Wall painting in the lower church of Christ the Savior Cathedral. Photo: hramdecor.ru
"And when the Sabbath was past, Mary Magdalene, and Mary the mother of James, and Salome, had bought sweet spices, that they might come and anoint Him. And very early in the morning the first day of the week, they came unto the sepulcher at the rising of the sun. And they said among themselves, Who shall roll us away the stone from the door of the sepulcher?" (Mk. 16:1-3).

Brothers and sisters! Can you imagine the state of mind these Myrrhbearing women were in? For those who lived through Soviet times in Russia and through the persecution of the Church, it is so understandable. In some churches, as in the outskirts of Kiev, this service (the Burial of the Savior) was performed at night. People made their way to such a church through dark streets. Anything could happen, you had to be careful of everything. Neighbors might hear that you went somewhere at night; and you could be stopped on the street. And the service itself in church and the carrying of the Shroud around the church could be interrupted by the authorities. One did not know if tomorrow, on Holy Saturday, this already semi-Easter Liturgy would be performed, because the priest might be arrested.

The Myrrhbearers were in such a state of mind. They themselves were in danger of being arrested at any moment. Even in their homes they locked the doors from inside; they were afraid of any knock, any little sound. Two days before, Peter had denied that he too was with Jesus, meaning that he was one of His disciples. And before whom? Before a servant girl, and only because she might report him.

Such was the situation. Their Teacher had been condemned and sentenced to the most terrible death, had been executed. And now it was their turn: as the disciples of the executed Teacher they were outside the law. More than that — they were probably being sought already. The most sensible thing would have been to flee somewhere, to hide. But instead of that, they decided to go while it was still night to the sepulcher which was not far from the place of execution. They knew well that the entrance to the sepulcher was blocked by a stone, which as the Gospel says, was "very great" (Mk. 16:4), that it bore a seal, that Roman guards were guarding the tomb, and that these guards were armed and especially vigilant because they had been warned that the disciples might steal His body.

Actually, in terms of reason, what these weak women wanted to do was not only impossible, but was just a mad risk. And yet they went anyway. How? Why? What powerful force was drawing them? This force was the Word of God expressed in the Law of Moses. And fulfilling what was for them a holy law, they bought perfumes and went to anoint Him. This required their conscience. And this strength of faith in the Word of God, strength of love toward their tortured Teacher, and strength of hope that God would help — proved to be stronger than fear, stronger than reason, stronger than everything else.

And what happened? When they arrived, the guards had run away in fear. And when they entered the tomb, they saw a youth sitting on the right side, clad in white clothes; and they were terrified. But he said: "Be not affrighted: Ye seek Jesus of Nazareth, which was crucified; He is risen; He is not here: behold the place where they laid Him" (Mk. 16:6).

Doesn’t the same thing happen in our life? The Myrrhbearers, fulfilling the Old Testament Law, the Law of Moses, bought perfumes and went to anoint His body, the body of Christ. And we, fulfilling the Law of the New Testament, the Law of Christ, must also acquire spiritual perfumes — His commandments: humility, meekness, peace loving — and we must anoint His body with spiritual oil (that is, with love and mercy). And His Body is the Church of Christ. This is all our brothers and sisters in Christ; and more — this is even our enemies. How often in doing this, we subject ourselves to discomfort, losses, mockery, and sometimes even dangers. And what insurmountable obstacles are raised by our cold mind, our egotism! Not infrequently we yield, we retreat, we are afraid to express ourselves loudly and openly as His disciples.

But if we throw off this shameful fear and only begin to fulfill His teaching, only begin to follow in His footsteps, the same will happen to us that happened to the Myrrhbearers: the obstacles will disperse of themselves, will fall away, like the stone from the door of the tomb. All those who would disturb us will run away; we will not even find them. Before us will be one thing — the illuminated sepulcher of Christ. And there will be such a clearness that all doubts will vanish. We will know what to do, how to act; and that which seemed impossible will become possible.

From The One Thing Needful, by