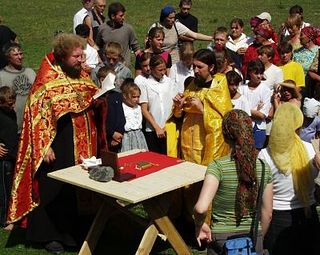 Others are more concerned about proselytism from outside Orthodoxy - from the Western Protestant and Roman Catholic missionaries who since the end of communism have been rushing in to convert Russia, Bulgaria, Romania and other traditionally Orthodox lands to their way of thinking.

Western Christians have tended to think of Orthodox Christians as somehow "non-missionary". The 20th century, after the First World War, has been the period of "ecumenical" contact between Christians of different traditions. But the mid-20th century, from 1920-1970, was the time when Orthodox mission was at its lowest ebb. After the fall of Constantinople to the Turks in 1453, Russia was virtually the only centre of Orthodox mission, and the Bolshevik revolution put an end to that.

The revival of Orthodox mission in our time is largely a result of seeds planted by people like Archbishop Yannoulatos of Albania, whose publication Porefthendes appealed for a renewed missionary vision in the 1950s and 1960s. In Africa, many people were clamouring to join the Orthodox Church in the 1930s, and brought a new mission vision to Orthodoxy in East Africa after the Second World War.

More recently people in other places have been drawn to Orthodoxy, not by Orthodox missionaries going out and proselytising, but because they believed that God was calling them to become Orthodox Christians. There was a group of "Evangelical Orthodox " in America, and groups in places like Portugal and Indonesia and the Philippines.

This process of people coming to Orthodoxy has led some to say that Orthodox mission is not "centrifugal", but "centripetal". Instead of missionaries going out, the Church waits for people to come in. But even this is not strictly true. If we look at Orthodox mission history, there are many instances in which missionaries have gone out to people of different cultures, or who live in different parts of the world. SS Cyril and Methodius, St Stephen of Perm, St Innocent of Alaska and St Nicholas of Japan are just a few examples of such missionaries.

In places like Russia and Romania, where the Orthodox Church was well established, but in the last couple of generations has been persecuted, there is also a great missionary task. Places like Russia and Romania need to be re-evangelised. Could that be the difference between evangelism and proselytism? Is it "evangelism" when done by Orthodox Christians from within a traditionally Orthodox country, and "proselytism" when done by non-Orthodox from outside? I don't think so.

Evangelism, in the English use of the term, means telling or spreading good news. The four gospels of the New Testament tell the good news about Jesus Christ. When we, as Christians, tell others about what God has done in Jesus Christ, we are evangelising.

Proselytism, on the other hand, means "bringing people in", causing them to change their beliefs, their party, their opinions or their religion. In proselytism there is a strong element of telling people how bad or wrong their present beliefs are. Telling people that their beliefs are wicked or wrong does not appear as "good news " to them. If we evangelise, we are not saying "Our religion is better than your religion". We are not setting ourselves up as morally or spiritually superior beings, and trying to get people to leave their religion and join ours so that they can be superior like us. When we evangelise, we say, in effect, that God has done great things. Someone once described evangelism as "One beggar telling another beggar where to get bread." To a hungry beggar, that is good news. And a beggar telling another beggar such news can hardly boast about it, or claim to be superior because of it.

When Buddhist missionaries first left India to go to other places, when they arrived in a new place they would only say two kinds of things there: "This is what we do" and "This is what we do not do". They did not comment at all on what the people there were already doing in their religion or their philosophy. They did not criticise or condemn the people's beliefs and practices. And that might be a good rule for Christian missionaries to follow too. If we followed such a rule, then we would evangelise and not proselytise. And many Orthodox missionaries have followed this rule.

If people who hear the gospel say they want to follow Christ, and be baptised, then, of course, there is more for them to learn. If they truly desire to follow Christ, then they also want to learn about the Christian faith, and about its application to their own lives and behaviour. Sometimes, they surprise missionaries with their fervour. When Prince Vladimir of Kievian Rus became a Christian in 988, he surprised the Byzantine missionaries by seeking to abolish capital punishment in his dominions. There was a radical change in his life-style.

While we should expect people's life-style and values to change when they become Christian, they do not necessarily become Christian simply by changing their life-style, especially if they are made to change it by force or fraud. Forcing such changes on people is proselytism, not evangelism.

In the last few years missionaries from some Western Christian groups, mainly from the USA, have been pouring into Russia and neighbouring countries. They have felt that God was calling them to bring Christ to the godless communist world. They ignore the fact that the gospel of Christ has been preached in Russia for over 1000 years. That, they believe, is not the true gospel, and they urge Orthodox Christians to leave the Orthodox Church, which they say is "idolatrous", and to join their sects. But that is not evangelism. That is proselytism.

It was so bad at one point that it seemed the Orthodox Church in Russia and Eastern Europe were a bit like the man who was travelling between Jerusalem and Jericho, and got mugged. The Russian Orthodox Church was lying on the ground, bruised and bleeding after 70 years of atheist persecution. And some of the Western "evangelists" who poured in were worse than the priest and the Levite; they didn't just pass by on the other side, they went through the victim's pockets to see if the thieves had left anything that they could take.

I have tried, in this article, to indicate where I think the main differences between evangelism and proselytism lie. The distinction is an important one, and I believe it is one of the most serious questions facing Orthodox missiologists today. If we do not face it, we Orthodox Christians could find ourselves criticising actions by others that we practise ourselves, and condemning things in some places that we condone in others.

melxiopp5/12/2011 7:28 pm
This reminds me of an exchange in Archimandrite Sophrony’s Saint Silouan of the Athonite:

‘Father Archimandrite, people feel in their souls when they are doing the proper thing, believing in Jesus Christ, revering the Mother of God and the Saints, whom they call upon in prayer, so if you condemn their faith they will not listen to you…. But if you were to confirm that they were doing well to believe in God and honor the Mother of God and the Saints; that they are right to go to church, and say their prayers at home, read the Divine word, and so on; and then gently point out their mistakes and show them what they ought to amend, then they would listen to you, and the Lord would rejoice over them. And this way by God’s mercy we shall all find salvation…. God is love, and therefore the preaching of His word must always proceed from love. Then both preacher and listener will profit. But if you do nothing but condemn, the soul of the people will not heed you, and no good will come of it.’
×