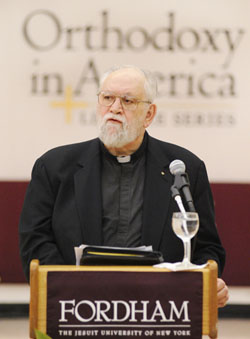 Fr. Stanley Harakas
The traditional definition of physical death is "the separation of soul and body." Such a definition is not subject to objective observation. Thus it is not within the province of theology to determine the medical indications of death and the onset of the dying process. However, in reference to the terminally ill person, certain distinctions can be made. Physical life is generally understood to imply the ability of the person to sustain his or her vital activities. Physical death begins when interrelated systems of the body begin to break down. Death occurs when the systemic breakdown becomes irreversible. It may well be that physical life and death are events in a continuum in which it is impossible to discern when the dying process actually begins. Nevertheless, the bias of the Church and the traditional bias of the medical practitioner (cf. Oath of Hippocrates) is to do everything possible to maintain life and hinder the onset of dying and death. The medical use of drugs, surgical operations, and even artificial organs (mechanical kidneys, lungs, hearts, etc.) are considered legitimately used when there is a reasonable expectation that they will aid the return in due time to normal or close to normal functioning of the whole organic system.

The special case arises in that it is now medically possible to keep the body "alive" with a complex array of artificial organs, medications, transfusions, and the like. Under these conditions it may not be feasible to expect, with any degree of probability, the restoration of the organic functioning of the body. When, especially, there is no evidence of brain activity in conjunction with the systemic breakdown, we can safely say that the patient is no longer alive in any religiously significant way, and that, in fact, only certain organs are functioning. In such a case there is no moral responsibility to continue the use of artificial, means. It is of interest that the Prayer book of the Eastern Orthodox Church includes a whole service devoted to those in the process of dying. In the case of the individual whose death is prolonged and attended by much "struggling to die," the key sentence in the prayer calls upon God to separate the soul from the body, thus giving rest to the dying person. It asks God "to release your servant (name) from this unbearable suffering and this continuing bitter illness and grant rest to him" (Mikron Euchologion, p. 192).

However, it must be emphasized that this is a prayer directed to God, who, for the Orthodox, has ultimate dominion over life and death. Consequently, the preceding discussion in no way supports the practice of euthanasia. Euthanasia is held by some to be morally justified and/or morally required to terminate the life of an incurably sick person. To permit a dying person to die, when there is no real expectation that life can sustain itself, and even to pray to the Authorof Life to take the life of one "struggling to die" is one thing; euthanasia is another, i.e., the active intervention to terminate the life of another. Orthodox Christian ethics rejects the alternative of the willful termination of dying patients, regarding it as a special case of murder if done without the knowledge and consent of the patient, and suicide if it is permitted by the patient (Antoniades, II, pp. 125-127). One of the most serious criticisms of euthanasia is the grave difficulty in drawing the line between "bearable suffering" and "unbearable suffering," especially from an Eastern Orthodox perspective, which has taken seriously the spiritual growth that may take place through suffering (Rom. 8:17-39).

Ethical decision making is never precise and absolute. The principles that govern it are in a measure fluid and subject to interpretation. But to elevate euthanasia to a right or an obligation would bring it into direct conflict with the fundamental ethical affirmation that as human beings we are custodians of life, which comes from a source other than ourselves. Furthermore, the immense possibilities, not only for error but also for decision making based on self-serving ends, which may disregard the fundamental principle of the sanctity of human life, argue against euthanasia.

Generally speaking, the Orthodox Church teaches that it is the duty of both physician and family to make the patient as comfortable as possible, to provide the opportunity for the exercise of patience, courage, repentance, and prayer. The Church has always rejected inflicted, and unnecessary voluntary suffering and pain as immoral; but at the same time, the Church also has perceived in suffering a positive value that often goes unrecognized in the "logic of the world."

The only "eu-thanasia" (Greek for "a good death") recognized in Orthodox ethics is that death in which the human person accepts the end of his or her life in the spirit of moral and spiritual purity, in hope and trust in God, and as a member of his kingdom. True humanity may be achieved even on a deathbed.

From: For the Health of Body and Soul: An Eastern Orthodox Introduction to Bioethics

james wiliams8/7/2019 10:44 am
The death os a person can only be verified with the death of the body (heart) In any other cases those doctors or relatives who allow to induce death are taking upon their selves the respobsobility to disrupt the descision of God as to the time of death that is the providence of God for the persons better after death placing.
God bless https://wordpress.com/posts/jameswiliamsblog.wordpress.com

Aleksandra2/4/2014 6:48 pm
I feel that "the Orthodox Church teaches that it is the duty of both physician and family to make the patient as comfortable as possible" needs to be addressed further. The following article demonstrates that lives are being "shortened" with the use of morphine and that the people dying have little or no choice.

"....if a doctor says, ''I can see you're in pain, let's start a morphine drip,' '' a patient may not realize that the pain medication will shorten his life. ''I can imagine a great many patients who would say, 'I don't want this pain, but if the medication is shortening my life, I can live with the pain,' '' she said."

Surely, the church must speak on this important issue that has affected and will affect all of us.
×