Reaching Out In Paraguay

A Native Colombian Travels to Paraguay with the First OCMC Team to this Country. 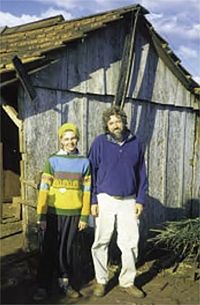 Fernando, standing with a local Ukranian-Paraguayan.
We were flying over the Amazon. a storm illuminated the clouds; lightning flashed like veins of giant twisted roots in the darkness. There below, I imagined the jungle animals safeguarded in their nests, the buzz of insects and the swollen rivers. And here, in this metal capsule, people slept or entertained themselves watching the latest movie as our airplane was traveling ever closer to Florida.

I had just journeyed through part of the Southern Cone of Latin America. Although I was born in Colombia, this was the first time I had the opportunity to discover this part of the continent. With the Mission Center, the help of Holy Trinity Church members and other friends, I had the privilege of becoming part of a OCMC Mission Team. Making contact with Orthodox Christians who spoke my native tongue was something that, up to now, had eluded me. The Mission Team had our base in the Itapua province in southern Paraguay, next to the Parana River. On the other side of the river is the Mission province of Argentina and close by, the Iguasu Falls where Paraguay, Argentina and Brazil all come together to host this spectacular natural wonder. Paraguay is one of the least populated countries in South America and it has tried to increase immigration by offering tracts of virgin land for settlements. There are towns of Japanese immigrants and, in the remote Chaco region, there are several Mennonite colonies.

A generation ago, a group of Ukrainians arrived, cleared the jungle, fought with jaguars and anacondas and little by little started small farms. Some of the original settlers are still alive and told us about their trials, their struggles to survive and how, when their children were not watching, they cried to think they would never see their families and homeland again.

The greatest concentration of Ukrainian Orthodox is in the small town of Fram, in Itapua. With amazing energy and drive they have made an agricultural paradise out of this piece of jungle. Weaving their Ukrainian culture and traditions with their Orthodox Faith, they demonstrate order and discipline, and have become an exemplary town throughout Paraguay. At a world-wide level, different entities have shown interest in applying their model of community to other areas of Latin America. One interesting case is the Health Center, which has an ambulance, incubators, operating rooms and emergency rooms all paid for and maintained by the inhabitants of Fram. As well as participating actively in their civil duties, the mayor and many public officials are very active in the Orthodox Church.

Our group of mission team members came from many distinct places and backgrounds: Fr John Harvey (OCMC Board Member) from Woonsocket, Rhode Island; Thomas Sturdivant, a geologist from Clinton, Tennessee; from India, Keith Fernandez, a theater student in Edmonton, Alberta Canada; Dejan Gality, a St. Tikon’s seminarian from Hungary (and also a recipient of a grant from the Louis and Helen Nicozisis Mission Team Endowment); and Suzanne Stappas from Elm

Grove, Wisconsin. All the meetings were special. We were the first contact the Paraguayans had had with other Orthodox in many years.

Each missionary had a different host. I stayed with the Terebuja family, who live in the outskirts of Fram. I was taken into their home as if I were family. Doña Nadia, the woman of the house, fussed over me like a mother, doing everything she could to make sure I was comfortable. She and her husband, Don Pedro, introduced me to the ritual of drinking Yerba Mate, a popular infusion from the Guarani people who first occupied this territory. They rise early to milk the cows and prepare the day’s “chipa”, yuca and cheese bread, the typical Paraguayan breakfast. They were quite self sufficient–the yuca, a tuber, was grown on their farm, the cheese comes from their cows’ milk, the bread is baked in wood–fueled ovens. The plains of Paraguay, El Chaco, an extension of the Pampas, are perfectly suited for cattle grazing and there is an abundance of meat. 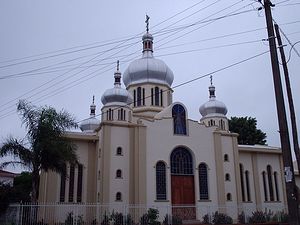 The Orthodox church in Fram.
Encarnacion, Capitan Miranda, Natalio, Coronel Bogado, Nueva Alborada; these are the names of some of the towns we visited. We would go daily to different communities, meeting the governor, mayors and other public officials and, of course, the priests and Church officials. The Orthodox and Roman Catholic Churches are working together to strengthen their combined forces against the influx of uncountable sects and superstitions.

Part of our mission to Paraguay was to distribute books about the history of Orthodoxy and Orthodox prayers in Spanish (Castilian), as they had always associated Orthodoxy with the Ukrainian language. We explained that Orthodox Christianity is for everyone and it should be propagated in the local language. The local young people were very curious about the Orthodox world outside of Paraguay, wondering if the young people have faith or if the churches were closing.

Another experience came when one of the team members mentioned the Jesus Prayer, the Prayer of the Heart. The people were very curious about it. Fr. Demitrio, who is a monk by calling and a priest by duty, took advantage of their attention to explain the practice. He showed them how to position their hands, how to cock their head to one side, toward their hearts. By invoking the name of the Lord, silently repeating the prayer, you feel the presence of God, the Logos and the creative energy of the universe. As homework, the participants were asked to pray for a half hour and the next day for an hour. Then, they would get together and share their experiences. They could feel the calmness immediately. We did this workshop in several places and the results were very exciting.

All in all, the trip was an incredible experience. I could go on and on. I carry the love with which the Ukrainian-Paraguayans received us in my heart and hope to return one day. I met people who helped me to better understand what our Orthodox Christian faith really means. I am grateful to all those who helped make this trip possible, especially to the members of my church and all those who collaborated spiritually as well as tangibly. I believe that this trip taught me much more than what I could have taught them.