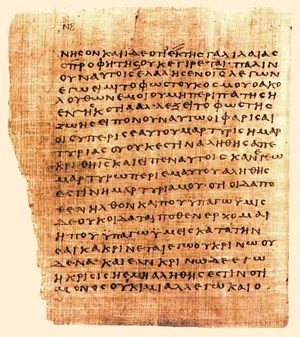 Many skeptics believe that the Bible has been drastically changed over the centuries. In reality, the Bible has been translated into a number of different languages (first Latin, then English and other languages, see History of the Bible). However, the ancient manuscripts (written in Hebrew, Aramaic, and Greek) have been reliably copied over the centuries - with very few alterations.

How do we know the Bible has been kept intact for over 2,000 years of copying? Before the discovery of the Dead Sea Scrolls, our earliest Hebrew copy of the Old Testament was the Masoretic text, dating around 800 A.D. The Dead Sea Scrolls date to the time of Jesus and were copied by the Qumran community, a Jewish sect living around the Dead Sea. We also have the Septuagint which is a Greek translation of the Old Testament dating in the second century B.C. When we compare these texts which have an 800-1000-year gap between them we are amazed that 95% of the texts are identical with only minor variations and a few discrepancies.

Thousands of early Christian writings and lexionaries (first and second century) cite verses from the New Testament. In fact, it is nearly possible to put together the entire New Testament just from early Christian writings. For example, the Epistle of Clement to the Corinthians (dated 95 A.D.) cites verses from the Gospels, Acts, Romans, 1 Corinthians, Ephesians, Titus, Hebrews, and 1 Peter. The letters of Ignatius (dated 115 A.D.) were written to several churches in Asia Minor and cites verses from Matthew, John, Romans, 1 & 2 Corinthians, Galatians, Ephesians, Philippians, 1 & 2 Timothy and Titus. These letters indicate that the entire New Testament was written in the first century A.D. In addition, there is internal evidence for a first century date for the writing of the New Testament. The book of Acts ends abruptly with Paul in prison, awaiting trial (Acts 28:30-31[1]). It is likely that Luke wrote Acts during this time, before Paul finally appeared before Nero. This would be about 62-63 A.D., meaning that Acts and Luke were written within thirty years of ministry and death of Jesus. Another internal evidence is that there is no mention of the destruction of Jerusalem in 70 A.D. Although Matthew, Mark and Luke record Jesus' prophecy that the temple and city would be destroyed within that generation (Matthew 24:1-2[2],Mark 13:1-2[3], Luke 21:5-9,20-24,32[4]), no New Testament book refers to this event as having happened. If they had been written after 70 A.D., it is likely that letters written after 70 A.D. would have mentioned the fulfillment of Jesus' prophecy. As stated by Nelson Glueck, former president of the Jewish Theological Seminary in the Hebrew Union College in Cincinnati, and renowned Jewish archaeologist, "In my opinion, every book of the New Testament was written between the forties and eighties of the first century A.D."

With all of the massive manuscript evidence you would think there would be massive discrepancies - just the opposite is true. New Testament manuscripts agree in 99.5%[5] (5) of the text (compared to only 95% for the Iliad). Most of the discrepancies are in spelling and word order. A few words have been changed or added. There are two passages that are disputed but no discrepancy is of any doctrinal significance (i.e., none would alter basic Christian doctrine). Most Bibles include the options as footnotes when there are discrepancies. How could there be such accuracy over a period of 1,400 years of copying? Two reasons: 1) The scribes that did the copying had meticulous methods for checking their copies for errors. 2) The Holy Spirit made sure we would have an accurate copy of God's word so we would not be deceived. The Mormons, theological liberals as well as other cults and false religions such as Islam that claim the Bible has been tampered with are completely proven false by the extensive, historical manuscript evidence.

[1] And he stayed two full years in his own rented quarters, and was welcoming all who came to him, preaching the kingdom of God, and teaching concerning the Lord Jesus Christ with all openness, unhindered. (Acts 28:30-31)
[2] And Jesus came out from the temple and was going away when His disciples came up to point out the temple buildings to Him. And He answered and said to them, "Do you not see all these things? Truly I say to you, not one stone here shall be left upon another, which will not be torn down." (Matthew 24:1-2)
[3] And as He was going out of the temple, one of His disciples said to Him, "Teacher, behold what wonderful stones and what wonderful buildings!" And Jesus said to him, "Do you see these great buildings? Not one stone shall be left upon another which will not be torn down." (Mark 13:1-2)
[4] And while some were talking about the temple, that it was adorned with beautiful stones and votive gifts, He said, "As for these things which you are looking at, the days will come in which there will not be left one stone upon another which will not be torn down." (Luke 21:5-6)
[5] Metzger, Bruce M. 1992. The Text of the New Testament: Its Transmission, Corruption, and Restoration. Oxford, OxfordUniversity Press.
Comments
×