Homily on the Day of the Apostles Peter and Paul

Their sound went into all the earth, and their words
unto the ends of the world.
Psalm 18:5; Romans 10:18 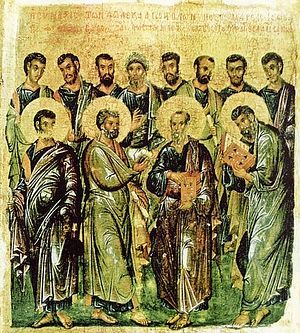 Synaxis of the Twelve Apostles
In order to raise our spirit but a little over the vanity of this world in which it is ordinarily immersed, we shall impress in our minds, brothers and sisters, the image of the holy chief Apostles Peter and Paul, filled with inexhaustible life. Their souls represent an equally abundant treasure house of spiritual virtues for us, who are in but small measure participants in the Divine life that was revealed through the appearance of God in the flesh.

Both equally hazarded their lives (Acts 15:26) for the word of God, and to witness the name of the Lord Jesus Christ, desiring to shepherd the sheep of Christ's flock and betroth to Christ a Church made of pagans who were redeemed by His blood. One, a rock of faith, strengthened his brethren (cf. Lk. 22:32) who were scattered in their fear of persecution for the name of Christ after His resurrection, and first explained how God willed that to the Church, hitherto composed only of the sons of Israel, should be united those pagans who converted (Acts. 15:7–11). The other, a chosen vessel (Acts 9:15) to bear the name of Christ to peoples who had not yet heard of Christ (Rom. 15:20–21), travelled with words of preaching to nearly all the known inhabited world, so that the words be fulfilled, Rejoice, thou barren that bearest not (Gal. 4:27; Is. 54:1) and Be glad, thou thirsty desert: let the wilderness exult (Is. 35:1)—the hearts of the pagans. Both were equally filled with love for Christ, dedicated their whole lives to preaching the Word and to apostolic labors, and both sealed their love for Christ with a martyr's death. One, having first denied Christ, followed Him for the rest of his life in repentance, as if on the crucifix, enduring fiery temptations and satan's calumny (1 Pet. 4:12; 5:8), in order to fulfill what Christ had said to him: Follow Me (Jn. 21:19). The other, called from amongst the persecutors, counted all things as dung, that he might win Christ (cf. Phil. 3:6–8), and desired to be accursed from Christ that he might bring to Him his brothers in the flesh—Israel (Rom. 9:3), until he finished his course by martyrdom in order to receive a crown of righteousness (cf. 2 Tim. 4:6–8).

Both left the their writings to the churches that came after them from those they had founded, and these writings were full of edification, in which the spirit still lives for all who read and hear them. One by his writings strengthens the faith of those who are weakened by the temptations sent to purify us (cf. 1 Pet. 4:12). Another reveals an inexhaustible wealth of wisdom and knowledge, contained in Christ for all nations (Col. 2:3; Eph. 3:8).

Clearly, brothers and sisters, these images should always be alive in us of the Apostles who enlightened the whole world with their teachings, and brought all the ends of the earth, which means even us, to Christ.

But do we see this in actuality? How few of us read their epistles, and how few of us strive to understand them! How often and with what indifference do we abandon the word of God, which is quick, and powerful, and sharper than any twoedged sword, piercing even to the dividing asunder of soul and spirit, and of the joints and marrow, and is a discerner of the thoughts and intents of the heart (Heb. 4:12), and turn to earthly wisdom, the rudiments of the world (Gal. 4:9; Col. 2:8), which does not in the least reveal to us the divine wisdom hidden throughout the world and in the life of mankind! Doesn't it also happen that these words of the Apostles are even laughed at amongst us, just as they were amongst the sophists and philosophers of Athens, from whom the Apostle Paul departed with a heavy spirit, to preach in other cities (Act. 17:18, 32–33; 18:1 1 Col. 3:1–7)? Aren't the preachers of these words of the Apostles also subjected even now to persecutions, even unto bonds, like the great Apostle of Christ, Paul (2 Tim. 2:9)? Isn't the reason why unbelief is increasing in our time: that we do not want to hear and know about that living, fiery faith, which comes not from opinion or the logic of flesh and blood, but from heavenly, divine revelation (Mt. 16:17), as did the rock, Simon Peter? Is the reason why Christian love is becoming more and more scarce among people that we have completely forgotten Paul, whose mouth was always opened unto the people, and whose heart was enlarged (cf. 2 Cor. 6:11), in order to embrace with tender love all those whom he begot in the Gospels through Christ Jesus (1 Cor. 4:15)? As long as the earth stands, it will stand only on twelve foundations, which are the Apostles of Christ (Rev. 21:14; Eph. 2:20). But if instead of approaching Christ, the Chief Cornerstone, and as lively stones, are built up a spiritual house, an holy priesthood (1 Pet. 2:5), we build upon a foundation other than Jesus Christ, then each one's work will be revealed by fire; and the fire shall try every man's work of what sort it is (1 Cor. 3:11-13), and the fire from which the present world shall perish (cf. 2 Pet 3:7-12) will destroy it more and more, so that new heavens and a new earth, wherein dwelleth righteousness (2 Pet. 3:13) might appear.

Thus, as long as the Lord delays His coming, let us be filled with fear before Him, so that at least that fear might arouse us to live a pious and holy life (cf. 2 Pet. 3:9–11), if we are not yet inspired by love for our Redeemer, the Lord Jesus Christ, Who brought Himself as a merciful sacrifice for our sins (cf. Rom. 3:25).

Filled with ineffable spiritual beauty, the image of the holy chief Apostles will always be powerful to support us in the temptations that beset us, and to fill us with love of God, if only we would desire to seek their support for us. By reading their epistles often, we will always find in them abundant food for thought and spiritual contemplation, and a source of higher joy as we observe the sorrowful, woeful manner of life in this world. We will attain an as if prophetic sight into the future of Christ's Church—as long as it stands on the earth, as long as the sound of these Apostles is heard in the world, and their words are treasured. Amen.