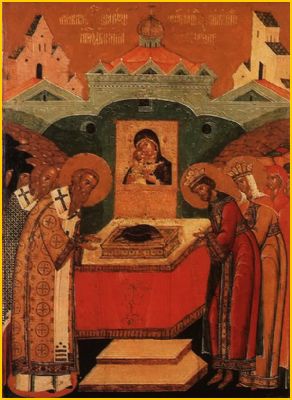 During the reign of Byzantine Emperor Leo the Great in the early fifth century, the brothers Galbius and Candidus traveled from Constantinople to Palestine to venerate the holy places. They stayed in the home of an old Jewish woman in a small settlement near Nazareth. They noticed a room in her house where many lamps were lit, incense burned, and sick people were gathered. When they asked her what the room contained, the pious woman did not answer for a long time. After persistent requests, she said that she had a very precious sacred item: the Robe of the Mother of God, which performed many miracles and healings. Before Her Dormition, the Most Holy Virgin bequeathed one of her garments to a pious Jewish maiden, an ancestor of the old woman, instructing her to leave it to another virgin after her death. Thus, the Robe of the Mother of God was preserved in this family from generation to generation.

The jeweled chest, containing the sacred Robe, was ultimately transferred to Constantinople. St. Gennadius, Patriarch of Constantinople, and Emperor Leo, having learned of the sacred treasure, were convinced of the incorrupt state of the holy Robe, and they certified its authenticity. At Blachernae, near the coast, a new church in honor of the Mother of God was constructed. On June 2, 458, St. Gennadius transferred the sacred Robe into the Blachernae church with appropriate solemnity, placing it in a new reliquary.

Afterwards, the outer robe of the Mother of God and part of Her belt were also put into the reliquary. This event also influenced the Orthodox iconography of the Feast, in connecting the two events: the Placing of the Robe, and the Placing of the Belt of the Mother of God. A Russian pilgrim, Stephen of Novgorod, who visited Constantinople in 1350, testified: “We arrived at Blachernae, where the Robe lies upon an altar in a sealed reliquary.”

More than once, during the invasion of infidels, the Most Holy Theotokos saved the city to which She had given Her holy Robe – during the time of a siege of Constantinople by the Avars in 626, by the Persians in 677, and by the Arabs in 717. Especially relevant are the events that took place in 860, which are intimately connected with the history of the Russian Church.

On June 18, 860, the Russian fleet of Prince Askold, a force comprising more than 200 ships, destroyed the coastal regions of the Black Sea and the Bosphorus, then entered the Golden Horn and threatened Constantinople. The Russian ships sailed within sight of the city, setting ashore troops who “proceeded before the city, stretching forth their swords.” Emperor Michael III interrupted his campaign against the Arabs and returned to the capital. All night he prayed, prostrating himself upon the stone tiles of the church of the Mother of God at Blachernae. Patriarch Photius spoke to his flock, calling for tears of repentance to wash away their sins and to seek the intercession of the Most Holy Theotokos with fervent prayer.

The danger grew with each passing hour. “The city was barely able to stand against a spear,” wrote Patriarch Photius in one of his homilies. Under these conditions the decision was made to save the church’s sacred objects, especially the holy Robe of the Mother of God, which was kept in the Blachernae church, not far from the shore.

After serving an all-night Vigil, and taking it out from the Blachernae church, the sacred Robe of the Mother of God was carried in a procession around the city walls. Its edge was dipped into the waters of the Bosphorus, and it was then carried to the center of Constantinople to the church of Hagia Sophia. The Mother of God protected the city and turned back the Russian warriors. An honorable truce was concluded, and the siege of Constantinople was lifted.

On June 25 the Russian army left the city, taking with them a large tribute payment. A week later, on July 2, the wonderworking Robe of the Mother of God was solemnly returned to its place in the reliquary of the Blachernae church. In remembrance of these events an annual feast day of the Placing of the Robe of the Mother of God was established on July 2 by Patriarch Photius.

In October-November, 860, a Russian delegation arrived in Constantinople to conclude a treaty “in love and peace.” Some of the conditions of the peace treaty included articles concerning the Baptism of Kievan Rus, the payment of an annual tribute by the Byzantines to the Russians, permission for them to serve with the Byzantine army, an agreement to trade in the territory of the Empire (primarily in Constantinople), and to send a diplomatic mission to Byzantium.

Most important was the Baptism of Rus. The writer of the Byzantine “Theophanes Chronicles” related that “their delegation arrived in Constantinople with a request for them to receive holy Baptism, which also was fulfilled.” An Orthodox mission was sent to Kiev to fulfill this mutual wish of the Russians and the Greeks. Earlier, in 855, St. Cyril the Philosopher had created a Slavonic alphabet and translated the Gospel. St. Cyril was sent with his brother, St. Methodius, on a mission to Kiev with books translated into Slavonic. This was at the initiative of St. Photius. The brothers spent the winter of 860/861 at Cherson, and in the spring of 861 they were at the River Dniepr, with Prince Askold.

Prince Askold was faced with a difficult choice, just as holy Prince Vladimir faced – the Jews and the Muslims wanted him to accept their faith. However, under the influence of St. Cyril, the prince chose Orthodoxy. At the end of 861, Sts. Cyril and Methodius returned to Constantinople and carried letters with them from Prince Askold to Emperor Michael III. Askold thanked the emperor for sending him “such men, who showed by both word and by example, that the Christian Faith is holy.” “Persuaded that this is the true Faith,” Askold wrote, “we bid them to baptize in the hope that we may also attain sanctity. We are all friends of the Kingdom and prepared to be of service to you, as requested.”

Askold accepted holy Baptism with the name Nicholas, and many of his retinue were also baptized. Directly from Constantinople, the capital of Orthodoxy, through the efforts of the holy Apostles to the Slavs both the Slavonic divine services and the Slavonic written language arrived in Rus.

St. Photius appointed Metropolitan Michael to Kiev, and the Russian metropolitan district was entered into the lists of dioceses of the Patriarchate of Constantinople. Patriarch Photius in an encyclical in 867 called the Baptism of the Bulgarians and the Russians as among the chief accomplishments of his archpastoral service. “The Russians, who lifted their hand against the Roman might,” he wrote, almost quoting literally from the missive of Askold, “have now replaced the impious teaching which they held to formerly, with the pure and genuine Christian Faith, and with love having established themselves in the array of our friends and subjects.” (The Byzantines counted as “subjects” all accepting Baptism from Constantinople and entering into military alliance with the Empire.) “The desire and zeal of faith has flared up within them to such an extent, that they have accepted bishops and pastors, and they embrace Christian sanctity with great zeal and fervor.”

The Feast of the Placing of the Robe of the Most Holy Theotokos in Blachernae also marks the canonical establishment of the Russian Orthodox metropolitanate in Kiev. By the blessing of the Mother of God and by the miracle from Her holy Robe not only was the deliverance of Constantinople from the most terrible siege in all its history accomplished, but also the liberation of the Russians from the darkness of paganism to life eternal. Together with this, 860 brought recognition to Kievan Rus from Byzantium.

Several outstanding works of Byzantine Church hymnology and homiletics are connected with the miracle of the Robe of the Most Holy Theotokos at Blachernae. There are two homilies of St/ Photius, one of which he preached within days of the siege of Constantinople, and the other soon after the departure of the Russian forces. Also associated with the campaign against Constantinople is the composition of a remarkable “Akathist to the Most Holy Theotokos,” which certain Church histories ascribe also to Patriarch Photius. This Akathist forms an integral part of the services of Praise to the Most Holy Theotokos (the “Saturday of the Akathist” on the Fifth Saturday of Great Lent).

The veneration of the feast of the Placing of the Robe was long known in the Russian Church. St. Andrew Bogoliubsky built a church in honor of this feast day in the city of Vladimir at the Golden Gates. At the end of the 14th century, part of the Robe of the Mother of God was transferred from Constantinople to Russia by St. Dionysius, Archbishop of Suzdal.

The holy Robe of the Mother of God, which previously saved Constantinople, later saved Moscow from invading tribes. Tatars of the Horde of Prince Mazovshi approached the walls of Moscow in the summer of 1451. St/ Jonah, Metropolitan of Moscow, with constant prayer and church services, encouraged the defenders of the capital. On the night of July 2, great confusion occurred within the Tatar camp. The enemy abandoned their plundered goods and speedily departed. In memory of the miraculous deliverance of Moscow, St. Jonah built the church of the Placing of the Robe in the Kremlin, making it his primary church. It burned, but in its place a new church was built in 1484-1486, also dedicated to the Feast of the Placing of the Robe of the Mother of God. This temple, which still stands, continued to serve as the primary church of Russian metropolitans and patriarchs until the Cathedral of the Twelve Apostles was built under Patriarch Nikon.

Ever-Virgin Theotokos, protectress of mankind,
you have given your people a powerful legacy:
the robe and sash of your most honored body,
which remained incorrupt throughout your seedless childbearing;
for through you time and nature are renewed!
Therefore we implore you:
“Grant peace to your people and to our souls great mercy!”

O Pure One, full of the grace of God,
you have given your sacred robe as a garment of incorruption to all the faithful,
with it you covered your holy body, O divine protection of all mankind.
We celebrate its enshrinement in Blachérnae with love and we cry aloud with awe:
“Rejoice, O Virgin, boast of Christians.”