Athlete of Virtues—St. Sergius of Radonezh 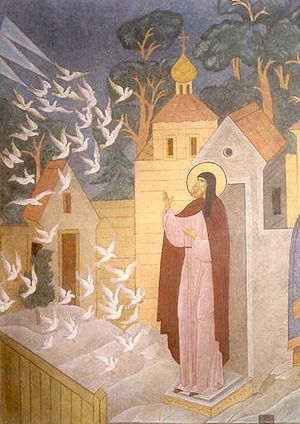 St. Sergius and the doves.
The lives of the saints as well as their writings are one of the ways that we learn about the spiritual life. In reading attentively the lives of saints, one of the first things we learn is that the saints are neither distinctively Russian or Greek (nor any other nationality); they are at all times Orthodox and Christ-loving. They breathe forth the same spiritual fragrance no matter when or where they lived.

One of the most beloved Orthodox saints of Russia is St. Sergius of Radonezh whose life for countless generations of pious Orthodox, both young and old, served as a source of spiritual nourishment. And so it can for us, if only we read it not so much with our minds, as with our hearts.

A Greek bishop, a contemporary of St. Sergius, doubted the many reports he had heard concerning the saint's sanctity and said: "Can there be such a lamp in this land and in these latter times?" Desiring to see for himself, he set out for St. Sergius' monastery, but "no sooner had he seen the Saint when he was struck blind. The Saint took him by the hand to his cell, and there the bishop confessed his unbelief and begged with tears for healing. The Saint touched his eyes and healed him, exhorting him not to come tempting the simple monks again. The bishop, now enlightened, spoke loudly everywhere about having seen a true man of God, a heavenly man and earthly Angel."

How many of us approach the reading of lives of saints, our minds clouded by doubt, skeptical about the miracles and thus blind to the treasure of holiness which they contain? Let us heed the example of the Greek bishop and beg God to open our mind's eye, for only in this way shall our reading of these lives be spiritually fruitful.

St. Sergius was born in 1314 in Rostov of pious and devout parents. Even before his birth, God worked a miracle upon the future saint: while still in his mother's womb he cried aloud three times during the Divine Liturgy. His biographer says that from this moment his mother "carried the child in her womb as if it were a precious treasure... She guarded herself from every stain of sin, observing a fast."

Baptized with the name Bartholomew, the growing boy was a poor student, unable to learn how to read. He often prayed to God in secret: "O Lord, give me understanding of learning !" One day he met in the fields a holy elder of angel-like appearance who asked, "What are you seeking, my child?" The boy replied that he wished most of all to read and write. Assuring him that for his faith the Lord would give him learning, the elder at the boy's entreaty accompanied him to his parents' house. They all went into the house chapel and the elder told the boy to read aloud from the Psalter. "Father, I do not know how," Bartholomew said. But after the eder commanded him to "Speak the word of God without doubt," the boy began to read easily. Then the elder foretold to the parents that their son would be a dwelling of the Holy Trinity, that he would be great before God and man, and that he would-direct others thanks to his virtuous life.

Some time later it fell on Bartholomew to care for his parents in their old age, a task he willingly undertook, although he wanted to" become a monk. After his parents died he abandoned the world, and together with one of his brothers, went deep into the forest to build a cell and a small church, dedicated to the Holy Trinity. His brother was unable to remain long with him, so Bartholomew continued in the forest alone, At the age of 23 he received the monastic tonsure with the name Sergius.

Late one night when the Saint was praying, he heard a voice calling. ' 'Sergius, "Opening the window of his cell he beheld a marvelous vision . . . an extraordinary radiance shone in the heavens and a multitude of beautiful birds filled the air.

He was troubled by wild animals—especially bears. "One bear in particular would come to the Saint. Seeing that the animal came only to get some food, the Saint would place a small slice of bread on a log.... Often there was no bread, and both he and the bear would go hungry. Sometimes the Saint would give his only slice to the bear, being unwilling to disappoint him. Let no one be astonished at this, knowing certainly that when the Holy Spirit dwells in a man, the creatures become submissive to him, just as to first-created Adam in the beginning."

After two years, God-fearing monks came to dwell with St. Sergius. Although he had gone to the forest to work out his salvation in solitude, St. Sergius accepted their arrival as God's Providence and said to them, "Know that if you have come to dwell in the wilderness, the beginning of righteousness is the fear Of the Lord."

Each monk built his own cell, and all gathered with the Saint for the Divine services in the chapel. A priest came from a village for Divine Liturgy until, finally, the Saint was persuaded to accept ordination at which time the bishop also named him abbot and exhorted him to '"Remember this saying: "Bear ye one another' s burdens and so fulfill the law of Christ" (Gal. 6:2). If you follow this precept, you will save yourself and those who live with you.' St. Sergius remembered this all his life and was not only a father but also a servant to all those who came to him."

St. Sergius worked at grinding grain, baking bread, cooking food. and making candles, as well as making shoes and clothing for the other monks. "He never spent an idle hour. Remaining thus in ceaseless prayer and labors, he completely wore out and refined his flesh, having the Constant desire to be a citizen of the Jerusalem that is above." Over and over he reminded his monks: "God's grace cannot be given without trials; after tribulation comes joy.

Multitudes flocked to him, wishing to be part of this growing family of monks. When dissensions arose, the Saint did not enter into them, preferring, as when the monks would not accept correction, to be silent rather than participate in any strife.

Once after prayer before an icon of the Mother of our Lord Jesus Christ, a dazzling radiance shone upon him and he beheld the Most Pure One, together with the Apostles Peter and John. The bright light of the vision was unbearable, and he fell to the ground. But the Mother of God, touching him, promised that she would be with his monastery during his life and afterwards, protecting it.

"Continually chastening himself with fasting, working unceasingly, performing numberless miracles, the Saint reached advanced age .... The older his body grew, the stronger grew his fervor, in no way weakened by age." With the approach of death (which he foreknew) he gathered his flock and delivered a final exhortation. "He made them promise to be steadfast in Orthodoxy and to preserve oneness in mind with each other; to keep pure in body and soul and to have unhypocritical love; to avoid all evil and carnal lusts; to be moderate in food and drink; above all, to be clothed with humility; not to forget love of strangers; to avoid back-talk, and on no account to set value on honor and praise in this life, but rather to await reward from God in the joys of heaven and eternal blessings."

"He surrendered his pure, holy soul to the Lord, in the year 1392, on September 25, being 78 years of age. after his death the Saint's body gave off an ineffable, sweet fragrance .... His face shone white as snow .... Angels preceded him after his repose and opened for him the doors of Paradise and—what he had always desired--the illumination of the Most Holy Trinity."

The Mother of God has kept her promise to St. Sergius. His monastery was one of the last to remain open under the Soviet Yoke, and countless pilgrims still come to venerate his holy and incorrupt relics.

So remarkable is the life Of this wondrous Saint, so full of miracles, that we tend to overlook those points which, with prayer, can be applied to our own circumstances. Even his childhood gives a picture of an exemplary Christian life. How many contemporary mothers are so solicitous over the spiritual needs of their children even while they are still in the womb? How many of us turn first to God in time of need and teach our children to do likewise? And how many young people of today sacrifice their own desires in order to care for their parents in their old age? And who among us can afford to disregard the Saint's example of constant labor even at "menial" tasks? Furthermore, while our society places such a high value on secular education (and even theological degrees) can we not see from this life that it is not so much the reading of books which we must cultivate, but rather the fear of God and the practice of His commandments? If only we would be more inclined to follow the example of St. Sergius. In his book on this Saint Pierre Kovalevsky writes:

"Throughout his life he remained a man for whom the Christian experience was more important than learning or reason. He never wrote anything, and he drew his knowledge not from reading but from his continual communion with God. His vocation was not to speculative theology but rather to the application of the Gospel's precepts."

Note: This is an especially good life to retell to our children (see "Parents, Children and Lent", p. 6). Explain to them that St. Sergius is called (in his troparion), an "athlete of virtues" because those who exercise, or practice, the virtues are just as much in training for a competition or contest as modern-day athletes in the sports arena. The difference is that whereas the merely physical athlete competes for an earthly, passing glory, the "prize" for a spiritual athlete is the unending bliss of Paradise.