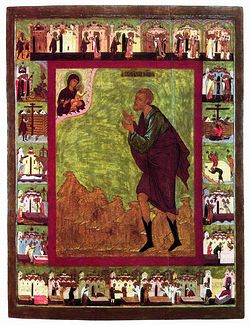 Icon of St. Procopius of Ustiug, with life.
Saint Procopius was a German Catholic. He was running a merchant business in Novgorod when he became enraptured by the beauty of the Orthodox services. He converted into Orthodoxy, gave his wealth and possessions to the indigent and became a monk at the Saint Varlaam-of-Khutyn monastery outside Novgorod. After some time shunning from fame he left for Ustiug where Procopius chose to accomplish the ordeal of God's fool pretending to be a fool in order to attain utmost humbleness and humility. Thus he became the first fool-for-Christ-sake in Russia. He had to go through many afflictions accomplishing this hard feat. Carrying three wooden staffs he walked barefoot and poorly dressed all year round. He slept on church porches or simply on the ground. He would take alms from the compassionate simple people, but he would never accept any charity from the rich, whom he considered obtained their possessions by unrighteous ways; even though this would cause him to go hungry for several days.

One fiercely cold day when even birds got frozen in flight, the Blessed God's fool was looking for shelter, but no one let him in. He wanted to warm himself up by lying next to some dogs, but they ran away. Procopius was freezing to death. Suddenly he felt a wave of heavenly warmth and a touch of an angel on his face. That gave the Blessed Fool-for-Christ-Sake warmth and strength. He related this miracle to a cathedral cleric Simeon and asked him not to tell anyone about it before his death.

The gift of clairvoyance was endowed on the God's fool for all his sufferings and feats. Once he bowed to a three-year-old girl and said to her mother, "This is a mother of a great saint." That girl became the mother of prelate Stephen-of-Perm.

In the year1290 Procopius was going about the town for a week appealing to the citizens to repent and pray to God for deliverance from the fate of Sodom and Gomorra (Gen. Chapter 19). Nobody believed him. Suddenly a somber cloud appeared in the sky and was growing bigger and bigger, turning the day into night. A terrible storm with lightning and roaring thunder shook the walls of the buildings. It was so strong and loud that people could not hear each other. The premonition of doomsday overwhelmed people. They rushed to the cathedral where the Blessed was already praying before the icon of the Annunciation of Theotokos. Then everybody witnessed a miracle; chrism started flowing from the icon as a sign of mercy granted to the town by the Theotokos. The chrism was so abundant that people could fill the cathedral's vessels. Those anointed got cured from various diseases. Then the stifling air turned fresh and the sun appeared in the sky. At the natural boundary of Kotovalski, 20 miles away from Ustiug, the dark clouds broke out with such hail and lightning that a century old forest was demolished, while neither people nor cattle were injured. To commemorate this wonder of deliverance from death, the holiday of the Ustiug icon of Theotokos was established.

Everything the saint did and every word he said when talking to virtuous people was full of exhortations and admonitions. The righteous Procopius passed away at a very old age in 1303 at the gate of the Arkhangelsk monastery. Many wonders were witnessed to occur over his grave, and there were accounts of his apparitions.

Enlightened by the God's grace to heavenly wisdom, having withdrawn your mind from earthly vanity Thou were giving it adamantly through your heart to the Giver of life. Undefiled life of tolerance and purity has thou lived and passed away preserving the virtuous faith. After death let us see the light of thy life, as thou art imparting wonders from the source inexhaustible upon the believers who come to thy sacred grave, Oh, all-blessed Procopius, pray Christ our God that He may save our souls.