God is Where There is Humility. From the spiritual instructions of Elder Arsenie (Papacioc)

Archimandrite Arsenie (Papacioc), was one of the oldest and most respected of the elders still living in Romania. He was a representative of that golden pleiade of Romanian spiritual fathers of the twentieth century who have no equal in their fervency of faith, and experience in asceticism in the austere conditions of an uninhabited desert. He is like an abba of the ancient patericons, possessing experience combined with spiritual wisdom, a refined understanding of the secrets of the human soul, and a remarkable literary gift. Elder Arsenie labored in asceticism in the impenetrable forests of the Romanian mountains, together with Fr. Cleopa (Ilie), was persecuted by the god-hating authorities, and was imprisoned for his faith. He was the father-confessor of the monastery of St. Mary in Tekigroul, near Constanci. The wise Romanian elder, who would have turned 97 on August 11, 2011, reposed in the Lord on July 19, 2011.

The following questions were asked of the elder by Archimandrite Ioannichie (Balan; 1930­–2007)—a talented spiritual writer and poet, author of the Romanian Patericon, and co-ascetic and biographer of Elder Cleopa (Ilie). 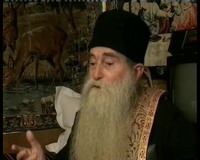 Elder Arsenie (Papacioc)
—Fr. Arsenie, tell us, how can we be saved from our many earthly cares, so that we might have more time for prayer?

—Fr. Ioannichie, pure prayer from the heart and lips to God is a great work! Prayer is a sharp arrow that all the saints have aimed at heaven for thousands of years, and not only they, but also the simplest Christians. Prayer has pierced the heart of the heavens, perhaps it has reached those who were displeased with the earth's inhabitants, and salvific replies have returned along the same path; thus was faith preserved on earth from generation to generation.

Brother Christian, you also have your own history: you have entered into the great Christian union—the Church—and are forever redeemed by the Savior's sacrifice. That means that you are of great worth, and you have a great and noble responsibility. Is it so difficult for each of us to simply and directly ask God to help us in our troubles and sufferings, and to thank Him?!

Where is the man who has nothing to ask of our Lord Jesus Christ and the Mother of God? They say that the Mother of God is offended by those who never ask her for anything! She is the prayerful intercessor for people; and as much as God can do through His power, so much can the Mother of God do by Her prayer. Show that you are the child of the Mother of God, having a child's heart in your breast!

And we can be free of earthly cares only if we want to be—after all, our salvation depends upon us. As souls given by God, we must show more will, in order not to immerse ourselves in these earthly cares and burden ourselves with them to such an extent. We shall manage our lives as people of higher thought, and as responsible human beings. If we were to ask those who are saved and living in heaven, "What did it cost you to attain such blessedness?" they would reply, "Time, a little time well spent on the earth!" That means that we have absolutely no other time to bring our souls to perfection—souls that are called, gifted, and full of such resolve.

We must think about the fact that we are called "the angelic ranks" [the monastic rank is called the angelic rank. –OC]. Angels pray unceasingly, throughout eternity.

—What is the easiest way to overcome in the struggle against fornication and fleshly thoughts?

—In order to overcome in the struggle against fornication, in whatever stage it may be, we must first of all ask for grace from the Good God. This is not a short term battle, because we must definitely achieve total victory. At first, each one sees that he is powerless to withstand it; but with God all things are possible.

He who enters into this struggle must:

–want to be freed of this struggle, no matter what happens;

–pray with all his heart to the Mother of God, and ask her help;

–avoid, as much as possible, all circumstances that might arouse passions;

–do not accept into your mind those suggestions that might seem innocent, but then begin to solidify into images. Route all these thoughts, changing your mind to prayer—but your own prayer, and not something someone else recommended, no matter who that might be; into prayer with your own sighing, even if it is without words.

If the attack is aggressive, pleasurable, and vanquishing, one must call out to the Mother of God, and not give in. During the first phases, he should confess contritely and purely, not sparing himself and not blaming incidents, circumstances, or other individuals. He will be greatly helped if he goes to confession often. 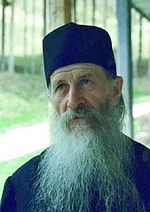 Fr. Ioannichie (Balan)
The father-confessor will understand him, console him, and assure him that he is not alone, yet not allow him to harden in his motivations, as if it were all "necessary and perfectly natural."

The father-confessor should have zeal and kindness in order to be able to tear his spiritual child away from this secret and many-headed passion. It is recommended to read books and everything that has as its goal the preparation for death. The lost one will be forgiven through repentance, no matter what sin he committed, and this will be a great achievement; but let no one deceive himself or suppose that he can find any forgiveness without repentance. Because of this sin, you cannot ever know what heaven and hell really are; and one should think about this and pray.

A person who is more spiritually inclined, but nevertheless gets wounded to a greater or lesser extent and then passes through the bath of repentance, counts this as a misfortunate accident. He will have a serious reason for truly meek humility—and this gives God more joy than when someone thinks highly of himself as never having fallen.

This is not a paradox, but divine justice and mercy. He, the Master of the house and Good Pastor, left his sheepfold of sheep and went to find the lost sheep, and then happily put it on His shoulders and carried it into the gates of the Kingdom of glory. I once read what I am telling you now: "Brother Christian, believe me, there are two kinds of joy, which cannot be combined—you cannot rejoice here on earth in pleasures that are transient and sinful, and then reign with Jesus Christ." "Then, iniquity will stop its mouth" (cf. Ps. 106:42). "Thou fool, the time that you use for evil digs a pit for you, and tomorrow eternity will come!" Saying this, I think that the father confessor can encourage the person who is struggling with onslaughts from without, and with nature from within.

—How can one conquer and route ambition and prideful thoughts from himself?

—A hideous and impure passion! All evil catches a fish in this murky water! God does not even want to hear about a proud person! He takes all grace away from him, so that he might stumble—maybe then he will become humble, as the Scripture says (cf. 1 Pet. 5:5).

He abandons him, and that person becomes a great abomination; He takes from him all sense of beauty, leaves him to roam around in chaos, in all manner of filthy back alleys of the world. He has no image, or likeness, or healthy reason. The holy fathers say truly, "Wherever there was a fall, pride first did its work." No other passion will liken you to a devil like pride.

All passions can, let's say, be excused due to nature and bad life circumstances; but pride cannot be justified by anything! It has an unbearable insolence—it attaches itself to any virtue if it can, and it even hides behind humility, which serves as its shield. We see this very often, and to prove what I am saying, it is as one father said: "That proud one is so humble!"

Because it is so dangerous and so broadly present in all ages and ranks, it would be good if no one would disdain any person, no matter how unimportant he may be—for Christ is within him—and would even ask his opinion, even if it is for a lark. This would be the first step, one length along the path of the Gospels.

It would be good to ask everyone's opinion, no matter who you are; for who knows? After all, God's grace rests more often upon the simple and unnoticed. Make a prostration, as they say, if only for the sake of humbling the body—for this also shows good manners—and you will see how much you need these people with whom God has assigned you to live. You will see, and will be convinced in life that wisdom really does abide more in places where there is humility—for God is there.

Lucifer fell irreparably; his grandiose fall happened due to one word only: "I". Having fallen, he became an adversary for eternity, an abomination of desolation. Let no one be deceived, thinking that without true purification in the only water of humility he can enter into the Kingdom from which the angels fell!

These are, in brief, my thoughts and exhortations about this, so that one might realize that God created us beautiful only for Himself!

—What can one do to restrain the tongue and acquire the gift of silence?

—This is truly a serious matter—to not be the master of your tongue. As the saints say, "The tongue leads us to great falls." More vanity than benefit comes from loquacity, and malignant gossip brings great danger not only in this world, but also in the next. They say that most of the people in hell are those who murdered with malicious words!

Brother, you must love you brother. Isn't this the Savior's most important commandment? He gave this commandment as the crown of all His teachings—that the only way to salvation is love; and He ascended the unforgettable and soul-rending Golgotha!

We must always reiterate to people the responsibility that we bear for our lifetime, the only time given to us, so that we would set a lock upon our tongue and purify our hearts from evil. St. Gregory the Theologian says: "We must answer for every superfluous word, even more so for every shameful word"; how much more horribly for every murderous word! The Patericon is very useful in this regard with its chapter on "The benefit of silence."

St. Isidore of Pelusium says, "Speaking with benefit is a blessing, but if it is reinforced by deeds, it is crowned." "For life without words brings greater benefit, while a commanding word evokes anger. If word and life are united they comprise the personification of all philosophy."

Treasure the Lord in your heart and let your attention abide there, and remain there before the Lord without leaving. Then you will notice every speck of dust in yourself. This is how mystical knowledge begins. It is a mirror for the mind and a lamp for the conscience. It dries up lust, extinguishes rage, humbles anger and disperses sorrow, tames insolence, scatters despondency, gives clarity to the mind, casts out sloth, truly humbles you and makes your reason undeceivable; it wounds the demons, and purifies the body. Such a person is no longer the participant in any wicked deed, but rather is alien to it. He thinks all the time, "Who shall I go to? I am a worm…" This is something different, having to do with remembrance of death and man's eternal lot, and belongs to mystical knowledge.