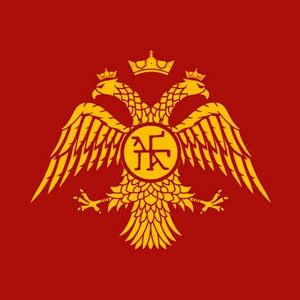 The author, Archpriest Vladislav Tsypin, is a professor at the Moscow Theological Academy, teaching the History of Europe, Ecclesiastical Law, the History of the Russian Church, and the Canons of the Ecumenical Councils. He holds a masters degree in Theology, and a doctorate in Church History.

The term "Pentarchy" arose in connection with the evolvement of ecclesiastical order during the era of the Ecumenical Councils, and specifically in connection with the development of the Patriarchates. During the fifth century, the primates of the largest local Churches began to be ordinarily given the title of Patriarch. Incidentally, the word "Patriarch" in ecclesiastical sources regarding bishops, was first used by the end of the fourth century, albeit without an unambiguously fixed meaning. Thus, according to the Church historian Socrates Scholasticus, the fathers of the Second Ecumenical Council entrusted the canonical care for separate regions of the eastern half of the Roman Empire to bishops whom it names "Patriarchs":

"Then too patriarchs were constituted, and the provinces distributed, so that no bishop might exercise any jurisdiction over other churches out of his own diocese: for this had been often indiscriminately done before, in consequence of the persecutions. To Nectarius therefore was allotted the great city and Thrace. Helladius, the successor of Basil in the bishopric of Caesarea in Cappadocia, obtained the patriarchate of the diocese of Pontus in conjunction with Gregory Basil's brother, bishop of Nyssa in Cappadocia, and Otreius bishop of Melitina in Armenia. To Amphilochius of Icononium and Optimus of Antioch in Pisidia, was the Asiatic diocese assigned. The superintendence of the churches throughout Egypt was committed to Timothy of Alexandria. On Pelagius of Laodicea, and Diodorus of Tarsus, devolved the administration of the churches of the East; without infringement however on the prerogatives of honor reserved to the Antiochian church, and conferred on Melitius then present." (Socrates Scholasticus, Historia Ecclesiastica, [Philip Schaff, NPNF V2-02], 122).

But the word "Patriarch" had not yet become an ecclesiastical title.

Probably, the first official document in which the word "Patriarch" is used as the highest hierarchical title is the Constitutions of Xenon from the year 477 AD.—at any rate, this is the earliest of any preserved official acts in which the patriarchal title is fixed. In the canons, the title of Patriarch appears two centuries later, first in canon seven of the Council of Trullo (691), the subject of which had no connection whatsoever with the characteristic meaning of the Patriarchal rank: "A deacon in the execution of his office, if he shall have occasion to sit in the presence of presbyters, shall take the lowest place unless he be the representative of the Patriarch or bishop." By then, the patriarchal title was held by chief hierarchs of five local Churches of: Rome, Constantinople, Alexandria, Antioch, and Jerusalem. Moreover, the papal title was used with regard to the bishops of Rome and Alexandria on an equal basis with the patriarchal title.

The development of Patriarchates came as the next and historically final step on the path of consolidating local church formations. This step preceded the unification of the Churches, headed by metropolitans and having autocephalous status, in the Exarchates. Although the word "exarch" is first seen in the canons as early as in the sixth canon of the Council of Sardica (the rank of exarch was, of course, known earlier as well, but it was only applied to persons vested with civil authority); nevertheless, it does not have here any particular, independent meaning, being another name for the same metropolitan. But this term is used in the ninth and seventeenth canons of the Council of Chalcedon, but now with another, new meaning: "And if any one be wronged by his metropolitan, let the matter be decided by the exarch of the diocese or by the throne of Constantinople, as aforesaid" (Canon 17). 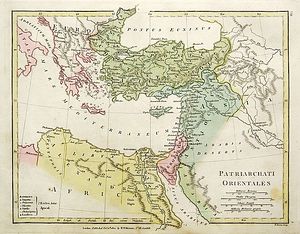 Map of the Justinian Pentarchy.
The appearance of Exarchates was connected with the development of the administrative division of the Roman Empire itself, for the process of Church centralization was aimed at bringing the Church organization into coordination with the new administrative divisions that developed in the fourth century. During the time of Equal-to-the-Apostles Emperor Constantine the Great, the empire was divided into four prefectures: Gallia, Italia, Illyricum, and the East, which was the largest of them all. Furthermore, the two capitals—Rome and Constantinople (the New Rome)—had special status and were not included in these prefectures, having their own city prefects. The Prefecture of Gallia included Gallia, Britannia, Hispania, and Mauretania; Italia included, besides Italy, Germany, Noricum, Pannonia, Dalmatia, and Epirus on the western side of the Balkan peninsula, as well as Africa (with Carthage as its capital); Illyricum, with its center in Thessalonika, included Macedonia and Dacia. In the prefecture of the East were included the following dioceses: Asia (with its center in Ephesus), the united provinces located on the southwest part of Asia Minor; Pontus, with its capital in Caesarea Cappadocia, occupying the northeastern part of the peninsula of Asia Minor and the Armenian upland; Thrace (the eastern extremity of the Balkan peninsula with its center in Heraklia), on the territory of which was located also the new capital of the empire, Constantinople; Syria (with its capital, Antioch) and Egypt with Libya and the Pentapolis (the main city being Alexandria). Each diocese included several provinces. Exarchs (in Latin, vicars) were originally not the name for chief hierarchs, but for civil governors of dioceses. In the western part of the empire, exarchs corresponded to primates, for the fathers of the Council of Carthage, in canon 48 (39), forbade the use of the title exarch as incompatible with the ideal of Christian humility.

Exarchates, also called "greater districts", proved to be unstable, ephemeral formations. The process of expanding the Local Churches was not complete at this stage. Constantinople's elevated ecclesiastical status was conditioned upon its exclusive position as "the city of the Emperor and the senate". Despite Rome's objections, the Second Ecumenical Council had already established that "The bishop of Constantinople is to be honored next after the bishop of Rome" (canon 3). The Council of Chalcedon included in the jurisdiction of the bishop of Constantinople, besides Thrace, also the Asiatic and Pontus dioceses (canon 28). In the Latin half of the empire, the authority of the Roman bishop spread at first over Italy (not including the Churches of Ravenna and Milan), and then over the entire West with its three prefectures. As a result, during the era of the iconoclastic emperors, the eastern part of Illyricum, as well as Southern Italy and Sicily, were transferred from the jurisdiction of Rome to the jurisdiction of Constantinople. The Roman popes were later able, with the help of the Normans, to restore their jurisdiction over Southern Italy and Sicily, but not over eastern Illyricum, which remained forever within the boundaries of the Constantinople Patriarchate, and has therefore preserved its part in the Universal Orthodox Church. The First Ecumenical Council had already presented prerogative of honor in Palestine to the bishop of Elie-Jerusalem—the mother of all Churches (canon 7), which by the time of that Council was under the jurisdiction of the bishop of Caesarea of Palestine. This led later to the complete independence—autocephaly—of the Church of Jerusalem. The Church of Alexandria remained within the boundaries of its own diocese, which included Egypt, Syria, and Pentapolis.

That is how the five Patriarchates came to be. The term "Pentarchy" is connected with this number, which means in English, "five-rule". Thus, "Pentarchy" is no more than a fact of Church history, which existed for a certain period of time, similar to how international relations panned out after the Vienna congress, when there existed a "pentarchy" of great European nations: Russia, Austria, Great Britain, Prussia, and France.

However, in the ninth century a peculiar teaching on the pentarchy appeared—that according to the nature of things, there can in the Church be only five Patriarchs, nor more and no less, just as there are only five senses, and the whole world should be divided between these Patriarchs. The theory of "pentarchy" was defended by Patriarch Peter of Alexandria. His thoughts on this subject, contained in his epistle to the bishop of Aquileia, who had also begun to take the title of "Patriarch" in certain documents (this title later succeeded to the bishop of Venice), were entered into the Synopsis of Stephen of Ephesus, and made their way from there, through Aristenus, to the Rudder of St. Savva, and, consequently, into our [Russian] version of the Rudder: "Nowhere has it been written that the primate of Aquileia, called Venetian, be named Patriarch. In all the world there are five known Patriarchs: of Rome, Constantinople, Alexandria, Antioch, and Jerusalem. Just as our body is built of five senses, so is the Body of Christ built of five patriarchal thrones, as there are faithful Churches, like unto the five senses" (chapter 40). One supporter of this curious teaching, for all his grandiose intellect, was the famous canonist, Patriarch Theodore Balsamon of Antioch. We have essentially run into an aberration of canonical awareness characteristic of the Middle Ages, and foreign to the responsible and sober style of canonical thought present during patristic times.

The theory of "Pentarchy", deprived of both canonical and historical foundations, provided consequentially false pretexts for the defense of hegemony of Grecophone Churches over the non-Greek Orthodox Churches. The tendency expressed in this theory, as strange as it might seem, turns up from time to time in the modern era. It has the potential to become a cause for complications in relations between the eastern Patriarchates and the Local Churches that received autocephaly during the second millennium A.D.

Incidentally, the Third Ecumenical Council [431 A.D.], confirming in its eighth canon the autocephaly of the Church of Cyprus, against which Antioch argued, did not leave any reasonable ecclesiastical grounds for the development of a teaching on the exclusive primacy of the five first [patriarchal] thrones of the Christian world. Instructive is the resolution by which this canon ends: "The same rule shall be observed in the other dioceses and provinces everywhere, so that none of the God beloved Bishops shall assume control of any province which has not heretofore, from the very beginning, been under his own hand or that of his predecessors. But if any one has violently taken and subjected [a Province], he shall give it up; lest the Canons of the Fathers be transgressed; or the vanities of worldly honour be brought in under pretext of sacred office; or we lose, without knowing it, little by little, the liberty which Our Lord Jesus Christ, the Deliverer of all men, hath given us by his own Blood."

Besides the Autocephalous Church of Cyprus with its archbishop at the head, there also existed from the time of Justinian the Autocephalous Church of Justiniana Prima [dating from 535 A.D.], the primate of which had the title of Archbishop—the Archbishopric of Ochrid is mainly connected with it. Later, other Local Churches arose, and the primates of certain of them bear the title of Patriarch, which places them on an equal par with the eastern Patriarchs.